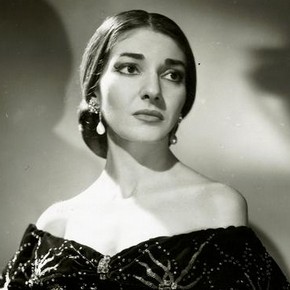 Maria Anna Sophie Cecilia Kalogeropoulos (1923 - 77), known to the world as Maria Callas, was a soprano opera singer, one of the most famous of the 20th century. She was born in New York in 1923 and made her opera debut in Greece in 1941.

Her breakthrough came in 1949 when she replaced another singer as Elvira in 'I Puritani' in Venice. She married Giovanni Battista Meneghini, a wealthy Italian industrialist and opera lover, who became her manager and promoted her as the new star in the Italian bel canto repertoire.

Callas was large and overweight – the ideal image of an opera singer at that time. In 1954, she suddenly lost 30 kilos and the promising singer became a glamorous, news-worthy temperamental opera star. The media made less of her successful debuts in New York, London and Paris than her walk-outs from productions, quarrels with managements, firing from the Metropolitan Opera in New York and affair with the Greek shipping magnate, Aristotle Onassis.

In 1964 Callas starred in 'Tosca' at Covent Garden. The performances are remembered as among the greatest opera experiences of all time. Purists carped that the voice was not always perfect, but it was faultless in communicating raw emotion, passion and heart-stopping suspense. Truth, not sterile perfection, was her aim. 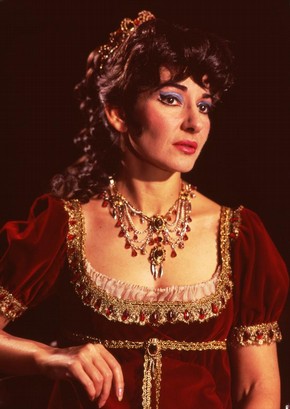 A year later she was ill, but insisted on singing 'Tosca' at a Royal gala in London. It was her last opera appearance. Then in 1968 Onassis married Jacqueline Kennedy, widow of assassinated US president J F Kennedy. A devastated Callas withdrew from public life. Apart from a few master classes and a concert tour, she lived as a recluse in Paris. She died in 1977.

This photograph shows Maria Callas as Floria Tosca in Act II of Puccini’s opera 'Tosca' at Covent Garden. This was the role in which Callas made a triumphant return to opera after a period of vocal difficulties which had kept her off stage for several years.

In a new production specifically mounted for her by Franco Zeffirelli and co-starring the great baritone Tito Gobbi as the evil Scarpia, Callas redefined forever the role of the temperamental diva forced to take drastic action whilst her lover is being tortured. Some dedicated fans queued for 48 hours for standing places for the performances, whilst tickets were exchanged on the black market  for £50 (about £600 today). Such was the success of the production that ITV broadcast the entire Second Act at short notice on The Golden Hour to an audience of over one and a half million viewers in London.

Callas’s interpretation of Tosca was so memorable that even today it is the yardstick by which every soprano attempting the role is measured.