Hunting in the medieval period was a sport exclusive to royalty and the aristocracy, and was more than a pastime. The elaborate rituals of the hunt were an integral part of court etiquette, and skill in hunting was regarded as the peacetime equivalent of prowess in chivalric wars. The supply of game was essential to ensure the variety of dishes necessary for the tables of the nobility.

Very little costume survives from this period, but this tapestry gives a good indication of the extravagant fashions of the Burgundian court – the nobles wear costly silks and furs rather than practical hunting clothes.

Wild boars were pursued for both sport and meat. Their size, strength and sharp tusks made them a dangerous quarry. Nobles lavished large sums of money on packs of specially bred hounds. Bears were hunted for sport only, and wild bears had already been hunted to extinction in England by the time this tapestry was woven. Like boars, they were dangerous. In 1391 Gaston Phoebus, Count of Foix and author of a popular hunting manual, was killed during a bear hunt. Boar hunts usually took place in winter, though the tapestry shows a hunt set against a background of woodland in springtime. This was probably so that during the winter months the tapestry could bring colour to the interior in which it hung and remind people of more pleasant months ahead.

Sir Gawain and the Green Knight

This poem, thought to have been written towards the end of the 14th century, is one of the finest surviving examples of Middle English  poetry. Sir Gawain is one of the Knights of the Round Table, and the opening scenes of the poem are set at King Arthur's court at Camelot.

The poem's themes of bravery, chivalric virtue and courtly love are reflected in numerous objects in the V&A's collections. Hunting scenes were frequently depicted in medieval and Renaissance art, and like those depicted on the Boar and Bear Hunt tapestry, were often used as a metaphor for love and desire. In Sir Gawain and the Green Knight, scenes of courtship and hunting are skilfully and deliberately juxtaposed. Its vivid description of a lord's boar hunt is both a realistic depiction, conveying the thrill of the chase, and an ironic counterpoint to attempts by the lord's wife to seduce their guest, Sir Gawain.

In the audio below,  the poet Simon Armitage discusses the boar hunt scene in Sir Gawain, and reads an excerpt from his translation of the poem.

Male Narrator:
In the literature of the 12th to 14th centuries, the hunt was a common theme. In fact, the hunter's pursuit of his quarry was often used as a metaphor for the pursuit of love. Sir Gawain and the Green Knight is one of the finest English poems of the late 14th century. Its vivid description of a lord's boar hunt is both a realistic depiction, conveying the thrill of the chase, and an ironic counterpoint to attempts by the lord's wife to seduce their guest, Sir Gawain. Poet Simon Armitage tells us more and reads from his translation of the poem.

Simon Armitage:
'They have these exquisite and sometimes excruciating courtship scenes in Gawain's bedchamber where the lady of the house is trying everything within her powers and everything within human decency to tempt him out of the bed sheets or to make her own way into the bed sheets and Gawain skilfully and with great diplomacy manages to defend his honour and perhaps hers as well. But those scenes are intercut and interwoven, sometimes quite abruptly, with visceral and graphic hunting scenes in which the animals in question aren't only caught, they are 'grolloched' on the ground, by which I mean they are butchered, taken apart, and no detail is spared… We see the flesh, we see the blood, we see the guts and the gory details and I think these are often in lieu of what our imagination might be telling us could have happened in the bedroom.'

Roused and risen he was ready for Mass. The meal of the morning was
made and served, then he loitered with the ladies the length of the day
while the lord of the land ranged left and right in pursuit of that pig which
stampeded through the uplands, breaking his best hounds with its back-
snapping bite when it stood embattled ... then bowmen would strike,
goading it to gallop into open ground where the air was alive with the
huntsmen's arrows. That boar made the best men flinch and bolt, till at
last his legs were like lead beneath him, and he hobbled away to hunker
in a hole by a stony rise at the side of a stream. With the bank at his
back he scrapes and burrows, frothing and foaming foully at the mouth,
whetting his white tusks. The hunters waited, irked by the effort of
aiming from afar but daunted by the danger of daring to venture too
near. So many men before had fallen prey. They feared that fierce and
frenzied boar whose tusks could slash and tear.

Till his lordship hacks up, urging on his horse, spots the swine at
standstill encircled by men, then handsomely dismounts and unhands
his horse, brandishes a bright sword and goes bounding onwards,
wades through the water to where the beast waits. Aware that the man
was wafting a weapon the hog's hairs stood on end, and its howling
grunt made the fellows there fear for their master's fate. Then the boar
burst forward, bounded at the lord, so that beast and hunter both went
bundling into white water, and the swine came off worst, because the
moment they clashed the man found his mark, knifing the boar's neck,
nailing his prey, hammering it to the hilt, bursting the hog's heart.
Screaming, it was swept downstream, almost slipping beneath. At least
a hundred hounds latch on with tearing teeth. Then, dragged to drier
ground, the dogs complete its death. 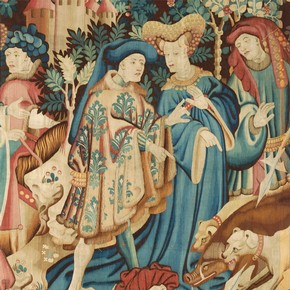 Hunting scenes were common subjects in medieval and Renaissance art. The excitement of the hunt was also captured in a special type of song known as a caccia, from the Italian meaning 'hunt' or 'chase'. In this example, the voices of the two singers seem to chase one another and are accompanied by a lute played with a plectrum. These types of song were written from the man's point of view and were sung by men. This caccia is called Hounds At Court and Dogs in the Forest. The Italian words vividly describes a hunting expedition; with sounds that evoke dogs barking, hunters shouting and horns calling.

The caccia was particularly popular in the 14th century and was written for the enjoyment of the European nobility; an audience that appreciated music, poetry and hunting.

This recording was made by the Royal College of Music especially for the Medieval & Renaissance Galleries thanks to an award from the Arts and Humanities Research Council.
Download: mp3 | ogg View transcript

At the sound of the horns and from the other storm
A country lass came out of the valley
'Ay, ay a fox is over there'
So I took her by the hand
'Come here, come here, come here
let the fox go'
She said 'hey no, hey no, because I don't want to'
Even then I embraced her because pride isn't worth it
And I took her into the woods.