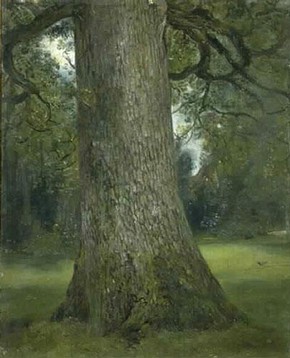 John Constable loved trees as he loved people. His friend C R Leslie remembered that he had often seen Constable 'admire a fine tree with an ecstasy of delight like that with which he would catch up a beautiful child in his arms'. And of all trees, Constable loved the elm most. In Dedham Vale were chieftain elms twice as old in years as they were high in feet - and they were hundreds of feet high. Smaller elms grew through and into the hedgerows, and lined the banks of the Stour, and flanked Dedham's churches. Sentinel elms were planted to mark the old ways, the drover's roads, so that they could be followed in mist: trees as way-finder, map-marker.

Constable sketched and studied the elms, and he loved all their aspects. He loved the elmy underworld, the shady green-gold leaf-dropped damp circle beneath the first boughs, and he loved the canopy-world of their branches, which on the great elms could spread over a quarter of an acre of sky. He painted better than any other landscape artist the visual effects of elmyness: light falling through its dark leaves, to form luminous dapplings and reticulations. 'Painting is with me but another word for feeling', he wrote, and he felt so strongly for the elms that sometimes he dreamed them into existence where they were not. The 1826 sketch for his painting 'The Lock' shows massive willows on the towpath; when he worked the sketch up into a canvas, he transformed the willows into elms.

Constable loved, too, the trunk of elms, the meeting of trunk and earth, the rough mazy mappish underworld of bark and root flare. In his 1821 study of a nameless Dedham elm, the foliage of the tree, its spreading cloud of leaves, is forgotten, so too is its height, its volume, and the aerial world it commands. For this is painting bent low, the work of a bark-lover, a root-fossicker. The tree is an English elm: we know this for its bark has cracked into parched-earth patterns, where the bark of the Wych elm and the Huntingdon elm would have fractured more linearly, into long crevasses and furrows, and the Smooth-Leaved elm would have formed a regularly reticulated meshwork of angled crossing ridges and valleys.

The painting is a study - as all paintings in some sense are - of permanence and transience. There is the root-work of the tree, its great delving into the ground, where it has dwelt for scores of years and will dwell for scores more. And then there is the light, falling generously and temporarily upon the grass behind. Occupying a time-scale somewhere between them is the bark of the trunk, a flexing, extraordinary substance. If you were to take slow-motion footage of elm bark over a year, you would be able to see it moving, working, living: crevasses gapping, callouses forming, the constant springing open and closing over of fissures.

Bark is a subtle, supple substance, easily overlooked. It can be thought of as the tree's skin, except that where our skin carries the marks of folding and compression, the skin of a tree carries the marks of expansion, which cracks it into flakes or plates or lenticles. As Constable knew, with attention, with a particularity of looking, a world reveals itself in a tree's bark. Lean in close to bark, and you will find a landscape which you might enter, through whose ravines and ridges you might make day-long journeys. Above all, perhaps, bark resembles a map. Constable saw this, too, the map-making instincts of bark, how it seems to make and unmake the topographies of imaginary countries and continents, as the shedding and replenishing archipelago maps of the plane tree. I have often thought of trees as cartographers, for they map themselves in so many ways. Most astonishing of all to me are the strange internal maps that burr and grain of wood create; the sun-burnished atolls in a caramel sea mapped in walnut burr, for instance, or elm veneer seen in cross-section, which is a contour map of hill-country. W. H. Auden once said that if he could design his own landscape, it would be an island with 'limestone uplands like the Pennines plus a small region of igneous rocks with at least one extinct volcano, and a precipitous and indented sea-coast.' I have sometimes thought that my perfect landscape would be a mountainous world designed according to the grain of an elm tree thrown into relief. 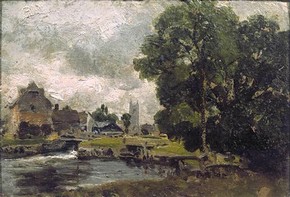 Constable's image is a study of rootedness, too, for the elms were among the first inhabitants of the landscape we now call East Anglia. They came to Norfolk, Suffolk, and Essex eight thousand years ago, as part of the wildwood which came to cover the British Isles during the final centuries of the last Ice Age, when the glaciers, which for millennia had covered all but the southern parts of the land, began their retreat.

To conceive of the history of those years, which existed before human record, one has to reset the chronometers of one's imagination, and to think, if it is possible, in ice-time and in tree-time. One has to imagine the air temperature rising, in tiny increments, over thousands of years. One has to imagine the fall of heavy warm rain on the grey backs of the glaciers, and the great blue glacial prows which marked the outworks of the ice, some of them thousands of metres high, starting to return northwards, back to the old mountains and the high corries out of which the ice had first been born.

The ice ceded ground at roughly fifty miles a century, half a mile a year. It left behind it a transformed terrain: hills which it had halved in height, and valleys which it had doubled in depth, harrowing them out with great blue meltwater rivers that ran from the snouts of the glaciers. But as the ice retreated up through the land - lobes, fingers, sheets, reversing irregularly, northering - so the trees, which had been shorn from the land by the advance of the glaciers, returned. A slow cede of ground occurred, from the blue ice to the green wood. And in the south-eastern counties, it was chiefly oaks and elms that grew, there on the flatlands, spreading in magnificent waves across the gently undulating country right down to the coast.

The elm arrived in the eastern counties slowly, but it left them fast. In 1975, Dutch Elm disease spread from the south coast of England into East Anglia. Within two or three summers there were few great elms left alive. Within ten years, thirty million elms had died. Many millions more have died since. Though the elm is not extinct in England, it is devastated.

So it was that Constable's nameless beloved elm died, along with all the other great elms which lined the Stour, and struck their great single verticals in the skyline of the Dedham Vale. His elm would have died as all the others died. First its finely serrated leaves, with their racing-green uppers, and silver-green undersides, would have curled and browned and crisped. Then the branches would have wilted and drooped. And then the bark itself would have hardened and scabbed off, to reveal bare trunk wood beneath, which would have been so smooth, pale and sheeny that it could not help but recall bone. 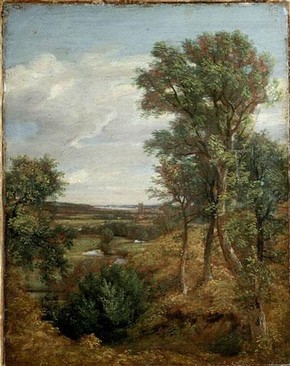 The bark, which Constable so lovingly recorded, was the death of the tree. Dutch Elm disease is a fungus, which disperses itself with an efficiency that is chilling. For its spores are spread by its vector, the native elm bark beetle, Scolytus scolytus. The beetles lay their eggs in the bark of dying elms and the larvae form networks of tunnels, which are known as galleries, under the dead bark. The fungi produce sticky spores on the walls of these galleries, so when the larvae mature into adult beetles, and emerge they are already contaminated with spores. They fly off to healthy elms, and feed off its living bark, and there deposit the spores of the fungus. The fungus spreads through the root systems of a tree with remarkable speed, causing the capillaries to tighten. The tree's water conduction system fails. It dehydrates to death.

Dutch Elm Disease is a scourge that has obliterated an entire species, an affliction so particular and efficiently malevolent in its targeting, that one cannot help but think of smart bombing, of targeted airstrikes. Airborne beetles, seeking and destroying each tree in turn, sparing the oak to the elm's left, the hornbeam to its right.

The forms and patterns left by the beetles beneath the bark are eerily beautiful. The beetles form nuptial chambers, in which they breed, and feeding galleries radiate off this central channel, bored by larvae. The forms left by the presence resemble emanations from a single centre, radiations from a dark sun, or perhaps a winged creature, or trilobitic fossil.  It is that the bark-beetles have been called 'engravers', for the distinctive linear pattern they leave on the inside of the bark, resembles the work of a skilled mason, lettering a headstone.

The devastation of the elm, to some, seemed a prophecy fulfilled. For the elm has long been associated with death. In country lore, it was known as the tree of ill-omen. It was ascribed a maliciousness; if one loitered beneath it, branches were thought to drop killingly from the acreage of the canopy. The tree's habit of throwing out one strong side branch also made it a popular gallows tree. And, at last, elm-wood was for a long time the staple wood of the coffin-maker.

How these associations of death have been tinged with truth by history. So synonymous is the elm with death now in England, that we cannot help but look at Constable's paintings as elegies for the elm, that we cannot help but hear the hint of mortality in the name of Dedham Vale. I have found, for reasons I am unable to explain, that I cannot look at the outline of an image of a great English elm without seeing the form of a shell blast. They seem to me have the form of the bomb-cloud about them, with their high columnar trunks, and the great high unfurlings of foliage. Edward Thomas, who would die from just such a shell blast in 1917, wrote in 1916 a poem which described how he had sat by a woodpecker's hole in the crest of a blizzard-felled elm, conversing with a ploughman, intermittently, as the horses turn, and the sillion is turned by the plough, and curls and topples, clay into clay.

So the elms have died, and the bark of the land has been changed by their dying. And yet, the elm is not extinct. Though its associations with death are formidable, so too is its capacity for survival and life. I spoke once with a woodsman and furniture-maker, who told me that elm is a magnificent timbering wood, for it continues to live and breathe long after it has been carpentered into a table or floor. Its vitality, he said, is exceptional among woods. He told me, too, that the elm would return to England, that I should not worry, that in due course the elm would rise again.