'The artist's main business is to train his eye to see, then to probe, and then to train his hand to work in sympathy with his eye.'  John Nash 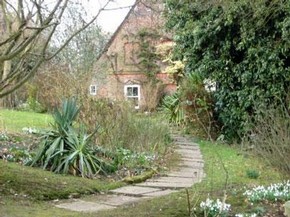 According to writer Ronald Blythe, whose book 'Akenfield' in many ways pioneered the current trend in psychogeographical writing in Britain, John Nash first arrived in Wormingford in June 1929, where he and his wife Christine rented a little clapboard bungalow, now no more, which in those days stood next to Wormingford Mill.

Nash had fought on the Western Front with the Artists' Rifles, and as official War Artist painted the haunting 'Oppy Wood' (1917) and 'Over the Top' (1918), while now he stood at the vanguard of the new vogue in book illustration which had taken wing in the 1920s, with books such as Milton's 'Hymn on the Morning of Christ's Nativity', Swift's 'Directions for Servants', Ovid's 'Elegies', Spenser's 'The Shepheard's Calendar' and Walter de la Mare's 'Seven Short Stories' behind him. 'Good river scenery.' Christine wrote on a postcard to her Mother. 'Think we may stay here.'

Her words were prophetic: as a cold and wet June metamorphosed into a hot summer, the Nashes quickly fell in love with the area, and in 1943 they purchased the rundown farmhouse, Bottengoms, where John, a passionate amateur gardener, was to create the garden of his dreams. Helped by the villagers the rubbish was quickly swept away and beds were cut, the horse-ponds were cleared and planted with bamboo, paths laid down and an orchard made. As Ronald Blythe recalls: 'With the aid of a succession of jobbing gardeners (come to think of it, I can't recall seeing John actually digging) a Nash jungle of old roses, bulbs and flowers of every kind replaced the bramble, elder and nettle jungle, and during high summer with very near the same density. Nightingales sang against the sound of the piano or the push-lawnmower and, in winter, owls hooted from the collapsing barn and sheds.' 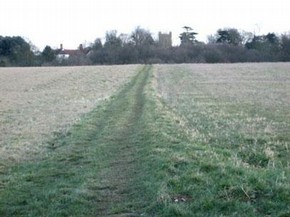 Plants from his garden served in later years as specimens for the numerous botanical books and magazines he illustrated, filled with exquisite watercolours of irises, sunflowers, autumn crocuses, house-leeks and thistles, and they served too as models for his students at the Royal College of Art, Colchester Art School, and Flatford Mill Field Centre, where for many years Nash conducted a course on plant illustration in the mill on the Stour formerly owned by John Constable's family.

Nash liked to surprise his friends with the unexpectedly hilly local landscapes which he jokingly referred to as the 'Essex-Suffolk highlands,' scenery which he captured in paintings like 'Winter Afternoon' (1950) and 'Ice and Snow' (1969). Many of Nash's most memorable paintings after those he undertook as official War Artist are landscapes, and many of the best of these were painted in Wormingford, such as 'Wormingford Mill' (1930), 'The Mill Pond' (1936) and 'Disused Canal' at Wormingford (1958). A number of landscapes, indeed, represent views form Bottengoms, such as 'Bottengoms Farmyard' (1950), 'Frozen Ponds' (1959), 'The Garden in Winter' (1964) and 'Pheasants in the Snow' (1968), though Nash never actually painted the farmhouse itself. It is as if this, the still and silent hub of his activity, from where he would set out to Skye or St Austell in search of new landscapes, or drive off in his Talbot motor-car after new plant specimens, was in itself unrepresentable.

John Nash died in September 1977, aged 84. He is buried with his wife in Wormingford churchyard, overlooking the panorama of fields and woodland amongst which he had made his life for over fifty years.

A walk in John Nash's Wormingford 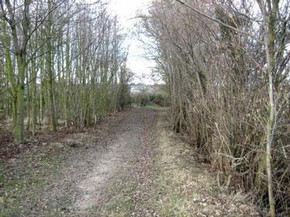 View of a walk around Wormingford. Photograph by Philip Terry

Downhill from Wormingford Church take the public footpath on the opposite side of the street to Colchester Road. At the school take the marked footpath on the right and proceed across an open field, continuing, with a hedge on your left, until you reach a stile beside a gate. Cross it and walk to the bottom of the lane, turning right when you meet the road. As the road bends right, continue straight on across two stiles taking you through fields until you emerge on a road. Turn right, continue until you meet a crossroads, and then take School Road on your left, continuing until you reach a cream coloured farmhouse. Take the dirt track on the left which leads to Bottengoms. Continue past Bottengoms, keeping the pond on your right, until you meet a tarmac road. Turn left and climb the hill.  Where the road turns to the left, take the footpath across fields on your right. Follow it across a wooden bridge and stiles, turning right at the farmhouse at the top of the hill. Follow the path with a hedge on your left, then at the bottom of the field take a left turn and proceed until the footpath turns left. Follow the path to the main road, then turn right, making your way to Wormingford Mill. Follow footpath signs taking you past the mill, with the millpond on your right, and proceed across a stile, climbing a hill on your right. Go through a kissing gate at the top, turn left, and proceed through another kissing gate to Wormingford Church.