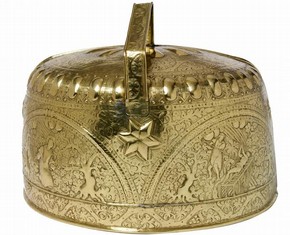 Embossing involves hammering a design onto a surface from behind so that the decoration is lifted from its surrounding ornament. This fireguard has a mixture of embossed and engraved decoration to create areas of high contrast and reflection. The engraving shows the burning of St Laurence on a gridiron, his penalty for giving the Church's treasures to the poor rather than to the Roman emperor.

The fireguard is known as a 'curfew', a corruption of the French 'couvre feu' (fire cover). Curfews kept the fire embers smouldering at night ready for reviving the next morning. This is one of the earliest to survive in brass. 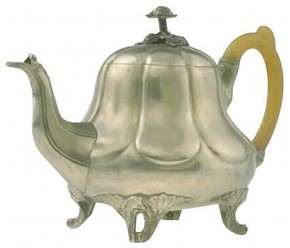 Britannia metal is often mistaken for pewter. Developed in response to the Sheffield plate industry, it borrowed much of the technology. The lobes on this teapot, like Sheffield plate, were stamped in a high powered machine called a fly-press. By the 1850s, the use of Britannia metal superseded pewter for cheap mass-produced items. Britannia metal and modern pewter, containing antimony and no lead, are virtually indistinguishable.

Engravers created designs on objects by removing lines of metal from the surface using a tool called a 'burin'. Engravers were specialists who worked on both copperplates for printing and finished metal objects. They worked from books of ornament and prints, sometimes based on paintings of the time. The lively mixture of tulips, sunflowers and irises on this box demonstrates the 17th-century Dutch passion for botanical illustration and relates to the contemporary fashion for still-life painting.

This dish is decorated with 'wrigglework'. A sharp tool, walked in a zigzag motion on the metal, created broken lines of engraving.

Wrigglework was fashionable in England and the Netherlands between 1660 and 1730. Most wrigglework decoration depicts flowers, birds and animals in the spirit of late 17th-century needlework and delftware. Similarities in design suggest that engravers used established patterns to decorated dishes, tankards and beakers. As no two designs are identical, they were probably applied freehand.

In general customers in shops or at fairs probably bought blank items and chose their decoration. Spectacular commemorative pieces for display on buffets however, were probably sold 'finished'. This 'charger' or dish is engraved with the royal arms, patriotic motifs including acorns and roses, and a Latin inscription celebrating Charles II's role as a peacemaker. 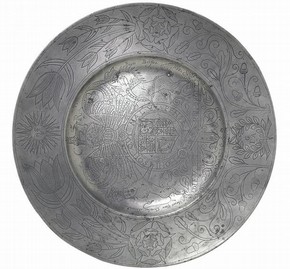 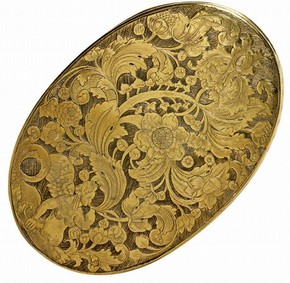 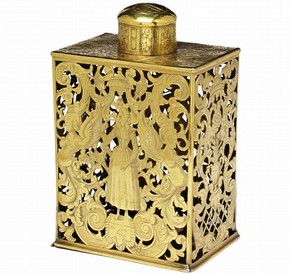 The man smoking a pipe indicates that this was a casing for a glass tobacco jar. The pierced holes and fine engraving give a three-dimensional effect. Piercing is highly skilled work. Holes are drilled so that a piece of wire can be fed through and joined at both ends to a handle to create a wire saw. Each piercing is sawn individually. 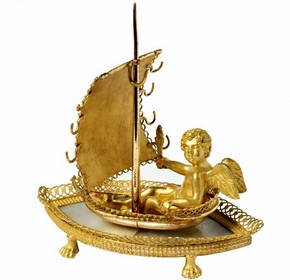 Gilding was a dangerous process. It involved mixing gold powder into a paste with mercury, painting the mixture onto the brass and then burning off the mercury, the fumes of which were highly toxic.

This ring stand is a small luxury item known as Palais Royal work. A trade in this work was established in the shops of the Palais Royal in Paris in the late 18th century, usually in goods such as jewellery stands, candlesticks and small boxes made in engraved mother-of-pearl and gilt-brass.

This ring stand was probably part of a toilet set on a dressing table. It came to the V&A in 1987 as part of a large bequest of late Empire period French metalwork, ceramics and furniture collected in Paris by Sir Charles Stuart (1779-1845), 1st Lord Stuart de Rothesay. 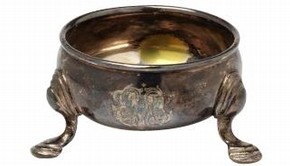 Copper alloys can taint food and drink, so protective silvering and tinning were common. Silvered brass offered a cheaper alternative to silver. The silvering of this piece has been renewed, but it must still have been quite convincing when it was first done. On the base are false marks imitating standard silver hallmarks.

This candlestick is from a group of enamelled brasswares including mirror frames, stirrups, firedogs, sconces and sword hilts, apparently dating from 1645–80. They are sometimes referred to as 'Surrey Enamels' as it was once assumed they originated in a workshop in Esher in Surrey. Questions of authenticity have plagued them as they attracted Victorian collectors who were sometimes inclined to 'improve' objects. Surviving evidence suggests they are the work of one workshop, that of Anthony Hatch, a prominent member of London's Armourers' and Brasiers' Company.

The candlestick was cast with rows of leaves and grapes in alternating hollows. These were filled with blue, black and white powdered enamel, then fired in a kiln, a technique known as 'champlevé' ('raised field') enamel.

Knife and fork
The handles on this knife and fork are made of turquoise enamel over a copper sheath. Enamel is a glass-like composition. Inlaid as a powder, it fuses after being fired in a kiln. Silver wire twisted around the handle adds both decoration and support. 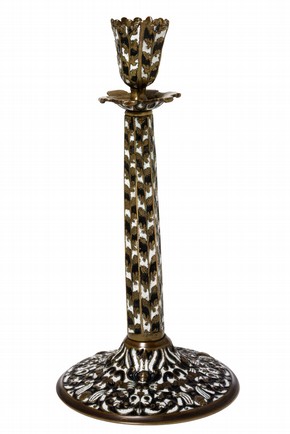 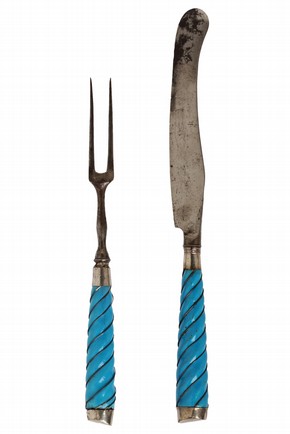