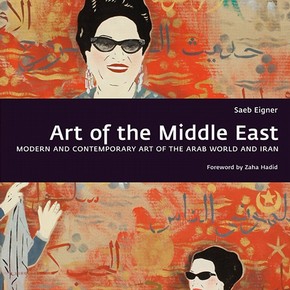 The V&A was the first institution in the world to form a systematic collection of the Islamic arts, including books and catalogues on these subjects in the museum’s library, the National Art Library. At first these traditions were viewed mainly from a historic perspective, emphasising their influence on western arts.  Increasingly however the vitality and importance of modern and contemporary art and design from the Arab world, Iran and Turkey has come to be understood and valued in the V&A.

In 2009 the Museum launched the biennial Jameel Prize https://www.vam.ac.uk/page/j/jameel-prize/. With the great help of curators from the V&A’s Middle Eastern section, in 2012 the National Art Library has inaugurated a new programme of collecting, with the aim of becoming the foremost public research collection in London for documenting contemporary and modern art and design of the Arab region, Turkey and Iran.

The National Art Library collects art publications including monographs, art magazines and journals, artists’ books, exhibition catalogues and associated ephemera, biennial catalogues, and other material that document the developing artistic trends of these regions. We also have a growing collection of comic books and graphic novels from and about the region.

To date, contributors from both in and outside of the Middle East include commercial galleries, museums and arts institutions, publishing houses, artists and other individuals from the UAE, Bahrain, Egypt, Iran, the UK, Syria and Turkey among others.

With over 600 publications so far, much of the material in these collections has been donated from participating institutions and individuals. Some of our key partners are listed below.


Searching for material in the National Art Library

In order to explore these collections, researchers can use the NAL Catalogue and keyword search by individual artists' names (where known), by names of institutions listed above or by using our various subject indices and searching by any of the suggested subject and genre headings below.

Or try searching under other subjects in conjunction with specific countries or regions, for example, Artists - Turkey