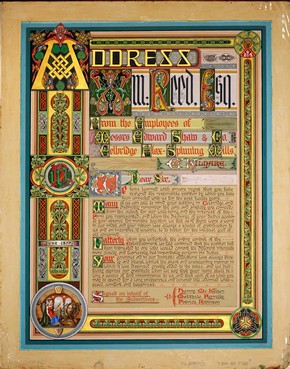 The National Art Library at the Victoria and Albert Museum has long had a special interest in calligraphy and lettering. In the 19th century it collected all the standard manuals on the subject, from those by the 'illuminating designer' Victor Touche, The Handbook of Initial Letters that first came out in 1863, and the works by Digby Wyatt and W.R. Tymms on illumination, to the Alphabets Old and New of Lewis F. Day that appeared in 1898, and Edward Strange's Alphabets, a Handbook of Lettering that went into numerous editions after its initial appearance in 1895. The Library has since collected examples of the illumination and lettering that flourished as an essential ingredient of Victorian decorative art, from an illuminated address of 1877 to the owner of a County Kildare spinning mill from his employees (MSL/1984/69/2), to similar addresses in the form of volumes done by a Liverpool 'Illuminator,' James Orr Marples in 1902 for a retiring chairman of the American Shipping Line (MSL/1983/40), and a presentation to a member of the Ancient Order of Foresters done in 1912 by one Sydney Davis, 'Lithographic writer, draughtsman and illuminator' (MSL/1984/56).

What we usually refer to as modern calligraphy stemmed out of the Arts and Crafts Movement in the last years of the 19th century. The interest of William Morris, president of the Arts and Crafts Exhibition Society from 1893 to 1896, in calligraphy is well known. Apart from his famous 'Book of Verse' designed and written for Lady Burne-Jones in 1870, the Library also has a draft of part of Omar Khayyam written in Morris's calligraphic hand in 1874. These came to the Library with papers of Sir Sydney Cockerell, a man who had been Morris's secretary and retired as director of the Fitzwilliam Museum in Cambridge in 1937.

Other people associated with the Arts and Crafts Movement that took an interest in calligraphy were Walter Crane and C.F.A. Voysey – work by both was reproduced in Strange's Alphabets, a book commended later by Edward Johnston. If modern calligraphy begins with Edward Johnston, we should not forget that it was William Lethaby, founder of the Central School of Arts and Crafts in London, who started the process whereby calligraphy became an essential part of teaching in art schools throughout the country when he appointed Johnston to teach the subject in 1899.

The V&A acquired its first example of Johnston's work in 1928; the National Art Library waited until 1934 before his work entered its collections. Despite a late start, the library today has a large collection of modern calligraphy of the kind promoted by Johnston. What follows sets out to show its importance as a source for the history of calligraphy in the 20th century. 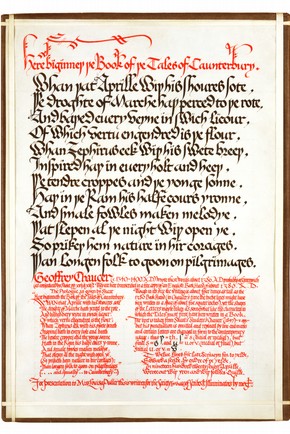 Johnston's influence was transmitted, as is well known, not only by teaching, but also by lecturing and publication. A fair copy of the lecture that he gave before the Royal Society of Arts in January 1905 was acquired by the library in 1954 (MSL/1954/2482). Through Sydney Cockerell, the library received Johnston's own copies of the vastly influential Writing & Illuminating, & Lettering in the editions of 1906, 1913 and 1942. All are extensively annotated in Johnston's hand. The first edition of the book was produced at a time when Johnston based his teaching on a 'formal hand' that took English half-uncials of the 8th century as their model. This upright round hand was to be written with a square-cut flat pen. An impressive example in the Library's collection is the 'Order of the administration of the Lord's supper' with a colophon dated 30 April 1900 (MSL/1946/131), bound by Douglas Cockerell in 1902. Johnston was able to emulate the skill of late medieval professional scribes who could write in a variety of hands. He had developed his foundational hand, written with a slanting pen and oblique nib by this time. It was based, as is well known, on 10th-century Winchester manuscripts. (The term 'foundational' first appeared in 1913 in the magazine 'Imprint'.) Johnston produced a spectacular demonstration of this and a number of other scripts the following year in a work written out for Sydney Cockerell, The House of David, His Inheritance: A Book of Sample Scripts, this was published as a facsimile by the V&A in 1966. The colophon identifies the scripts as 'foundational hand,' 'black italic,' 'small Roman,' 'Roman capitals', and 'modern half-uncial', the latter "based on round skeleton forms approximated to Uncial character used by the writer as an educational hand since 1900 AD." There are also some Greek uncials in the manuscript; in the draft which is kept with it, Johnston reveals his source as the 3rd-century Ambrosian Homer reproduced in the Palaeographical Society's publications. His mastery of this script goes back at least to 1910, the year in which he produced a folio containing an extract from the Odyssey now in the Library (Circ.339-1961).

Johnston's use of Roman capitals in the manuscript of 1914 is of some significance: in 1913 he had undertaken to produce for London Transport, at the instigation of Frank Pick, an alphabet for the underground railway based on the sans-serif letter used in Victorian times for commercial purposes, but with the vigour and proportion of the great Renaissance scripts. The result, still in use today, is one of Johnston's greatest achievements. The drawings for it are today in the Department of Designs, Prints and Drawings of the V&A (E.47-1936 to 50-1936).

Johnston began to develop his cursive gothic hand in 1924 when he was asked to complete a 14th-century English manuscript of Chaucer. It was this script that Johnston used for an extract from the Canterbury Tales presented to Louisa Puller by the Society of Scribes and Illuminators in 1927 (MSL/1964/1879).

Johnston certainly formed an 'English' school of modern calligraphy, one whose tradition is carried on by the Society of Scribes and Illuminators. His influence can be followed throughout the greater part of the National Art Library's modern calligraphy collection. An early and celebrated pupil of Johnston was William Graily Hewitt. Like Johnston, he was a student of medieval calligraphy and especially of gilding techniques, a virtuoso display of which was done in platinum and gold on purple vellum for Sydney Cockerell in 1903 (MSL/1958/324). As early as 1904 Hewitt contemplated setting up a cooperative scriptorium on medieval lines, an aim which seems to have been fulfilled in his work to produce memorials for the fallen in World War I. His aim was to produce work that was technically perfect rather than artistically inventive. Thus we find in the library's collection three copies of the poem Princess Chloris in identical format, apparently all done in 1919, or some ten years later a lovely copy of The Tempest illuminated by Ida Henstock (MSL/1946/1801), with whom he collaborated regularly to produce manuscripts. 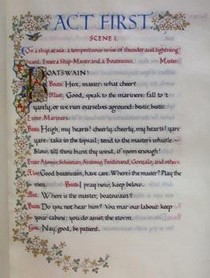 Graily Hewitt's approach to his work is perhaps summed up in the work he did for the Ashendene Press. Charles St. John Hornby prevailed upon Hewitt to provide manuscript initials in red, blue and burnished gold for the version of 'Song of Songs' that he printed in 1902. This was an edition that was also luxuriously illuminated by one of Edward Johnston's pupils, Florence Kingsford. The Library's copy of this work (L.1568-1905) demonstrates Hewitt's willingness to put his art at the service of a cooperative venture. It is worth remarking that Johnston too had been involved in the design of books. His design of italic type for the Cranach Press is well known, his designs for titling in Doves Press books perhaps less so.

Typography was certainly a secondary interest for Johnston, but his draft lettering and trials for the titling of the Doves Press edition of Milton's Areopagitica (1907) show his meticulous study of the problems of layout and design (L.2029a-1922 to 2029e-1922). What he was producing here was, of course, a design to be printed rather than a manuscript element to be added to each copy of the book as in the case of Graily Hewitt.

The Library's collection contains the work of many scribes who studied under Johnston and who promoted his teaching. These range from early pupils, such as Florence Kingsford, Louise Lessore and Percy John Smith, to people like M. C. Oliver, Thomas Swindlehurst and Irene Wellington. The latter was a major figure in modern British calligraphy: she acted as Johnston's student assistant at the Royal College of Art between 1928 and 1930 and taught at the Central School until 1959; she was the teacher of such contemporary scribes as Ann Hechle and Donald Jackson.

There is one current of modern calligraphy that takes its inspiration from 15th- and 16th-century Italian scribes. Its promoters were bathed in the scholarship of the Italian Renaissance and made significant discoveries that extend our knowledge of the work of such writing masters as Bartolmeo San Vito, Antonio Tophio and Pierantonio Sallando. The italic handwriting movement owed much to Alfred Fairbank, whose published works with Berthold Wolpe (Renaissance Handwriting, 1960) and Bruce Dickens (Italic Hand in Tudor Cambridge, 1962) are well known. The Library's examples of Fairbank's work are confined to products of his early years, such as the poem 'The Bride' by Ralph Hodgson written out in 1926 (MSL/1934/4617). It may be appropriate to mention as well James Wardrop, who had an accomplished italic hand: he was on the staff of the National Art Library from 1929 until his death in 1957, was involved with the Gregynog Press just before World War II, and had his major work of scholarship, The Script of Humanism ...1460-1560 published posthumously in 1963. 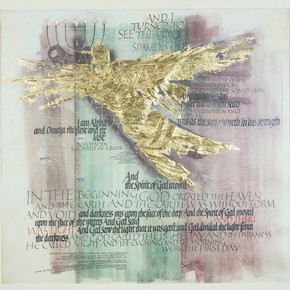 What finally of the work of contemporary scribes in the collection? Most of the ninety or so scribes and lettering artists represented are alive today. Much, but by no means all, represent the best of the Edward Johnston tradition. Scribes such as Ann Camp, Joan Pilsbury, Ann Hechle and Heather Child were taught by Johnston's early pupils. The two last mentioned are represented by works commissioned for the V&A, Hechle's 'Calligraphic Sampler' (MSL/1980/182) and Child's 'Sun in Splendour' (MSL/1980/177). The work of Donald Jackson, 'Tree of Life' (MSL/1980/179), shows immaculate lettering with perhaps rather broader artistic aims.

A different tradition is evidenced by the work of German scribes such as Werner Schneider, Friedrich Neugebauer, Karlgeorg Hoefer and Friedrich Poppl, all of whom are represented. The combination here of carefully studied letter shapes, calligraphic movement and artistic invention may be related to the fact that many of these people had a background in typography and graphic design, which differs from that of most British calligraphers.

It may be best to end on a forward-looking note. The collection is not strong enough on American calligraphy, though there is work by figures such as Egdon Margo and Byron J. Macdonald who came to calligraphy from a commercial rather than an 'arts and crafts' background. The aim is certainly to document the work of contemporary scribes and to make a collection that is international in scope. It is hoped that this will allow British students of calligraphy ease of access to work from Continental Europe and elsewhere, and provide a core of representative British material for visitors from abroad.

The National Art Library's most recent major addition to its calligraphy collection is by the American calligrapher, Thomas Ingmire (MSL/1995/9). The working papers of Vera Law, including three pieces of gilding and calligraphy, were recently donated by her cousin (MSL/1995/3). Correspondence and drafts for Graily Hewitt's Lettering for Students and Craftsmen (1930) also joined the collection in 1995.

Examples of calligraphy can be found listed in the 'Physical features' index to the Library's Computer Catalogue.