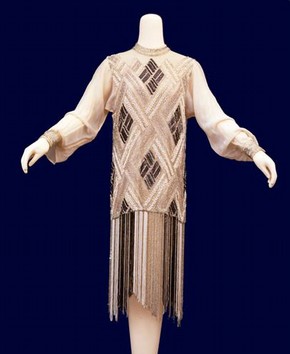 Most actors in the 18th and 19th centuries had to supply their own costumes and accessories for modern dress roles, as did actors in repertory companies up to the 1950s. Today costumes are specially designed and budgeted into the production costs.

Until Isaac Singer developed the first commercially successful sewing machine in the 1850s, all sewing and embroidery was done by hand.

Until recently, almost every girl learned to sew, and in the 18th and 19th centuries thousands were employed as seamstresses in fashion and costume-making. Some worked from home, others were employed by dressmakers, crammed together at the top of a building often working in inadequate light. Both were paid little for the intricate work and long hours.

Many costumes made by dressmaking firms like Nathan's were 'historical', made for fancy dress balls and masquerades. As historical accuracy, 'realism' and spectacular pantomimes came to dominate 19th century theatre, these firms became theatrical costumiers. 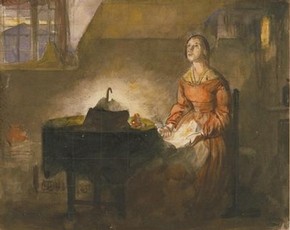 Nathan's, established in 1790, was the leading house for historical costume as well as supplying Court dress, military uniforms and fancy dress. They dressed both professional and amateur productions (Charles Dickens was a client).

Other firms specialised in pantomimes and fantastical costumes, notably Charles Alias, creator of many Principal Boy costumes in the golden age of pantomime. 'What he produced was fairy wear of film and gossamer. It shone, it gleamed and held the real fairy gold and gave the atmosphere. It was entirely suitable, yet never of this world!' (Archie Nathan, Costumes by Nathan, Newnes, London, 1960).

By the late 19th century, Nathan's were making or hiring costumes for dozens of West End and regional productions. They dressed plays for the great actor-managers, including Beerbohm Tree's extravagant productions at Her Majesty's and the Gilbert and Sullivan operas for D'Oyly Carte. They employed a large staff, including experts in historical and military dress. 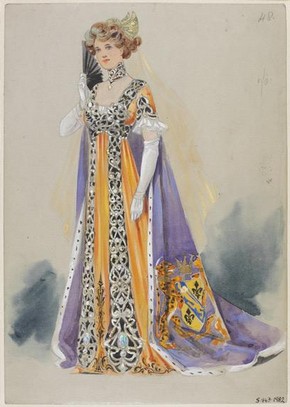 The big costume houses often had an in-house designer. From 1885 to 1934, Charles Karl at Nathan's was one of the most prolific designers of the day, adept at everything from historical epics for the great actor-managers to musical comedies.

He first studied the history and context of the production, and then created the designs around the personality and figure of each individual actor, making adjustments to fashion and history to make them look their best.

He understood actors: Fred Terry once rejected, in no uncertain terms, a whole production, demanding to see 'the proper stuff' later that afternoon. That afternoon, Karl paraded exactly the same costumes, which Terry praised extravagantly. Terry later confessed that he always manufactured a row at the final dress parade as this ensured a good first night.

Nathan's dressed thousands of plays, films and television productions, after which the costumes were hired out for productions throughout the world.

By 2000, it had absorbed the historic businesses of Alias and Willy Clarkson, before itself being taken over by Berman's and then by Morris Angel.

Once playwrights began to deal with contemporary issues in the late 19th century, London couturiers realised the potential of theatrical publicity. 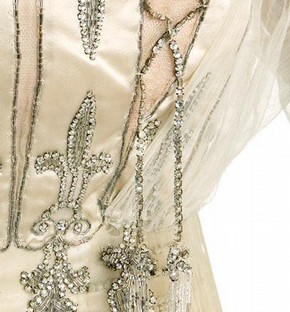 In those pre-fashion show days, designers like Worth and Lucile saw the stage as an excellent way of promoting the latest fashions and the theatres as a way of ensuring publicity for the production - sometimes more space was devoted to describing the dresses than to discussing the play.

One such dressmaker was Barolet, who dressed actress Ethel Irving for a number of productions between 1911 and 1914, including 'Witness for the Defence', 'Son and Heir' and 'Tyranny of Tears'.

The dress is purely Edwardian in its gentle blousing over the bust, slight train at the back, and interior boning. A medieval touch is suggested by the 'lacing' up the sides of the skirt, but the rhinestones in which it is executed gives it a sophistication that is very much of its time.

The fragility of the costume is enhanced by the construction of the skirt, which alternates satin strips outlined in bugle beads with chiffon.