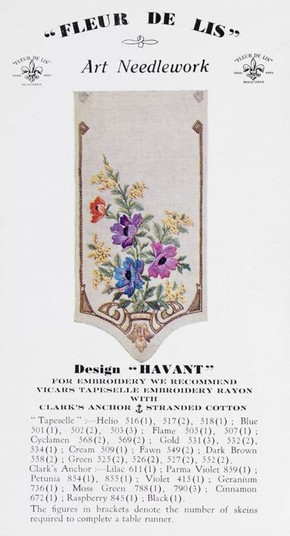 Francis Johnston’s designs and the instructions for making a table runner, decorated with anemones and mimosa, fit into the culture of home craft featured in women’s consumer magazines in the 1920s and 1930s, such as Women’s Weekly, Woman, and Modern Woman.  Fiona Hackney pointed out that literature in the last decade has accused this type of consumer craft of limiting and even undermining women’s creativity. She argued that home craft, as part of a new commercial culture of home-making in the period, provided women with opportunities for self-expression and doing things for themselves.  It was a way of displaying particular skills, such as needlework, and values, especially those of the arts and crafts movement that focussed on truth to materials and skilful craftsmanship. In addition, it showed an artistic taste that was linked to a feminine culture of modernity promoted through popular magazines. Such publications promoted dreams of an ideal home through artistic photographs of interiors and free gifts of needlework patterns and transfers for decorating furniture.

Some home editors, for example, Edith Blair at Woman concentrated on improving women’s taste in tandem with contemporary design discussions. It was, however, the business of the editors, unlike design reformers, to be conversant with their readers’ needs and hopes. Home craft features can be read as a means of coping with the difficulties and worries related to the relentless pace of modern life (unemployment, the strain of adapting to new work practices and their impact on physical and mental welfare) as well as making the dream of an ideal home, modern or otherwise, come true.

Magazine home craft mediated the modern through a feminine sense of interior decoration that made comfort, creativity, and cleanliness important in a new ideal of progressive living with a yearning for intimacy, stability, and permanence. Home craft gave women the chance to express themselves in decorating the home. This self-expression fitted into the raised profile of the female consumer with the modern woman seen as the sportswoman, the working girl, the motor car driver, the film star.

Home craft in magazines contributed to a contemporary mood of combining conservative features in modern, stream-lined rooms, for example, an embroidered table-runner on the latest furniture model. Advertisements for the Association of Homecrafts Studios that employed women to do home craft such as decorating pottery was indicative of the prevalent, if unspoken, need to earn at home, even amongst the middle classes. This included plying the needle or knitting for money. As such, home craft demonstrated a covert return to craft as a form of paid employment allowing women to stay at home whilst contributing to the family budget. In some cases it may have been a means of earning a living for those unable to do any other form of work.

In the interwar period 1918-1939, at least, magazine home craft helped the spread of handcraft and supported women in realising their ideas, values, experiences, and fantasies in unique ways. Some home editors of magazines concentrated on modernising and thus magazines helped broadcast new ideas about making and modern living in ways that helped to bridge the gap between design professionals and popular taste. Magazines with their home craft features provided a service that was not easily available otherwise to women with little leisure or money but who nevertheless hoped to create an improved, modern home. The prominence of home craft in commercial magazines which mediated a set of tastes, values and desires that put feminine concerns at the centre of modern life suggests that addressing women’s needs and hopes was as important as educating and improving their taste.