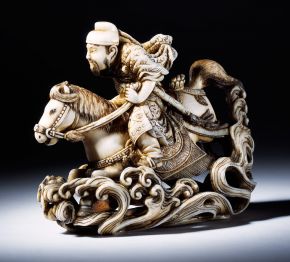 A netsuke ('root-fix) was attached to the end of a small decorative container called an inro, stopping the weight of the inro from slipping through the waist sash (obi). The cord was passed round the back of the sash, and the netsuke hooked over the edge.

Netsuke were often carved from ivory or wood, but there are examples of other materials, such as carved nuts. They were either drilled to take the inro cord or had carved channels incorporated into the design. They were made to be smooth, and not have any prominent protuberances as these would either break off or catch on the kimono. They were made in many shapes and showed a variety of subjects.

Netsuke were designed to delight those who took the time to examine their miniature detail. The figures represented are often magical or mystical beings from myths and legends, such as Raiden, god of wind, thunder and lightning; Daruma, the historical founder of Zen Buddhism who meditated for nine years; and the Shojo, a creature who lives at the bottom of the sea and is fond of drinking sake. Simple depictions of everyday objects carved in exquisite detail, such as a basket of fish, were also produced.

Explore Netsuke in Search the Collections 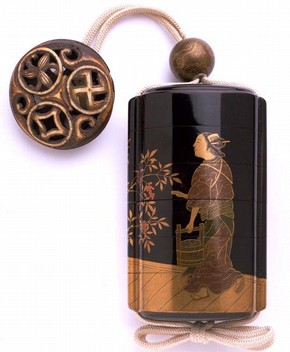 Inro ('seal-basket’) are small decorative containers that hang from the waist. They originated at the end of the sixteenth century and were worn by men to hold seals and herbal and other medicines. They were considered a particularly good way of keeping the contents sealed and fresh. By the eighteenth century they had become decorative accessories and were commissioned by the merchant class, provincial rulers and their samurai, and those that could afford them.

Inro are made from very thin leather, wood or paper covered in decorated lacquer. They consist of separate sections stacked on top of each other, and are kept together by a cord loop that passes through a channel on each side and underneath the bottom section. The sections are held together when the cord is tightened by pulling it through a bead (ojime), rather like the toggles used in outdoor clothing. The cord is then passed behind the waist sash (obi) so that the inro hangs freely from the waist. To prevent the inro from slipping through the obi, a small and often decorative toggle (netsuke) is attached to the end of the cord.

There is no fixed form of decoration. As with other objects, surfaces are decorated with a variety of subjects: figures were popular, sometimes engaged in the performing arts; monkeys, lions and oxen can also be seen; the changing seasons occur frequently.

Explore Inro in Search the Collections