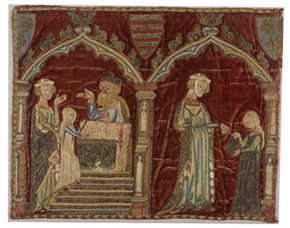 From at least the thirteenth century, England enjoyed an international reputation for its luxury embroideries, a trade that flourished in London and which exported goods to patrons across Europe. Examples of this embroidery, sometimes called ‘Opus Anglicanum’ (English Work) were owned by Kings and Queens, Popes, Cardinals and Bishops. The trade formed an international nexus, with the raw materials for the embroidery, chiefly silk threads and rich fabrics such as velvets, being imported from abroad. The designs for the work were stylistically advanced, and place English embroidery in the artistic vanguard of the period. Indeed, it has been suggested that embroideries of this type might have acted as a mechanism for the spread of English styles and compositions.

The standard reference work on this topic was published in 1938, and indeed there is currently nothing in print. The last major exhibition devoted to the subject took place in 1963. Much of the study of these works has hitherto concentrated on their place in the history of textiles and textile techniques. There is an urgent need to more fully integrate them into wider discussions of English medieval art and material culture. Furthermore, there has never been a complete census of surviving embroideries from the fifteenth century, when English embroidery began to face serious competition from imported Flemish works.

The Opus Anglicanum project has several strands. Most importantly, the team is organising a major international exhibition for Autumn 2016, the first to concentrate on this material in 50 years. The exhibition will be accompanied by a multi-author publication, which it is hoped will become the standard introduction to this fascinating topic. Secondly, there is a wider desire to produce a gazetteer of all surviving examples of this material up to the Reformation. To this end, the project has collaborated with the Princeton Index of Christian Art, which has launched a web resource on English embroideries. A collection of essays emerging from a Symposium held at the V&A in February 2013 will be published in late 2014. The team has also instituted an AHRC Collaborative Doctoral Partnership PhD Studentship to research the relationship between English embroidered vestments and their liturgical use, a collaboration between the V&A and the University of Glasgow.

The project is generously supported by The Paul Mellon Centre for Studies in British Art.