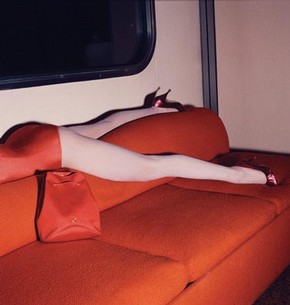 At the heart of Guy Bourdin’s fashion photographs is a confrontation with the very nature of commercial image making. While conventional fashion images make beauty and clothing their central elements, Bourdin’s photographs offer a radical alternative.

In 2003 the V&A exhibited photographs by Guy Bourdin. Guy Bourdin presented fashion as the luxurious embellishment rather than the subject of his photographs. He magnified to centre stage dark fantasies of lust, consumption and desire. The fundamental significance of his photographs lies in Bourdin’s knowledge that it is not fashion but its image that seduces and fascinates us.

Guy Bourdin was at the height of his career from the mid 1970s to the early 1980s. The first room of the exhibition concentrated on these years, when Bourdin was working predominantly for French Vogue and Charles Jourdan shoes.  As well as photographs, the display included films that Bourdin made on fashion shoots.

The photographs, slides and notebook pages that were on show in the second gallery are a record of the images that Guy Bourdin chased throughout his life. They offer an insight into the thousands of observations he made and his unrelenting capacity to shape his experiences into a visual form.

Although the print qualities, camera formats and locations change over time, the instinctive control that Bourdin exerted over his subject matter is repeatedly played out. Together, they are like his best fashion work – both brilliant and unsettling.