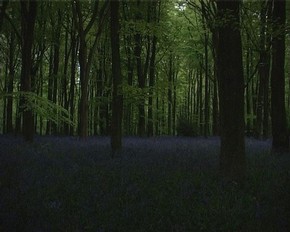 'The forest is a fascinating place, one can feel attracted to its grandeur, or scared by its depth and darkness. This space of immensity echoes our childhood memories, through fairytale or play. Walking through the forest of my childhood in France, after many years, I remembered when we used to build a hut, and slowly the light would disappear, and darkness would surround us.' Chrystel Lebas

Chrystel Lebas, born in Salon de Provence, France in 1966, shot the Abyss series in forests where twilight heralds their loss, rather than creating a theatrical abundance of light and colour. Using a panoramic camera and long exposures, Lebas observes the effects of the fading light, creating images that contain an imprint of the event as it unfolds over time.

The film Blue Hour invites us to experience the twilight in a Wiltshire bluebell wood in real time; to become aware of the barely perceptible shifts and nuances of the falling light and the sounds of the wood. Lebas has also made hour-long exposures at twilight near the border of Finland and Russia, where in winter twilight starts around 2pm.

These images are often the starting point for an investigation of childhood memories or the darker side of fairy tales. She calls her most recent work Between Dog and Wolf - a translation of the French expression for twilight that suggests its transformative and dangerous potential.

Written to accompany the exhibition Twilight.