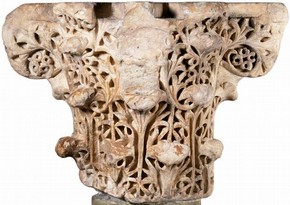 Plant motifs and patterns were used to decorate architecture and objects from the earliest Islamic period. Plants appear in many different forms in Islamic art, ranging from single motifs to extended patterns, and natural depictions of flowers to plant forms which are complicated and heavily stylised. Artists drew inspiration from different types of plants and flowers at different times.

Patterns were created using a range of techniques, including repetition of a motif within various grids, reflective and rotational symmetry, and freehand design.

Where did plant design come from?

The Islamic empire expanded rapidly from the 7th century onwards across regions in which earlier artistic traditions were established. Many of the craftsmen who made the earliest Islamic monuments and artefacts were not yet Muslims themselves, but artisans working in the service of new Islamic rulers. These earliest craftsmen continued to use techniques and semi-naturalistic motifs with which they were expertly familiar. Some scholars think that the earliest rulers did not feel the need to invent an entirely new visual language, but concentrated instead on producing large scale and luxury objects in order to highlight the power and wealth of the new empire. In effect, Islamic art inherited motifs and ways of using them from other artistic traditions that were also inspired by plants. These include the art of the Byzantine empire from the eastern Mediterranean, of Coptic Egypt, and of the (pre-Islamic) Sasanian empire of Iran as well as Roman art. For example, the vine 'scroll' is a common motif in both classical and Islamic art and contains recognisable plant forms.

Over time, Islamic art developed distinct characteristics of its own that distinguished it from the earlier artistic traditions. Detailed surface decoration on objects and buildings became popular. Plant-based design was one of the most common decorative elements, in addition to Arabic calligraphy, geometry, and to a lesser extent, figural images. The great geographical extent of the Islamic world led to a wide variety of design traditions.

Islamic designers seem to have had an endless and ingenious appetite for exploring the huge range of design possibilities offered by the natural variety in plant life. As time passed, the stylisation tended to become increasingly complicated, with ever more complex patterns derived from scrolling leaves and flowers. This element of Islamic art was admired and emulated by some European artists, particularly during the 19th century. William Morris found inspiration in the ordered patterns of Islamic art and particularly admired the magnificent Ardabil Carpet, which is the V&A's largest and most famous piece of Islamic art. 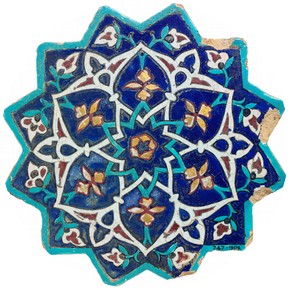 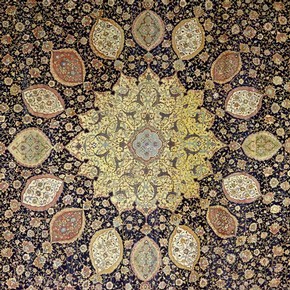 The influence of China

In the 13th century the Mongols invaded western Asia and established a Mongol court in Iran that lasted from 1258 until the 1330s. Many motifs that were common in Chinese art, such as the lotus and peony flower, began appearing in Islamic designs. These, too, became stylized, acquiring beautiful and fantastic forms unlike anything in nature.

The plant-based designs found in Ottoman ceramic and textiles are particularly distinctive, ranging from the natural to the highly stylized, In the early 15th century, Ottoman art was strongly influenced by design in contemporary Iran; using motifs of scrolling leaves and lotus and peony flowers within dense pattern systems. As well as these stylised elements, early 16th century Ottoman design favoured the 'saz leaf' - a twisting serrated leaf, which features in complex compositions on many different media. By the mid 16th century, there was also a new fashion for more natural images flowers such as tulips, carnations and roses.

In textile design, the ability of weavers to repeat a pattern efficiently may have contributed to the development of stylised plant designs in Ottoman textiles. These became increasingly formulaic. In this example the motif is just recognizable as a carnation with its lightly serrated petals, but has now been heavily stylized. This was the direct inspiration for a pattern produced by a contemporary textile design company, illustrating how modern these designs may appear to us today.

This article was written as part of the Teachers' resource: Exploring plant-based design through the Jameel Gallery of Islamic Art.