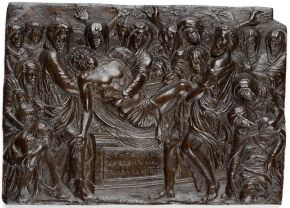 Plaquettes are small plaques made of bronze, brass, lead or precious metals. They originated in the 1440s with the desire to reproduce coins and hardstone engravings from ancient Greece and Rome. Some were made as collector's pieces, to be viewed and displayed in private, and others for practical purposes. They also inspired designs in other media, from architecture to bookbindings.

The art of plaquette making emerged in southern Germany, in Nuremberg and Augsburg, about 1510-20. The plaquettes had the same multiple purpose as their Italian predecessors. They were used mainly by goldsmiths and in bronze foundries, but also by cabinetmakers. The models were carved in wood, stone, slate and wax, then reproduced in bronze and lead.

Plaquette-making also flourished in the Netherlands in the early 16th century. Artists such as Jacques Jonghelinck, active in Antwerp, and Paulus van Vianen, a goldsmith in Utrecht, were most prolific in this field.

Explore plaquettes in Search the Collections