Poems about the V&A: 'Little song' by Deborah Tyler-Bennett 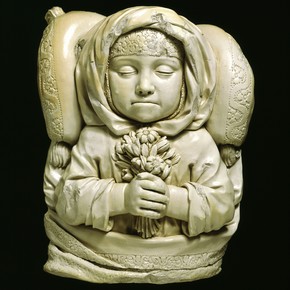 Deborah Tyler-Bennett went to Sutton Centre Comprehensive School. Her first collection was 'Clark Gable in Mansfield' (King’s England, 2003). Her second, 'Pavilion', is published by Smokestack Books (Feb 2010). 'Revudeville' is forthcoming from King’s England. Deborah also co-authored the V&A’s Creative Writing in Museums feature, and wrote this poem during that project.

Deborah was inspired to write this poem by a ceramic effigy of Lydia Dwight, who died in 1674 aged six ,by her father John Dwight, founder of the Fulham Pottery. She says:

'[I] came upon Lydia Dwight's small blue-white form after looking at many cabinets of objects. John Dwight lost Lydia, his six-year-old daughter, on 3 March 1673. He had his pottery factory in Fulham make an effigy of her dead, and another of her resurrected. I found the model of 'Lydia Dwight Dead' to be stark, oddly beautiful, and painfully, breathtakingly, honest. At the time of first seeing Lydia's effigy, I had begun work on a poem about the painter, William Hogarth, and his relationship with Thomas Coram, founder of London's Foundling Hospital. Although Lydia is a 17th-century, loved child, and therefore distinct from Coram's 18th-century foundlings, her image provides a strong reminder of what infant mortality actually meant, and her grimly set mouth, once seen, is impossible to forget ...

... Lydia Dwight, so small in size, and delicate in construction, made me immediately think of a sonnet. The poem's title 'Little Song' comes from a translation of the Italian word from which the sonnet derives (sonneto meaning 'little song' or 'little sound'). Also, the spacing out of the title and subsequent sub-titles was meant to suggest a gravestone's carved epitaph. The sonnet's fourteen lines and repetition of rhyme allowed me to place the sound of London bells in the poem, which, likewise, seemed appropriate. I also kept thinking of the form of the elegy, in particular, another poem for a dead child, John Crowe Ransom's 'Bells for John Whiteside's Daughter' (1924).'