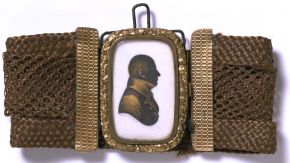 The success of the portrait miniature demonstrated the commercial possibilities of offering small portable portraits to the public.

This section looks at four other small portrait types which competed successfully with the portrait miniature; so-called 'plumbagos', drawn in graphite or ink on vellum; enamels, painted on gold or copper; silhouettes, or as they were called in Britain 'profiles'; and lastly, portraits in watercolour on paper - a quicker and cheaper method than miniature painting. 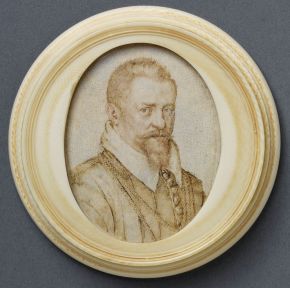 These meticulous black and white portraits are called 'plumbagos', meaning black lead, but are drawn in graphite or ink. As small portraits they competed with miniature painting.

Plumbagos developed around 1600 within the Netherlandish print trade. One of the first plumbago artists in England was David Loggan. Born in Germany of Scottish descent, Loggan had trained as an engraver in Amsterdam.

Originally plumbagos were made to be copied into print. But when drawn on vellum, which was more durable than paper, they were marketed independently. They were fashionable in England from Charles II's return from exile in 1660 until the early 18th century. 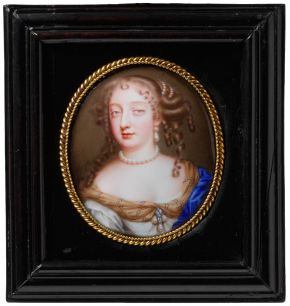 Enamels are painted on metal and fired in a kiln. Unlike miniatures they do not fade. The first enamellers in Britain were goldsmiths from abroad. Jean Petitot introduced the art at Charles I's court but returned to France around 1649. Charles Boit, a Swede, reintroduced enamels in the 1690s.

Enamels became really fashionable from the 1720s with the work of C. F. Zincke, a German artist. Some British miniaturists also offered clients enamels, but by the 1760s the fashion was passing. Jeremiah Meyer, who came from Germany in 1749 and trained with Zincke, became famous both as an enameller and a miniaturist. 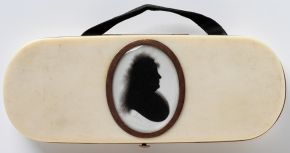 The cutting of silhouettes, or 'profiles' as they were called in Britain, was a popular pastime in the 18th century. From the 1770s professional artists began to produce profiles as a cheap, quick form of small portraiture. Sittings took no more than five minutes and endless exact copies could easily be made from the original.

But clients wanted novelty and artists needed to stand out from competitors. This soon led to elaborate variations on the simple cut profile. By the 1790s, many profiles were painted - on paper, ivory, plaster or even glass. Inevitably prices increased as the materials became more expensive. 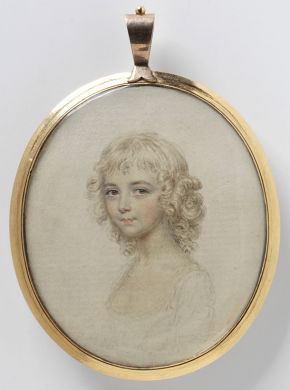 These portraits are by the two leading miniaturists of their generation: Richard Cosway and John Smart. They combine elegant graphite drawings with watercolour, and are on paper not ivory. It was easier and so quicker to work on paper, so the portraits could be larger and cheaper than true miniatures. Unfortunately the disadvantage of paper is that it discolours.

Cosway undoubtedly attracted new clients with his bold new form of portraiture. He sketched the figures freely with pencil and painted the faces with dense touches of watercolour. Smart offered clients a quicker and so cheaper version of his standard oval miniatures.