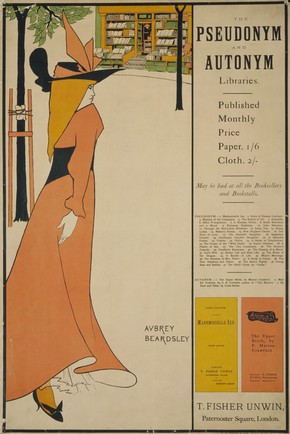 The V&A Prints collections are famous for encompassing both fine art and commercial production. It consists of about 500,000 objects, including prints from the Renaissance to the present day, printed designs for the decorative arts, topographical and portrait prints, caricatures and greeting cards, and ephemera and commercial graphics. It also contains the national collections of posters and of wallpapers. It represents all the main printmaking processes, through the prints themselves, and through its outstanding collection of printmaking tools and equipment. Major prints by international contemporary artists show current directions in printmaking - new media, new formats, and new cultural contexts.

The Prints collections include:

Key examples from the Prints collections are displayed in the Museum's galleries, while the other items can be seen in the Prints & Drawings Study Room.

The V&A sometimes buys particular prints not just because they are marvellous prints in their own right but also because they tell us about things that our visitors are interested in or throw light on other areas of the V&A collections. Six prints bought using the Julie and Robert Breckman Print Fund are cases in point. They span three centuries and many subjects but each demonstrates why prints form an integral part of the V&A’s collections.

The V&A’s splendid British Galleries opened in 2001 and the Museum is continuing to add to its historic British collections. Figure 1, The Royall Oake of Brittanyne, shows a diabolical Oliver Cromwell supervising the hacking down of a tree symbolising the British monarchy. The print will be going into a Civil War topic box available to V&A visitors in the Prints & Drawings Study Room. Topic boxes are a selection of prints and drawings on a particular theme. They can be seen in the Prints & Drawings Study Room, where works that are not on display are available to visitors. A topic box about drawing is the likely destination of lithograph in figure 2. Entitled Sketching from Nature, Tunbridge Wells, 1830, it makes fun of the early 19th-century fashion for ladies taking up drawing outdoors as a hobby. 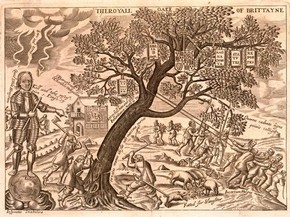 Figure 1, 'The Royall Oake of Brittayne', satirical engraving of Oliver Cromwell by unknown artist, England, about 1649. Museum no. E.217-2002 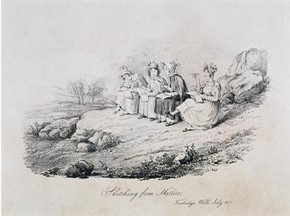 A great V&A strength is the national collection of miniatures. Figure 3 is a stipple etching called Contemplating the Picture and dates from the end of the 18th century. It shows a young woman gazing intently at a portrait miniature of a man. She sits beside a table on which are placed writing implements and a letter. Portrait miniatures were often exchanged as gifts between lovers, and this print is evidence of the part miniatures may have played in the emotional life of their owners. It is unclear from the print exactly what is going on, but the woman’s body language suggests that some event (infidelity, his illness or even death?) has disrupted their relationship.

The miniaturist Richard Cosway worked hard to establish his position as a gentleman artists. His efforts included the print in figure 4, entitled A View from Mr Cosway’s Breakfast Room with the Portrait of Mrs Cosway, 1789. It shows Cosway’s wife seated beside a window (recklessly large for the British climate) in their house in a fashionable part of London. 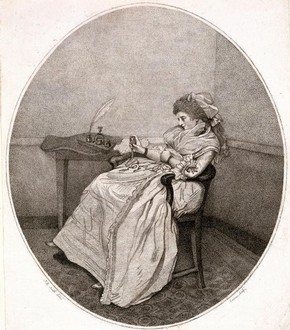 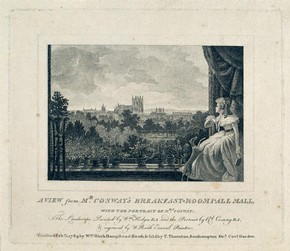 The desire to build up the V&A’s already strong architecture-related collections lay behind the purchase of the portrait etching in figure 5. It depicts the architect and builder Henry Holland (1745–1806) with a detached villa, Sloane Place, in the background. He built Sloane Place for himself as part of Hans Town, an 89-acre speculative building project in Chelsea in London.

The V&A is famous above all for its collections of the decorative arts. It includes many prints that show three-dimensional objects, including this engraving of a silver urn and stand (figure 6) designed by Rundell, Bridge & Co. and presented to James John Farquharson in 1833, in honour of his having kept a pack of foxhounds in Dorset for 27 years. 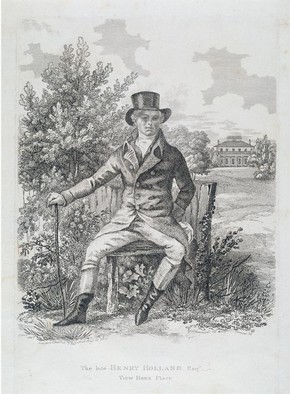 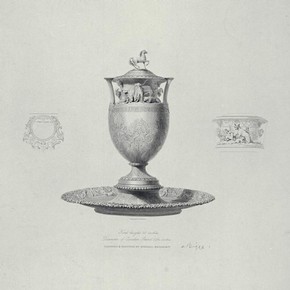