Some night in the 1580s, she snaps the last knot off with her teeth
By candle-light. One blob under the tail and she has him, in tent
Stitch: startled king from 'Icones Animalium', a beast she's never seen.
Ears, silver-pink abalone. Feet lost in a webbed pool
Of bubbles: blue muttonfat peas.  She rests him on her lap
Writing letters in her head, unsendable as words for resin
In Armenian akrolect. Her cousin knows everything she has to say
Already. It's been said.  Outside, the black unbroken forest
Rides to London. Wolves kill a roe, for cubs whose last descendent
Will be shot in Mary's realm, two hundred years down the line.
But she, in these walls, is marigold: a heliotrope,
Turning to sun that will never warm her skin again,
Ransacking old books in Spanish for emblems of hope.

Down south, the keyboard's come from Florian, in Venice.
Cousin E tries some Byrdian version of 'Only the Lonely', checks
The gilt inlay, Islamic painted whorls, the logo of falcon and sceptre.
(Her mum's. She paid extra for that.) A fretted bronze rose
For the sound-hole: an eavesdropping sun. She's awaiting her spies.
She has become her own grotesque. She can never give in.
She sends men to the tropics, men to death. When her blood says
Dance, she will gavotte the night away with the Earl of Leicester.
Are there tears for what she looks like now; for who on earth else
May show up in her bed? When melancholy strikes, they see
Her turn to a Pavane. Shadow-bones, capitate, triquetral, lunate,
Stripe and flinch in the back of her hand. One frizzed hair,
White and red, drifts down over black middle C.

And if you and I held hands across this room, touched DNA
Of their touch sloughed off on this tusker
Embroidered in velvet and lint, this Venice lacquer,
Cypress, ebony, we would join fingerprints that never met.

Painted wood spinet, known as 'The Queen Elizabeth Virginal', probably by Giovanni Baffo, Venice, Italy, about 1594, with restoration in 1961. Museum no. 19-1887 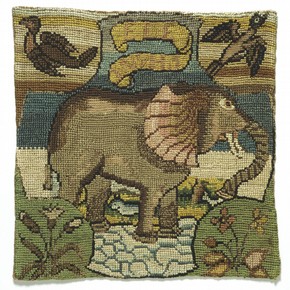 Linen canvas embroidered with gold, silver & silk, one of the 'Oxburgh Hangings', made by Mary Queen of Scots, Elizabeth, Countess of Shrewsbury & members of her household, probably at Sheffield Manor Lodge, Yorkshire, England, UK, 1570-85.

Ruth Padel has published five collections of poetry, the latest of which is 'The Soho Leopard' (Chatto & Windus, 2004) and is also well-known as a journalist. Her book '52 Ways of Looking at a Poem or How Reading Modern Poetry can Change your Life' (Chatto & Windus, 2002) is based on the 'Sunday Poem' column which she wrote for the Independent on Sunday.

In 2002 Ruth was one of five poets commissioned by the V&A and the Poetry Book Society to create new works inspired by the British Galleries 1500–1900. The poets were invited to come and explore the galleries at their leisure and select which object might take their fancy. The poems were performed in the stunning surroundings of the Norfolk House Music Room, a glittering 18th-century room in the V&A, in February 2002.

Ruth's poem was inspired by two objects in the V&A collections: a spinet which almost certainly belonged to Elizabeth I (reigned 1558–1603) and a hanging with applied panels of embroidery which was probably made by Mary, Queen of Scots (reigned 1542–67), Elizabeth, Countess of Shrewsbury and members of her household at Sheffield Castle where Mary was imprisoned.

The spinet is thought to have belonged to Elizabeth I as it bears the royal coat of arms and the falcon holding a sceptre, the private emblem of her mother, Anne Boleyn. Elizabeth is reported to have played 'excellently well … when she was solitary, to shun melancholy'. It was thought to have been made by Benedictus Florianus, but further research points to it having been made by the Venetian instrument-maker Giovanni Baffo. The panel of embroidery bears Mary's emblem of the marigold turning towards the sun (in lower right of the panel) and has been combined with various coats of arms and emblems representing courage in adversity.

Watch Ruth reading her poem in this video, recorded in the Norfolk Music Room in the V&A's British Galleries in 2002.