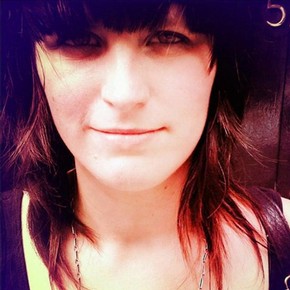 Sophie Robinson was the Poetry Artist in Residence at the V&A, January–June 2011.

Sophie Robinson was born in 1985. She studied English Literature at Royal Holloway, University of London, where she received the Phillipa K Hicks award for Creativity and Innovation in her final year. It was here her involvement in poetry began. Taught by key figures associated with the British Poetry Revival, such as Redell Olsen and Robert Hampson, she was introduced to the London avant-garde poetry scene. She first had her work published in 2005, and did her first poetry reading at the first ever Openned event, now a leading reading series, publisher and website in the London poetry scene.

In 2006 she also commenced an MA in Poetic Practice, where she furthered her involvement in the poetry world. Her MA also lead her to experiment with multimedia and cross-genre work, including short films, installations, web pieces and photography. Sophie hopes to further these explorations of cross-genre and multimedia poetry during her residency.

Since 2006 Sophie has read widely in the UK, across Europe and the US. Her work has been published in numerous anthologies including Infinite Difference: Other Poetries by UK Women Poets (Shearsman, 2010), Voice Recognition: 21 Poets for the 21st Century (Bloodaxe, 2009) and The Reality Street Book of Sonnets (Reality Street, 2008). Her blending of the lyrical and personal with more experimental writing techniques has lead Modern Poetry to describe her as a 'cross-over star' of British poetry.

Sophie's first book, a, was published by Les Figues, Los Angeles, in 2009. The book was written as an elegy to her late friend Aerin Davidson and established Robinson as a poet who sits between past and future, experimenting with and disrupting traditional form and lyrical language. Boston Review writes that the book 'wonderfully shapes the emotions of rage and grief', whilst Modern Poetry reviewed the book as 'the beautiful game of poetry played out for the highest stakes, and winning'. a was nominated for a Lambda Literary Award, and shortlisted for a Golden Crown Literary Society award.

Sophie is currently completing a practice-based PhD in Contemporary Poetry and Sexuality, also at Royal Holloway. For the last two years she has been working on a book-length work entitled SHE!, which explores the spectre of the lesbian in popular culture from the 1950s onwards, using materials from pulp fiction novels of the 50s and 60s to investigate the contemporary relevance of the queer body in society.

I see my practice as a poet being to find new forms of expression, and, consequently, to make things new through language. Whilst I draw on a wide range of traditional and avant-garde practices, my question, even when writing in a traditional and established form such as the sonnet, is always "how can I make this new?" Through my involvement in the vibrant contemporary poetry scene, and my interdisciplinary approach to making work, I want to challenge the perception of poetry as an elitist, archaic or alienating form of expression, and align it with other contemporary art practices.

I don't believe in the poet as an isolated or introspective figure, but rather I think that the poet produces her best work when she's engaging in a dialogue with the world around her. As such, my work often deals with contemporary issues, and I use vocabularies and objects taken from multiple and diverse places as materials for writing. The poetry I produce aims to both build on and break with existing traditions and as such I enjoy mixing traditional poetic techniques and registers (such as established forms and lyrical language) with experimental and contemporary practices.

Interest in the V&A Collections 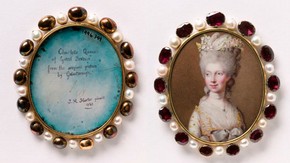 The collections held in the National Art Library have been invaluable to my practice over the last few years. The Artists' Books Collection, in particular, provides an excellent overview of the ways in which text can be published in innovative ways, and I'm interested in experimenting with forms of page and book-based text during my residency.

I'm also going to be working a lot with the Portrait Miniatures collection. I'm fascinated by portrait miniatures as historical art and craft artefacts, and am interested in further researching the history of their usage and assemblage. I also want to explore the concepts of the 'portrait' and the 'miniature', and find ways of translating these concepts into a textual practice. As Portrait Miniatures can be considered a form of 'private' art, I also want to look at the notion of the sonnet as a historically 'private' form of poetry, exploring the communication of identity from one person to another through poetry.

I'll also be using artefacts and objects housed within the V&A's collections to explore the history of queer identity in arts and crafts, looking at how the construction of gender and sexuality is contained within everyday and art objects and translating that to a contemporary textual exploration of LGBT identities. The V&A exhibition The Cult of Beauty: The Aesthetic Movement 1860-1900  will be a source of inspiration. 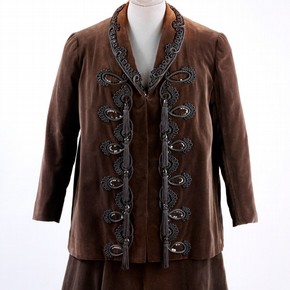 What first inspired me to write, and what continues to influence me heavily, is the avant-garde poetic canon. From the political and emotional utilization of the everyday in Frank O'Hara's work or the automatic writing of Gertrude Stein through to the contemporary practices of, for example, erasure and historical excavation in Susan Howe or the use of multiple languages to explore identity in the work of Caroline Bergvall, there's a sense of connecting praxis - how one writes - to what one is writing about. These influences have given me a sense of the scope of what is possible in poetry, and a range of approaches to writing a text.

I am also influenced by contemporary arts more generally, and see my work as having as much in common with, for example, punk rock or performance art practice, as with the work of other poets. I also see my work as situated within and commenting upon the world, and often write in response to cultural and political events. As a woman and a lesbian, my work often addresses issues of gender and sexuality, and in this I am influenced by a lesbian and feminist canon - writers, artists and philosophers such as Adrienne Rich, Kathy Acker, Cindy Sherman and Judith Butler have a great influence on the way in which I work through the politics of minority identities in my writing.

The Poetry Residency is supported by the Paul Hamlyn Foundation.