Conservation of art objects sometimes reveals the most interesting information about the object’s history. With its variety of different decoration techniques and luxurious materials, the keyboard instrument known as the Queen Elizabeth’s Virginal, which evidently belonged to the ‘Virgin Queen’, is a very interesting example of fine 16th-century Venetian craftsmanship.

The rich embellishment of the virginal includes magnificent sgraffito (scratched) ornamentation in red and blue glazes on gold, an elaborate laminated wood and parchment rosette set into the soundboard, keys inlaid with various materials, and key fronts decorated with embossed and gilded paper. 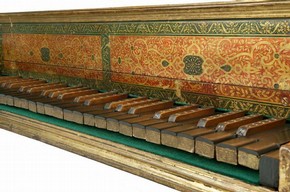 During the conservation of the Queen Elizabeth’s Virginal, a previously unknown inscription ‘1594’ was discovered above the soundboard. This tiny number – approximately 1.2 mm x 11 mm – is scratched upside down, from the player’s point of view, into the blue paint layer above the far end of the jackrail on the inside of the instrument.

The inscription is not immediately visible, and it appears to have been intentionally hidden. Compared with the overall size of the instrument, the figures are minute. The fact that the writing is the wrong way up makes it even harder to identify what at first sight appears as nothing more than meaningless scribbles. On the surface of such a complex and lively design they could easily mistaken for unintentional scratches. 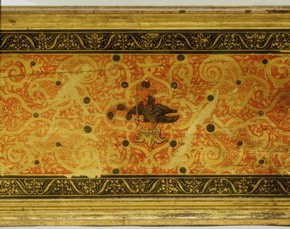 Several facts point to the number as a date linked to the application of the decoration. The spinet had been dated to about 1570 on the basis of the instrument’s method of construction and the style of its characteristic decoration.

The newly-discovered figure ‘1594’ is close to the conjectured date of creation and might therefore refer to the specific year in which the decoration on the virginal was executed.

The discovery of the inscription is very interesting in that it probably limits the time of Queen Elizabeth’s ownership to the last seven years before her death. She is said to have been an accomplished player on the virginals, but who knows whether she really still played this particular instrument so near the end of her lifetime?