'Recording Britain' collection at the V&A 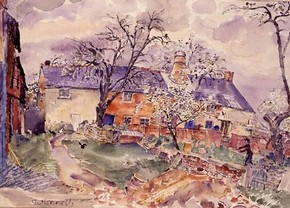 At the outbreak of the Second World War an ambitious scheme was set up to employ artists on the home front. The result was a collection of more than 1500 watercolours and drawings that make up a fascinating record of British lives and landscapes at a time of imminent change.

Recording Britain was the brainchild of Sir Kenneth Clark, who saw it as an extension of the Official War Artist scheme. By choosing watercolour painting as the medium of record, Clark hoped that the scheme would also help to preserve this characteristic English art form. With money from the Pilgrim Trust (a fund provided by American millionaire Edward Harkness) the scheme’s administrators commissioned some of the country’s finest watercolour painters, including Sir William Russell Flint, Charles Knight, Rowland Hilder and John Piper. Other younger artists – some fresh out of art school (such as Phyllis Dimond) - were invited to submit pictures and were paid a small fee for each work accepted.

Recording Britain was intended to boost national morale by celebrating the country’s natural beauty and architectural heritage, but it was also a memorial to the war effort itself. The earliest pictures show the landscapes of southern England which were under immediate threat from bomb damage and invasion; in due course the remit was expanded to include those landscapes, buildings and ways of life that were vulnerable to the destructive forces of ‘progress’ – urban expansion, housing developments, road-building and so on. As well as many scenes of traditional country life, it also shows rural industries in decline – redundant tin mines in Cornwall, slate quarrying in Wales, dilapidated windmills. One contributor, Thomas Hennell, made a speciality of depicting country craftsmen and agricultural workers. 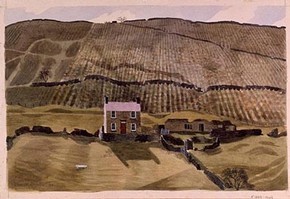 While some artists worked exclusively in their own localities – Charles Knight in Sussex for example - others travelled around the country to paint subjects selected by the Committee or suggested by local heritage groups.

Kenneth Rowntree, then living in Essex, made several watercolours of local churches, but also painted in Wales and his native Yorkshire. In Derbyshire he was asked to paint views in and around the village of Ashopton which was due to disappear under a reservoir built to supply the growing population of nearby Sheffield.

Hennell was sent at short notice to Hampshire to record the magnificent beech avenue at Lasham before it was felled to make way for an aerodrome.

The scheme employed several women, notably Barbara Jones and Enid Marx. Both were fascinated by English popular art – everything from fairgrounds and follies to topiary and inn signs – and both continued to record these 'unsophisticated arts' after the war. 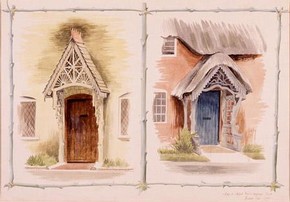 The scheme was called 'Recording Britain' but this is slightly misleading. Northern Ireland was not included and Wales was represented by fewer than 80 pictures. The surviving pictures from the 'Recording Scotland' project are in the care of the Museum Collections Unit at the University of St. Andrews. These watercolours and drawings are a uniquely fascinating record of their time. They were widely exhibited during the war years, and in 1949 the Pilgrim Trust gave them to the V&A. For many years they were on loan around the country, but in recognition of the significance of the collection as a whole, the pictures were recalled in 1990 and most can now be seen on request in the Prints and Drawings Study Room.