The British Isles and Ireland

A number of areas have their own distinctive style of knitting or a particular garment for which they are known. Traditions like these tend to survive longer in outlying districts where there is less outside influence. Additionally, knitting was sometimes the only way in which the inhabitants of poor regions were able to earn money. It was a craft that needed little equipment and a skill that could be passed down the generations and was, at times, practised by men and women alike.

Since the late 19th century, hand-knitted items of clothing like the Aran jumper have been valued for their individuality over mass-produced, machine-knitted items. Regional knitters have often adapted their craft to suit the market, for example by linking the patterns they use to ancient myths and cultures. In fact, the unique styles of regional knitting sometimes dates back no further than the start of the 20th century.

Shetland is a group of islands north of the Scottish mainland. Knitting probably came to Shetland from England, as English words were used for the earliest knitting terms. A 17th-century grave excavated in Gunnister, a moor on the islands, contained the body of a young man together with a knitted stocking, gloves, a purse and two caps. These finds are the earliest complete examples of knitting from Shetland. 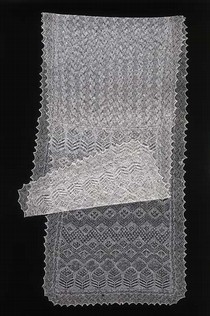 By the beginning of the 18th century the islanders were trading hosiery in exchange for money and goods from Dutch and German merchants. Knitters manufactured large quantities of coarse woollen stockings and blankets, as well as the finer work upon which their reputation rested.

Lace knitting started in the 1840s, when better transport links between the islands and mainland attracted visitors to Shetland. Aware of the local knitting skills, they brought fashionable lace articles to be copied. Unst, the most northerly island, produced a very finely spun yarn that was ideal for making the lace shawls and scarves. The intricate openwork stitches, invented by the islanders, were given picturesque names like ‘fern’, ‘horseshoe’ and ‘catspaw’.

In Shetland lace knitting the articles have no cast-on or cast-off edge, but start from a single stitch, with edges knitted on the bias. Traditionally, the shawls were passed through a wedding ring to show off their fineness and flexibility.

During the 1920s, as a response to the popularity of Fair Isle patterns from the neighbouring islands, Shetlanders returned to knitting patterned goods. However, a few lace knitters continue to ply their painstaking craft today.

Fair Isle is a remote island situated between Orkney and Shetland to the north of Scotland. Legend has it that Spaniards stranded on the island after the break up of the Armada in 1588 taught the islanders to use the colours and patterns typical of Fair Isle knitting. However, there is evidence that these design influences came from nearby Scandinavia. 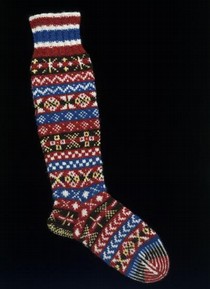 Since the 19th century the varied colours of Shetland wool have been a feature of knitting from this region. They came partly from the different breeds of sheep, but also from dyes. Madder and indigo gave red and blue, while lichens produced red, brown, orange and purple. Brightly coloured synthetic dyes, invented in the 1850s, increased the possible colour range but were used only in small quantities.

The early knitters produced stockings, caps and scarves. Sweaters in the Fair Isle style as we know it today were not produced until the First World War. There was a vogue for them during the 1920s, although natural shades like brown, grey and white were then preferred.

Fair Isle jumpers are constructed by knitting bands of horizontal motifs from two differently coloured strands of wool. The patterns are made up of motifs such as crosses, diamonds and eight-pointed stars.

Hand knitting in the Yorkshire Dales existed as a domestic industry from the end of the 16th century to the beginning of the 20th. Elsewhere in mainland Britain the rural knitting industry began to die out from the end of the 18th century, due to developments in knitting technology and the rise of factories. However, this region was a poor one and the inhabitants continued knitting to supplement occupations like farming. 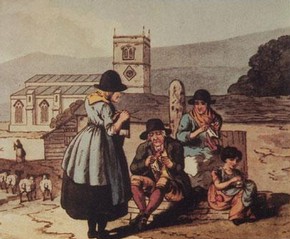 Men and women knitted as they went about their daily errands, supporting the knitting in a sheath secured to their waist. People would also gather for knitting ‘parties’. These were evening occasions where people told stories and sang, as well as continuing with their work. There were also knitting schools, which taught the skill to children from an early age, training them to sing songs to accompany their work.

The knitted goods included stockings, gloves, jackets and caps. The gloves that survive in museums are mostly made with two differently coloured strands of wool, in combinations such as dark and light undyed yarn, or black and red. The fingers are often made in the ‘midge and fly’ pattern and the palms in ‘shepherd’s plaid’. The knitter’s name and date of manufacture are often knitted into the cuff. 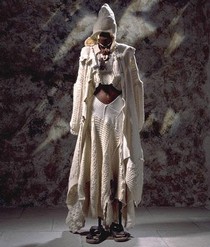 The Aran Islands are located off the west of Ireland, in Galway Bay. Contrary to popular belief, the typical cable-patterned Aran jumper is a 20th-century invention. In 1891 the government set up the Congested Districts Board to help poor families to survive unemployment and a shortage of potatoes. The Board encouraged local people to weave and knit garments to sell.

By the 20th century this cottage industry began to take off and the Board trained knitters to create complex patterns from stitches such as honeycomb, figure eight and double diamond. Instead of the dark coloured, oiled wools traditionally used to make fishermen’s jerseys, the islanders experimented with soft, thick, undyed yarn.

By the 1930s, Aran knitting was being sold to tourists from shops in cities like Dublin and it soon became known worldwide. Vogue Knitting published an Aran pattern in 1956 and the design became popular in America. Aran knitting can now be done by machine, but hand-knitted jumpers are still sought after.

Records of knitted goods bought from the Channel Islands, off the west coast of France, date back to Elizabethan times. Mary, Queen of Scots is said to have worn a pair of white Guernsey stockings for her execution. The cottage industry for making woollen stockings and waistcoats on Guernsey and Jersey thrived throughout most of the 17th and 18th centuries. The goods were exported to England, France and even further afield, and were valued for their high quality and finish. .

Revolution in France and wars in England disrupted this trade and the Channel Islands knitting industry began to decline in the 19th century. However, the islanders continued to knit clothing for themselves.

The fisherman’s ‘jersey’ or ‘guernsey’ is probably named after the fabric from which it was made. These square-shaped garments, made out of thick wool, were often knitted in the round on sets of four or five needles. Fishermen’s jumpers became popular as leisure wear in the 1880s and a fashionable version was even worn by women.

Chunky, dark-coloured woollen jumpers were a staple of fishermen’s gear all over the British Isles. Characteristics of jerseys from the Channel Islands are a decorative knotted edge, created by the knotted cast-on stitch, and a slit on either side of the welt at the bottom to give greater freedom of movement. The sides of these slits are often knitted in garter stitch. The body of the jumper is usually of plain stocking stitch.