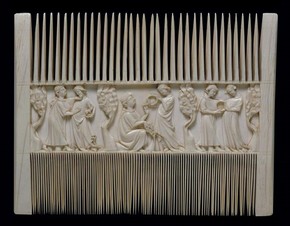 The music for O Rosa bella was written around 1400 by Johannes Ciconia, a Franco-Flemish composer, who worked mainly in Italy. The original singers were probably soloists from the court chapel or cathedral choir. In this recording the piece is performed with two male voices accompanied by a lute. This recording was made by the Royal College of Music especially for the Medieval & Renaissance Galleries thanks to an award from the Arts and Humanities Research Council.

Aie, leave me
in pain, I must end
in serving well and faithfully loving

Rescue me already
from my pining
Heart of my heart, don't leave me to suffer 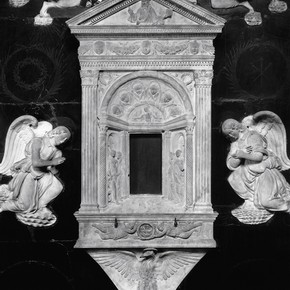 Jesu Corona Virginum was sung by an order of nuns known as the Poor Clares. The chancel chapel illustrated here was once part of one of their convent churches, Santa Chiara (St Clare) in Florence. While the Poor Clares isolated themselves from the outside world, their church was accessible to members of the public. During Mass, the people would have heard the nuns, who were hidden in an enclosed choir, singing. Although the Poor Clares took a vow of silence, their prayers were often sung during Mass and many nuns were also accomplished musicians.

This hymn is called Jesu Corona Virginum and its words praises a virgin, revelling in her spiritual marriage to Jesus and praying for her continued guidance. The hymn is dedicated to virgin martyrs, and is still sung in the Catholic Church. This recording is performed by women, as it would have been in the Santa Chiara chapel.

Jesus the Virgin's crown
conceived by her, His Mother,
as the only begotten Son,
from whom alone we accept mercy.

Thou who dwells among the lilies
And with the seven Virgin choirs
with glory decked and pledged
the rewards of a bride.

We therefore Beseech thee
To make us sensitive to
Thy grace so we may be pure
of all trace of corruption.

Praise, honour, virtue, and glory
God the father, and the Son
And also the Holy Spirit,
World without end, Amen 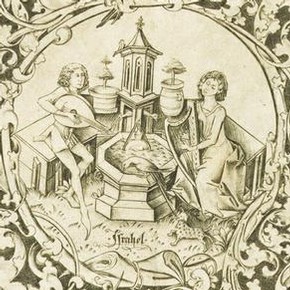 D'où vient cela, belle (How is it, my love) is one of the most famous works written by one of the greatest masters of the Renaissance chanson, Claudin de Sermisy. A chanson is a lyrical song with French words. This one is the sad lament of a jilted lover, wondering how it is that his beloved no longer wants him.

Sermisy composed for several French monarchs in the early 16th century, including François I and Henri II. His chansons were performed on a variety of instruments, but in this recording, four singers are accompanied only by a lute, a typical set-up of the time. Music like this, involving only a few performers, was probably heard in the private quarters of the palace, an intimate and exclusive experience.

How is it, my love, I beg you,
That you no longer seek my company?
I shall always be filled with sadness
Until the day you call me back and mean it;
I think you no longer need a lover,
Or that someone has slandered me to you,
Or that your heart has found a new love.

If you let love go at its pretty pace
your beauty will make a prisoner
If because of others you have forgotten me
God will give you what you deserve
but there is nothing bad in you capturing me
I wish that as much as you seem beautiful to me
As much or more be cruel to me. 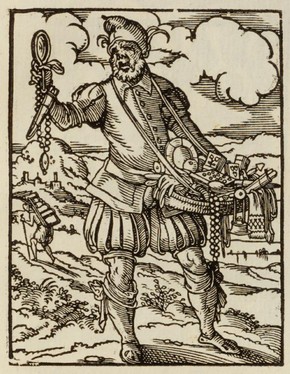 Fine Knacks for Ladies is a madrigal - a poetic song. In it the singer presents himself as a humble pedlar. In the 16th century pedlars travelled from town to town selling combs, ribbons, knives, and other small objects, the 'knacks' of the title. This pedlar sings in elegant language that reflects his status as an educated member of court circles. Through the words to the song he argues eloquently that although his wares might seem superficially precious, they're worthless compared to the honesty and loyalty of his heart.

Within the pack, pins, points, laces, and gloves
And diverse toys, fitting a country fair
But in my heart, where duty serves and loves,
Turtles and twins, courts brood, a heavenly pair.
Happy the heart that thinks, of no removes,
of no removes, of no removes. 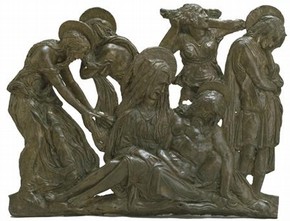 Se mai per maraviglia (If ever in wonder), was written by Franciscus Bossinensis, or Francis of Bosnia. He wrote many pieces for lute and voice, and this is one his most famous and moving compositions. The song focuses on the intense emotions surrounding the death of Jesus and focuses upon the body of Christ hanging on the cross. Many artworks made at this time also focussed on the emotional impact of Christ's death.

If ever in wonder raising your face
To the clear sky you think, o blind people
Of that true lord of paradise

Turn your eyes over here, that is presented to you
Not that form oh my not that pain
That will contemplate knots of laments
Weep for the great sorrow of the world

Weep for the bitter death and the cruel suffering
If the spirit of compassion pierces your heart
To liberate us from the ancient deception
He hangs as you see on the hard wood
And to save us from perpetual damnation. 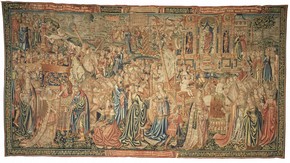 Trionfo di Bacco (The Triumph of Bacchus) was written for a Florentine festival and would have been performed in the city's crowded streets. There were three major outdoor festivals each year in Florence. The feast of the patron saint of the city, St John the Baptist, was one of the most important and is still celebrated today. Trionfo di Bacco belongs to the Trionfo genre which focused on events from ancient history and mythology. It is one of the best examples of Florentine festival music written before 1500 to have survived. Trionfo were sometimes performed whilst short dramatic scenes were presented by people on wagons that travelled throughout the streets and squares of the city.

The words for Trionfo di Bacco were written by Lorenzo de' Medici, the de-facto ruler of the Florentine Republic between 1469–92. Under Lorenzo the festivals in Florence became even more spectacular as the city's best craftsmen, artists and artisans were commissioned to make magnificent designs and costumes.

Latin was the language used for music written for the church. However songs like this one were sung in the Italian vernacular and would have been understood by all. Composers took great care to insure the proper accentuation of the text, as the words had to be heard above the commotion of an outdoor festival.

A thing of beauty is lovely youth
Whose fleeting looks fade quite away
Let those who seek, find joy today,
tomorrow brings no certain truth.

Here are Bacchus and Ariadne
Both beautiful, and one loving the other
Because time escapes and deceives
Always together they are happy

These nymphs and other people
Are light-hearted anyway
Let those who seek, find joy today,
tomorrow brings no certain truth.

These joyful little satyrs
In love with the nymphs
In the caverns and in the woods
They have in their places one hundred traps
now fired up by Bacchus
They dance and jump again.
Let those who seek, find joy today,
tomorrow brings no certain truth.

Everyone open wide their ears
Of tomorrow no one should feed
Today each one of the young and old,
female and male, should be joyful
Every sad thought should fall
Let's have a party anyway
Let those who seek, find joy today,
tomorrow brings no certain truth.

Women and young lovers,
Long live Bacchus and long live Love!
Everyone play music, dance and sing!
The heart burns with sweetness!
No toil and no pain!
That what must be, it had better be
Let those who seek, find joy today,
tomorrow brings no certain truth.