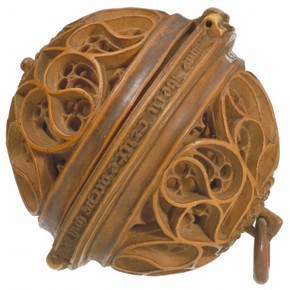 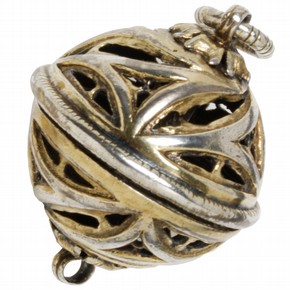 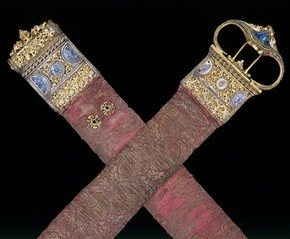 Renaissance jewellery was both decorative and functional. Rosary beads were used as memory aids for saying a series of prayers dedicated to the Virgin Mary. When not in use, they could be worn around the neck or waist. Even very religious people who shunned bodily adornment approved of rosary beads. During the Reformation, the practice fell out of favour in the Protestant countries but it remained popular among Catholics.

This rosary bead was probably from the workshop of Adam Dirksz and made in Brabant about 1510–20. The case is carved boxwood, and the interior contains tiny scenes of the life of St Jerome. Sometimes rosary beads had a pendant in the form of a pomander.

Local economies in 15th-century Italy used complex methods of credit and debit involving not only cash but also objects. A duchess might pawn her jewels or expensive clothing to help raise an army for her husband, while an artisan might make regular trips to the local pawn shop with a cloak or some napkins in order to pay off a debt or settle a bill.

Girdles were frequently used for such purposes as they were often made of precious materials such as silk and gold or silver thread. They were the one adornment that women from the poorer classes might own. To pay for the candles used at her husband's funeral, the widow of a Genoese tablecloth maker pawned a green belt with an attached silver chatelaine (a device with small hooks to attach scissors, keys and other small tools to a belt).

Girdles were also an investment. The one illustrated here, with its fine cloth of gold and its gilded and enamelled clasp, must have belonged to a wealthy woman. It would have been worn very high on the waist, swaying as the woman moved, with the long end dangling loosely to display on both sides the sumptuous reversible fabric.

Girdles were popular as gifts, especially at a betrothal, and this example may well have been such a gift. Though highly ornamental, it may also have had a protective function, to deflect evil or misfortune during childbirth. The enamelled Latin inscriptions translate as 'Strength in wine', 'Love wants' and 'Hope in God'. Pregnant women drank wine to prevent miscarriage and premature birth; 'Hope in God' is self-explanatory; and even the enigmatic 'Love wants' may be linked to childbirth.

Childbirth was dangerous, and women were often given amulets, tools and magical recipes to help them both conceive and deliver safely. The childless Margherita Datini (the wife of the Francesco Datini, also known as the Merchant of Prato) was instructed by her sister to wear a special girdle, with the inscription against her skin, to promote fertility. Sometimes a pregnant woman wore an illuminated scroll inscribed with prayers to the Virgin or to St Margaret (who was associated with safe delivery), as a girdle or wrapped around her body during labour. It may be that our girdle was used by a wealthy woman to encourage and help her during pregnancy.