Sources of information about theatre and performance

Examples of periodicals held by the Theatre collections

Theatre has only become a respectable and respected profession in the last 100 years. Before then the motivation for documenting performance was either legal, such as theatre and play licences, or personal, for example fans and enthusiasts who built up private collections.

In general with most aspects of the performing arts, there tends to be more documentation about London than the regions.

The V&A holds many special collections and archives of theatre and the performing arts, from individual performers and collectors, theatres, theatre companies and other organisations. They contain diaries, letters, manuscripts, photographs, ephemera, business papers, newspaper cuttings, designs and sketches.

The main legal records for performing arts are related to the Lord Chamberlain's office, which read, and approved, all the plays which appeared in licensed theatres. 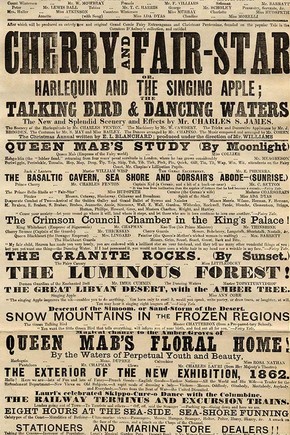 The British Library holds the Lord Chamberlain's papers, plays and daybooks which contain play-texts, readers' reports and correspondence from 1843-1968. They also hold the Modern Playscripts Collection (from 1968 to present day), the legal repository for all plays performed in a licensed space since the abolition of censorship in 1968.

Popular forms of entertainment not subject to this process such as dance, music-hall, comedy and circus can be more difficult to find. Don't be put off, there are lots of other people researching in this area who run websites and magazines that can help you. Memorabilia sites, for example, will often feature programmes and photographs.

Since the end of censorship in 1968, there has been an explosion of fringe theatre groups who perform outside conventional theatre spaces, or exist for short period of time. This adds to the challenge of researching certain productions and performers as many were not comprehensively documented. In cases like these where the 'official records' (i.e. programmes, flyers, licences etc) are absent, finding more information might mean looking through contemporary newspapers and journals, memoirs, diaries and other published works for clues.

The Theatre and Performance archives page contains more information about the archives, how to access them in person, and for direct access to selected online archive catalogues.

Other useful general sources of information available on the web can be found on the theatre and performance web links page.

How to research specific theatre and performance topics

Most people's research tends to fall into four broad areas: people, companies, productions and buildings. When researching theatre and performance you may need to be imaginative about where you look for material. There are a variety of sources that can help you to do this. Before visiting a specialist collection, gathering key information about your subject will help you to access available information more easily, such as the title, date and venue of a performance.

Researching people in the performing arts 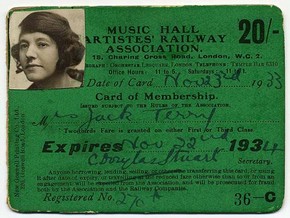 Stage careers could be very short. For women especially, the theatrical life was not compatible with the duties expected of a wife and mother, and unless an actress was very successful, or married to a fellow performer, she was usually obliged to retire on marriage. By contrast, certain branches of the performing arts, especially circus, saw large family groups travelling with a particular troupe, and many generations appearing together.

Whatever the profession of the person you are researching was, registration documents, parish records, wills and census returns are the best source of crucial information about an individual's whereabouts at a specific time. Gather as many facts as possible. If you are tracing an ancestor, talk to relatives to see what they can remember.

The playbill or programme is the most important form of theatrical record for tracing people. The V&A Theatre and Performance collections contain over half a million, dating from the early 19th onwards, and arranged according to theatre. There is a title index but no comprehensive index by individual performer. However, there are some published indexes of performers for the London stage. Unfortunately, comparable indexes to regional theatre are virtually nonexistent. 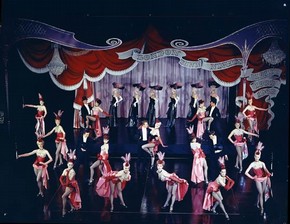 Floorshow routine for Talk of the Town, Houston Rogers, 1962

It is worth considering if the person used a stage name rather than their birth name. There is no system of registration for stage names and there is no limit to the number of different names a performer can use.

Changing names was common in music hall and variety, where a comical or catchy name could be an advantage. The music hall attracted growing numbers of speciality acts and music hall performers are the most difficult to trace.

Apart from programmes, there are very few formal records associated with the stage. For example, there is no recognised qualification and no compulsory training for actors.

The first training school opened in 1904 but there have been, and still are, many routes to a career on the stage. Since 1930 the actors' trade union British Actors Equity has registered professional actors and can confirm whether or not a person has been a member.

If you have any dates or other references to specific appearances, it can be very useful to have the name of a show they appeared in and the town where it was staged. Without some facts, the search can be difficult, especially for shows outside London. A few yellowing press cuttings or a clutch of old theatre programmes can provide valuable leads.

If you can establish that a person appeared in a specific show, you may be fortunate in finding a newspaper review which mentions them. As well as the local and national newspapers, some specialist magazines, such as The Play Pictorial (1902 - 1910) published illustrated features on current West End plays, complete with photographs, sketches or caricatures.

Whether you are interested in performers in general or are trying to trace relatives for your family history, there are many thousands of sources of information on the web relating to specific performers, which include fan or memorial sites alongside online articles and reviews.

Many theatre companies have their own website and administer their own archives making it simpler for researchers to access information about company history and artistic policy. 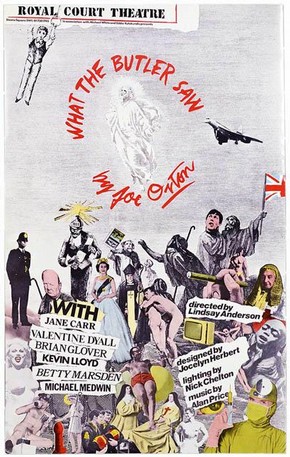 Poster for What The Butler Saw by Joe Orton, Lindsay Anderson, 1975

The V&A's Theatre and Performance Archives hold the British Performing Arts Yearbook from 1986 onwards. This annual publication lists all registered companies, including ballet, circus and puppetry.

It also holds the British Theatre Directory from 1971 onwards. Formerly the British Alternative Theatre Directory, this details all theatre and concert venues in the UK giving technical and administrative and contact numbers. It also lists all contacts for production companies, agents, producers and concert promoters, media and public relations, publishing, societies and organisations, and the suppliers and services that support the theatre and entertainment industry.

As a general rule of thumb, if a production took place in an established space, or was produced by an established company, there is a good chance of finding documentation in the archives or websites of the company or theatre.

Some useful publications for researching theatrical productions held in the Theatre And Performance Archives include: 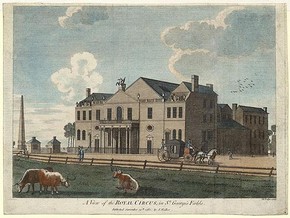 The Royal Circus at Blackfriars, 1752

As with theatre companies, if you are researching a specific theatre building and it has a website this is a good place to start as this may contain detailed information about the building's history.