Graphic artist Breno Pineschi and costume & set design artists Eric Fuly and Robson Rozza were residents at the V&A during July and August 2012 as part of the Rio Occupation London project which brought 30 groundbreaking artists from Rio to London to occupy public spaces around the city.

Breno Pineschi works with a wide range of media to create graphic works from installation, set design, motion graphics, fashion and publishing. He is Head of Creation at design firm Hardcuore, leading a team in multidisciplinary graphics. 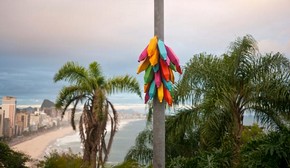 An old Brazilian Carnival song says 'Yes, nos temos Bananas' or 'Yes, we have bananas'. While at the V&A, Breno 'occupied' London with his Tropical Clusters Project, a territorial conquest of the city using an object charged with meaning: the banana. The banana became a symbol of the vibrant, magnetic Brazilian culture, representing happiness and inviting participants and audiences to admire the banana clusters which appeared across the V&A and London.

Eric Fuly is interested in visual identity, encompassing set design, costume and accessories into his work. He is experienced at working with young people through the Spectacular Art School in Rio where he leads workshops and activities for young people in the outskirt communities of Rio. 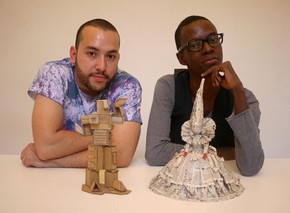 Robson Rozza is passionate about drawing, and an up-and-coming costume designer working in Rio. He is inspired by leading icons in this field including Brazilian designers Marcelo Cavalcante and Antonio Frajado.

Robson and Eric collaborated on a project at the V&A, working with visitors to create a series of Brazilian and London characters based on historical Rio and London people, both fictional and real. The characters were made in the style of Rio Carnival Puppets using found materials. Visitors to the V&A were invited to join Robson and Eric to assist in making the characters.

This Residency was part of the London 2012 Festival, a spectacular 12-week nationwide celebration bringing together leading artists from across the world with the very best from the UK to celebrate the London 2012 Olympic and Paralympic Games.