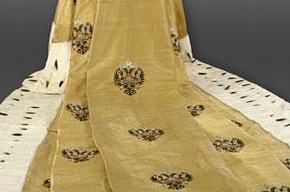 The double-headed eagle is the symbol most strongly associated with Russia. However, throughout history it has featured in many cultures around the world, including Ancient Persia, the Holy Roman Empire, the Byzantine Empire, the Venetian Republic, and Scandinavia. The first known appearance of the double-headed eagle in Russia dates to the late 15th century. Ivan III (ruled 1462-1505) made the black double-headed eagle an official emblem of the Russian state and it featured as a design motif in the regalia of the Russian Imperial Court, until the fall of monarchy in 1917. In 1992 the Russian Federation restored it to the state coat of arms. Official and personal coats of arms, stamps, coins, military flags and banners have all used the symbol.

Historians and philosophers have long wondered how this ancient symbol came to be adopted and have made various suggestions, depending on the political agenda of their day. They have always seen it as a ‘message’ from the nation’s past, as a reference to its origins and traditional values. For example, in Imperial ideology in the mid-19th century, the official view was that Russia took on the double-headed eagle because its Empire was the successor to the Roman and Byzantine Empires. According to this view, Ivan III adopted the double-headed eagle from Byzantium after his marriage to Sophia Paleologue, the daughter of the Byzantine Emperor in 1469. Modern historians and archaeologists consider this story problematic. They argue that the symbol of double-headed eagle appeared in Russia earlier and note that, in Byzantium the double-headed eagle was used as a personal or religious emblem, not as a state emblem. Alternative theories suggest that the Russian rulers adopted the symbol from the Emperors of the Holy Roman Empire, or that the double-headed eagle was introduced to Russia either as an Orthodox Christian symbol or as an ancient pagan symbol, which the Christian church later adopted. 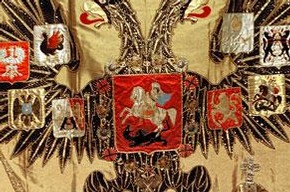 The imagery of the double-headed eagle changed often. During the 16th and 17th centuries, it was common to depict it on the state emblem supported by a lion, dragon, unicorn, and griffin. On the 19th century Russian Great State Emblem, the eagle was supported by Archangels. Usually, crowns were placed on the head of each eagle. Other symbols, such as the Russian six-pointed cross, were often added in between the heads. This custom ended in 1625, when a third crown was officially introduced on the Russian coat of arms in that position. Historians usually interpret the three crowns as a reference to the Christian concept of the Holy Trinity (God the Father, Son and Holy Spirit). Alternatively the crowns may symbolize the subjugation of the three principalities, Kazan, Astrakhan, and Siberia to Russia from the end of the 16th century. 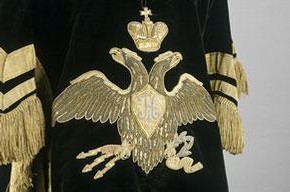 During the reign of Alexis Mikhailovitch (ruled 1645-76), the coat of arms of Moscow was placed upon the breast of the eagle. Since then it has almost always featured in the state emblem of Russia. The image of a horseman with a spear in his hand slaying the dragon is often identified with the legendary figure of St. George. In the Imperial Court regalia, for example on this 19th century embroidered golden canopy, coats of arms of other Russian principalities and lands, as well as the three subjugated kingdoms were often incorporated. The symbols of the absolute monarchy - the sceptre and the orb, were placed in the claws of the double-headed eagle.

During the 18th and early 19th centuries, they were often replaced by other combinations of objects, such as swords, laurel branches or thunderbolts. These classic symbols of war and victory clearly referred to the military strength and power of Imperial Russia. For example, on this embroidered tabard worn by a herald at the coronation of Nicholas I (1826), thunderbolts and a laurel wreath have been placed in the claws of the double-headed eagle. 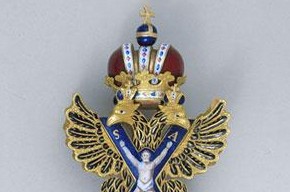 In 1699, Russia’s first Emperor, Peter I (ruled 1682-1725) established the chivalric order of St.Andrew the First-Called, the patron saint of Russia. Almost immediately, the depictions of the regalia of the order (the cross and the collar) appeared as elements of Russian state imagery. From the 19th century onwards, the chain of the order of St. Andrew officially became a compulsory element of the state emblem. On the head of the staff, carried by the herald of the Order, the cross of St. Andrew is depicted in the centre of the Russian state emblem, the double-headed eagle.

Changes in the imagery of the Russian state emblem mirrored the evolution of the political ideas and agendas, the culture of the country and its rulers. For example, the emergence and growth of the Empire were reflected in the use of crowns and the increasing numbers of coats of arms on the emblem. Foreign relationships were also revealed in the imagery of the double-headed eagle. The affiliation of Paul I with the Knights of Malta was reflected when the cross of Malta was placed on the eagle’s chest. Both Nicholas I (ruled 1825-1855) and Alexander II (ruled 1855-1881) had close ties with the Prussian court and during their reigns the eagle on the Russian coat of arms began to resemble the Prussian eagle. Victories and defeats, aggression and admiration, monarchy and religion, history and aspirations – all these are the motifs that found their symbolic expression in the Russian state Emblem under the wings of the double-headed eagle.

Alexey Unku, written to accompany the exhibition Magnificence of the Tsars.