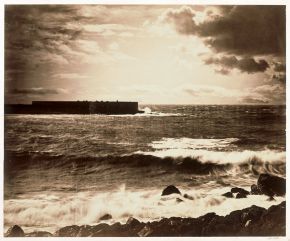 Le Gray was born in 1820 near Paris and trained there as a painter. Around 1847 he took up photography. Even before making the marine images, he became one of the most renowned pioneers of the new art. His architectural, landscape and portrait photographs, his writings, teaching and inventions were all highly influential.

However, in 1860, despite his success, he became bankrupt. Abruptly he abandoned his business and his family and left Paris for Italy. He finally settled in Egypt to become a drawing instructor, though he continued to take photographs, and died there in 1882.

The Great Wave, the most dramatic of his seascapes, combines Le Gray’s technical mastery with expressive grandeur. He took the view on the Mediterranean coast near Montpellier. At the horizon, the clouds are cut off where they meet the sea. This indicates the join between two separate negatives. The combination of two negatives allowed Le Gray to achieve tonal balance between sea and sky on the final print. It gives a more truthful sense of how the eye, rather than the camera, perceives nature.

When first shown, the luminous, shimmering effects amid Le Gray’s otherwise dark seascapes were often mistaken for moonlight. It is easy to see why this misconception arose in these monochrome images where darkness encroaches towards the edges of the scene. In fact, he achieved the moonlight effect by pointing the camera in the direction of the sun during daylight.

To a 19th-century audience a passing gleam of light reflected in the water might well have a biblical association. In 1857, after seeing one of Le Gray’s sea views, a critic for the Journal of the Photographic Society wrote:

"From the midst of this ‘pother’ of dimness falls a gush of liquid light, full and flush on the sea, where it leaves a glow of glory…It is as when Jacob’s ladder of angels was just withdrawn, and the radiance above and below, where it rested on earth and sky, had not yet melted out."

Technical virtuosity aside, Le Gray’s seascapes have great artistic power. In 1856 he wrote:

'Since its first discovery, photography has made rapid progress, especially as regards the instruments employed in its practice. It now remains for the artist to raise it to its proper position among the fine arts.'

The seascapes were, and are still, Le Gray’s greatest public, commercial and aesthetic success. He took them in France – a first set taken in Normandy in the summer of 1856 and a second set from the Mediterranean coast in spring 1857.

Shortly afterwards they were exhibited in London and Paris, to a rapturous response. One reviewer for the Journal of the Photographic Society (21 February 1857) wrote:

'We stop with astonishment before M. Le Gray’s "Sea and Sky", the most successful seizure of water and cloud yet attempted. The effect is the simplest conceivable. There is a plain, unbroken prairie of open sea, lined and rippled with myriad smiling trails of minute undulations, dark and sombrous and profoundly calm, over the dead below – smooth as a tombstone.'

It was not only their beauty that attracted high praise but also Le Gray’s technical mastery in capturing apparently instantaneous views. To arrest breaking waves was an impressive accomplishment at a period when exposures required many seconds rather than split seconds.

Most photographers found it impossible to achieve proper exposure for both landscape and sky in a single picture. This usually meant sacrificing the sky, which was then over-exposed. Le Gray’s innovation was to print some of the seascapes from two separate negatives – one exposed for the sea, the other for the sky – on a single sheet of paper.

Le Gray’s glass negatives were the same size as his photographs – about 32 x 42 cm (12 ½ x 16 ½ ins). He placed the negative directly on top of the photographic paper and printed in sunlight. The prints were then toned in a solution of gold chloride in hydrochloric acid. This resulted in a rich, violet-purple colour, with the added benefit of stabilising the images to help them withstand fading over time.

Collodion-on-glass negatives were introduced in 1851. Le Gray adopted them in preference to paper negatives to achieve maximum sharpness coupled with even faster exposure times.

The glass plate was covered with a solution of ether and guncotton (cotton steeped in nitric and sulphuric acids). It was then sensitised. The negative had to be exposed in the camera while still wet and developed immediately afterwards.

In his writing, Le Gray set out a ‘theory of sacrifices’. This suggested that in a work of art detail could be sacrificed in the interests of the overall impression of light and shade. Here he illustrates that theory using the most ethereal subject matter.

Throughout his career, and especially with his marine images, Le Gray rose to this challenge. To unite the seascapes compositionally, Le Gray created a framework of horizontal zones, with few constraining borders. Within this, he explored the potential of the subject, from empty skies and calm waters to brooding cloudscapes and turbulent waves. He enlivened the scenes with figures, jetties, beaches and seagoing vessels. With these simple notes, he composed a series of images that are breathtaking in their subtlety and symphonic grandeur.

Le Gray was not the first to photograph breaking waves. Research has unearthed the startling possibility that Le Gray may have been the publisher of some of the seascapes, not the photographer. An article in the British Journal of Photography (1 August 1864) mentions:

‘Macaire’s instantaneous photographs of the sea that were published some years ago by Le Gray which so astonished the photographic world’.

However, little is known about the photographer Cyrus Macaire to whom this article probably refers. The possibility that Le Gray acted as a publisher for other photographers is feasible. If true, the suggestion does not undermine Le Gray’s artistic judgement, high standards of printing and entrepreneurial skill. Some experts do not subscribe to the idea and opinion is currently divided.

Le Gray and the V&A

Most of the V&A’s fine group of Le Gray seascapes came to the Museum in 1868 as part of the bequest of the millionaire art collector Chauncy Hare Townshend. He had kept them in portfolios along with his watercolours, etchings and engravings. They have therefore remained in excellent condition, preserved to museum standards almost since they were made.

Three other seascapes arrived at the V&A in 2000 as part of a transfer of photographs from the British Museum where they were acquired in 1857. All of the prints have therefore remained in excellent condition, preserved to museum standards almost since they were made.

This text was originally written to accompany the exhibition Sea and Sky: Photographs by Gustave Le Gray 1856-1857 on display at the V&A South Kensington between 8 May and 3 August 2003.