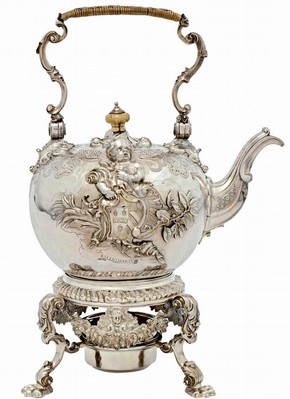 Paul de Lamerie (1688–1751) was the greatest silversmith working in England in the 18th century. A Huguenot, or French Protestant, he came to London as a small child with his parents, fleeing persecution in France.

His success lay in his exceptional powers of invention and creation, but also in his ability as a businessman, retailing some astonishingly spectacular silverware from his own workshop and also using the best external suppliers in the trade.

The V&A has an outstanding collection of silver by de Lamerie and his contemporaries. You can download and print the trail below and bring it with you when you visit the V&A to help you find the highlights of the de Lamerie permanent collection across the galleries.

Centrepieces sometimes comprise several separate objects, designed to be seen together along a table, often including functional items such as tureens containing ragouts (spicy stew).

By the 1750s, this composite centrepiece had developed into the now more familiar dessert centrepiece, which became the grandest single item of dining silver, often with hanging baskets and placed in the centre of the table for formal meals. As here, some were very elaborate and could serve as a fruit stand, set out at the beginning of the meal and supplemented by further dishes of fruits and sweetmeats for the dessert course. 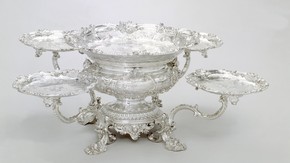 Sweetmeats, long known in the Middle East and Asia and to the ancient Egyptians, were at first preserved or candied fruits, probably made with honey. Subsequently, dessert foods from custards to candied violets were referred to as sweetmeats. Wet varieties were eaten with a spoon and included jellies, creams, floating islands and preserved fruits in heavy syrups. Dry varieties, for which this centrepiece could have been used, included nuts, fruit peels, glacéed fruit, sugared comfits and flowers, chocolates and small cakes.

This elaborate centrepiece, a wedding present, is richly decorated with characteristic Rococo motifs - bold scrollwork, flowers and shells - but also contains elements typical of de Lamerie's work, such as the helmetted putti.

Purchased with assistance from the National Art Collections Fund and others 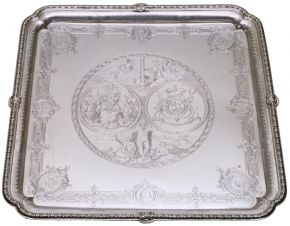 This square tray or 'salver' is one of two commissioned by Sir Robert Walpole to commemorate his terms as Chancellor of the Exchequer. It was a long established custom for the holders of certain Crown offices to receive as a perquisite ('perk') the official silver seal of their office when it became redundant, as, for example, after the death of a sovereign. The recipient then commissioned a piece, made from the melted down silver, and had it engraved with the designs of the official seals.

Sir Robert Walpole was Chancellor of the Exchequer when George I died in 1727 and this salver is engraved with the design of the Second Exchequer Seal of George I. The salver was eventually inherited by Sir Robert's youngest son, Horace, politician, writer and architectural innovator.

The superb engraving, of the highest quality, is attributed to William Hogarth. The seal roundels are supported by a figure of Hercules, representing Heroic Virtue, flanked by allegorical figures representing Calumny and Envy, with a view of the City of London in the background. The figures above represent Prudence and Fortitude. The border is of elaborate strapwork between masks representing the Four Seasons and cartouches in each corner. These show, within the Garter collar, the double cipher (initials intertwined) 'RW' twice; the arms of Walpole quartering those of his wife Catherine Shorter; and the Walpole crest of a Saracen's head.

Purchased with assistance from the National Art Collections Fund and others. 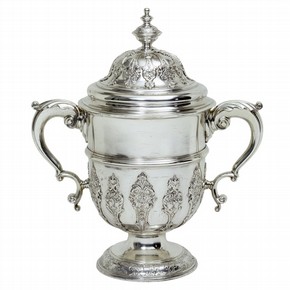 In the 18th century the two-handled cup developed into a ceremonial object, rather than a functional one. Covered cups were the ideal grand gift, and became a popular choice of prize for sports. In particular, they were presented to and used by male societies, such as colleges or trade and craft associations. As a result of their status as heirlooms, a disproportionately large number of cups has survived, compared to other categories of silver plate.

Here, the inverted bell shape is typical of cups of 1720s-80s. The elaborate cast mouldings reveal how de Lamerie, like many London goldsmiths, was moving away from the simpler decoration favoured by earlier generations to the much more ornate Rococo style which became popular in London during the 1730s. 'Rococo' comes from the French word 'rocaille' - the rock and broken shell motifs which formed part of Rococo design. 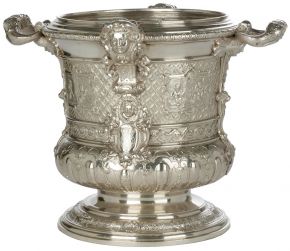 'Ice-Pailes', designed to hold a single bottle of wine and prominently displayed in a dining room, were a novelty introduced to England from the court of Louis XIV around 1700. The Jewel House of George II supplied this costly example (one of a pair, the other now in the Royal Museum of Scotland) as part of the ambassadorial silver for Phillip Dormer Stanhope, 4th Earl of Chesterfield when he was appointed English ambassador to The Hague in 1728. When he arrived he added a 50-foot dining room to the ambassadorial residence for entertaining.

Chesterfield was a great connoisseur and enthusiast for French culture and the design of this cooler was based on Paris-made silver of 1710–20. The cast dolphin handles and the four panels chased with the Elements (Fire, Air, Earth and Water) are found on drawings of silver made for the French court. Perhaps Crespin, known for the French character of his silver, supplied the pair to Paul de Lamerie as a subcontractor.

The Jewel House held some second-hand French silver, used as  models by the London suppliers. Chesterfield's issue also included candlesticks made by Elie Pacot of Lille as well as exact copies with Paul Crespin's mark.

Purchased with assistance from the National Heritage Memorial Fund, National Art Collections Fund and others.

Other objects by Paul de Lamerie in the collections