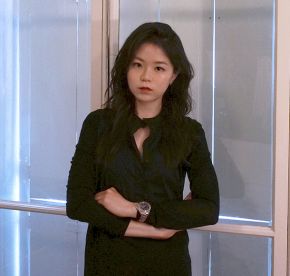 Yiyun Kang was born in Seoul, Korea. She holds a Bachelor in Fine Arts from Seoul National University’s Painting department and a Master in Fine Arts from UCLA’s Design & Media Arts department. Upon completion of her MFA in the United States, Kang worked and taught in Korea for 3 years, subsequently moving to London, where she is currently working and pursuing a PhD at the Royal College of Art.

Kang is internationally recognized for her projection mapping installations. Her work has been exhibited in a number of museums and galleries in Europe, Asia and the United States and she has taken part in several residency programmes, including that of Korea’s National Museum of Contemporary Art. Her work has been shown at Seoul Museum of Art, Taipei Museum of Contemporary Art and the Venice Architecture Biennale 2014. Kang has received several awards and has been commissioned to create work by various institutions and foundations.

Rather than focusing on the making of objects, Kang’s work explores the cultivation of relational environments through spatial projection mapping installations. These works investigate opposing values such as reality and virtuality, materiality and immateriality, object and non-object, exploring the overlapping area between those extremes. Kang’s works do not really belong anywhere between these conflicting values; instead, her work attempts to generate mixed-reality environments, engendering perceptual ambiguity and leading the audience to reflect on this dichotomy. As the centripetal force that precipitates this mixed condition, digital media provide the vehicle for her exploring this in-betweenness.

My recent fascination has been to create dynamic environments without producing physical objects—a paradoxical goal that can be realized through projection mapping. In this residency, I will carry out my creative practice, using projection mapping to reinterpret a particular V&A collection: the Cast Courts (room 46A). The overarching concept that informs this project is the idea of ‘bridging the gap’. Building on my work’s exploration of the overlapping zone between opposing values, during my residency I will attempt to bridge the gap between old and new—not by setting up a hierarchical relationship, but by revisiting the Cast Courts through digital language. 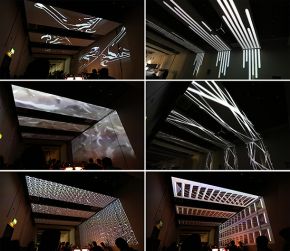 In order to do this, I will map the architectural objects in the Cast Courts by means of digital projection. There are two reasons for choosing the architectural casts as my inspiration, the first of which follows from the twofold meaning of the Cast Courts. Each cast is simultaneously an object and an environment. Unlike sculpture, the architectural casts belonged at one time to a specific place. Detached from their original site, the casts are now rooted in a new context at the V&A. I was attracted to this dual identity as a contextual object-site. A second reason is that the Cast Courts’ collections are not originals, but reproductions. This issue of copy versus original is significant in digital media, given that the notion of originality does not strictly exist in the digital realm. However, projection mapping entails a somewhat different ontology; despite its digital nature, it exists only when incorporated with its environment. When the unique ontologies of projection mapping and the Cast Courts come together, the results should be inspiring.

My practice will not only reinterpret the notion of reproduction but will also reinvigorate the contextual meaning of the cast by formulating it as an active environment rather than an object, through which the audience can navigate.

My second approach for this residency is an ongoing research project to develop a practical mode of documentation to resolve archiving problems for immaterial digital work. This has become an increasing concern not only for practitioners but also for institutions facing the problems of a ‘digital dark age’ because of obsolete technology. Since my work with projection mapping installations is mostly site-conditioned, it is almost impossible to preserve in its original form after an exhibition. In summary, this research project is a quest to develop optimal methods for documenting experience-based digital art.

The proposed subject of my research project is the V&A’s Computer Art Society (CAS) collection and the three-dimensional models, blueprints, and drawings from the Architecture and Theatre/Performance sections. Through this residency, I will investigate not only a digital version of archiving, but also a physical method of documenting digital art. In this respect, the Architecture and Theatre/Performance sections’ diverse methods are optimal resources. The CAS collection provides another point of reference for the research project. As I understand, the V&A’s CAS collection includes significant holdings of early computer art such as plotter prints and graphic works. By examining how the V&A conserves these early digital art forms, I hope to expand my own knowledge of documentation practices, and to reach findings that can also be of use to the V&A.

Visit Yiyun in her studio to find out more about her creative practice, her work in progress and her residency at the Museum.