Take the cover off the pen and press the power button (the button with the red symbol on it) to turn the pen on.

When the screen says 'Ready to Scan' place the pen at the beginning of the words that you want to hear and, pressing firmly so that the red light comes on, roll the tip of the pen to the end of the words. 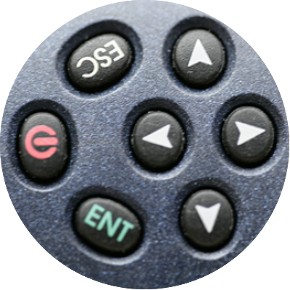 Press the ← button once. The sentence will be spoken out, highlighting each word as it's spoken.

Press the → button to move along the sentence word by word. Each word is spoken out.

Press the enter button (button with green coloured ENT) to see the word in large print.

Press the → button to hear the word spelled out.

Press the ↓ button to see the meaning of the word.
Press enter and ↑ ↓ → ← buttons to hear each word of the meaning.

If you want to scan more words press the escape button (ESC) until the screen says 'Ready to Scan'.