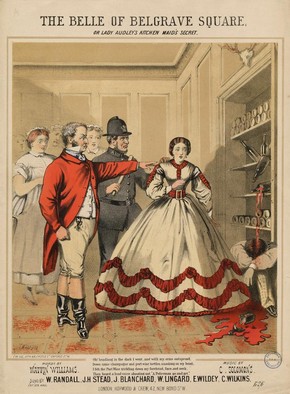 The ability to mass produce music covers owes a lot to the invention of lithography. Lithographs were produced using wax or crayons to draw the designs on a specially prepared flat stone which was then inked. The earliest music sheets to be illustrated by lithography were produced in this country in about 1820 and were coloured by hand. After colour lithography took off in the late 1830s, coloured illustrations could be produced cheaply in large numbers.

Several artists specialised in music cover illustration and the individual style of the artists can often be recognised from the design and date.

Maxim Gauci, nicknamed 'the father of all music hall artists', he produced many of the early engraved and hand-coloured sheets. He died in 1854.

John Brandard illustrated waltzes and polkas and other dances for the conductor Louis Jullien from 1844. Brandard’s illustration were beautifully done, with delicate colouring and were always printed on good paper.

Alfred Concanen, famous for his witty representations of London life, is considered the most prolific of the music sheet artists. He was also was a book illustrator and regularly did line drawings for the Illustrated Sporting and Dramatic News in the 1870s.

H.G. Banks worked with Concanen and was probably influenced by his style. He often used roundels and vignettes on his covers to illustrate several verses of a song. From 1877 he produced covers for publishers Francis Day and Hunter and was working at a time when the quality of sheets was in decline.

It has been possible to buy the lyrics for your favourite songs since the invention of the letterpress in the 15th century when ballad sheets and engraved music were first printed. But it was not until the Victorian era that demand for illustrated music sheets reached the height of popularity.

The invention of the upright piano in 1827 meant that even modest-sized houses (who could afford it) had room for a piano. The piano became one of the main forms of home entertainment long before the era of television and sound systems. In the 1840s sheets of music and songs from popular plays and quadrilles, polkas, mazurkas and waltzes were firm family favourites.

Victorian sheet music covered a huge range of themes. Songs and music from popular plays were often published. Because recordings were not available, buying the music sheets was the only way to play the music at home. The American actress Adah Isaacs Menken made the equestrian drama Mazeppa popular in 1864. The musical Babil and Bijou, written by pantomime and burlesque writer Planché, was a success at Covent Garden Theatre in 1872.

Topical events were also often marked with a song, for example the closure of the Crystal Palace in 1852. The Polo Lancers celebrated the new sport of polo. Romance, love and marriage were all popular subjects for songs.

Music sheet covers could also be satirical and were often about topical events, fashions or political ideas, from London life to the wearing of bloomers or the Co-operative movement.

It was the music hall that created the popular market for illustrated sheet music. Stars such as George Leybourne, Arthur Lloyd and other ‘swells’ were idolised like pop stars and the words and music of their songs were much in demand. In the 1870s, a popular song could sell 80,000 music sheet copies.

By 1888 there were nearly one hundred music shops in London. The publishing of illustrated music sheets had become a very lucrative business with relatively low overheads. The lyricist and composer might get just £5 per song, but since publishers realised that a good cover illustration could sell thousands of copies, the artists could receive as much as £20. There were no copyright regulations until 1882 and music was often adapted or pirated without any fee to the original composer or lyricist.

By the 1890s publishers began to reproduce photographs of singers and stars on the front of music sheets. This new technology heralded the decline of the illustrated music sheet. They were slowly replaced by those featuring a photographic image surrounded by a selection of novel letterforms.