Silver Service Slavery: The Black Presence in the White Home

Silver Service Slavery: The Black Presence in the White Home 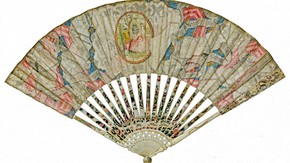 Direct representations of the transatlantic slave trade are rare in museum collections. Less so are representations of black domestic servants, a subject which proliferates in the art and design of the mid to late 18th century. Images of black servants can be found on prints, textiles and ceramics of the period and provide rare visual evidence of the black British presence. However, the servant is often depicted as a marginal and isolated figure who is included merely to reflect the wealth and fashionable tastes of their 'owner'. This article reflects on these difficult images, with reference to items held within the collections of the Victoria and Albert  Museum. 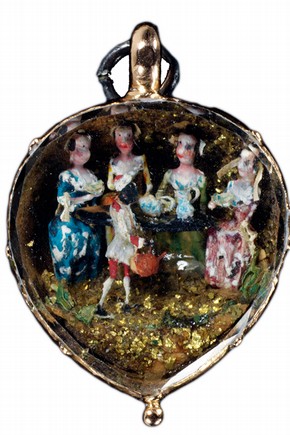 Pendant, England, about 1750, gold set with enamel. Museum no. M.33-1960. Vignette depticts a tea party with a young black servant in attendance.

Black people have been present in Britain since its early history. A troop stationed at Hadrian's Wall in the third century AD was reported to include black soldiers and, in medieval times, black musicians were a common feature of Britain's courts. In the 18th century Britain's increasing mastery of transatlantic trade, particularly its dominant role in the trade in enslaved Africans, brought about a significant increase in its black population. By 1770 this population is estimated to have numbered around 15,000 people, based largely in London and around ports involved in transatlantic trade such as Bristol and Liverpool.

Black Britons worked in a variety of professions; as sailors, shopkeepers, artisans, labourers, peddlers and street musicians, amongst others. The biggest employment sector for both white and black populations was domestic service and a large number of black people worked as servants, butlers, valets and other domestic helps. Unlike their white counterparts it is probable that black domestic workers were largely unpaid and unable to voluntarily leave their employer. The social and legal position of black people in Britain remained precarious throughout the 18th century and, as Norma Myers has noted, 'as late as 1785 black people continued to be regarded and indeed, treated as property'. 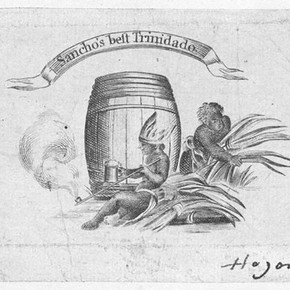 Some Africans were able to resist the anonymity and oppression of domestic service and attain a profile for themselves. Examples include Francis Barber (ca. 1735-1801), the Jamaican-born valet, secretary and later heir of Samuel Johnson, also Ignatius Sancho (1729-1780), born on a ship transporting slaves from Africa to the West Indies, butler to the Montagu family, later owner of a Westminster grocery shop and best-selling author of a collection of letters, published in 1782. The records of other African lives marked by slavery have been lost to us but are likely to be as varied as a racist society permitted.

Despite the diversity of black people in Britain and the occupations they held, in the visual culture of the period they appear most frequently in the role of domestic servant. The black servant is typically depicted as a boy or young man wearing a form of orientalised dress (or, at the very least, a feathered turban) in an affluent urban domestic environment. He is rarely pictured at the centre of the scene, which is usually dominated by white subjects, but is generally positioned at its margins. He is often associated with new commodities made available through transatlantic trade, such as tobacco, coffee, chocolate or tea (drunk with sugar from West Indies plantations). 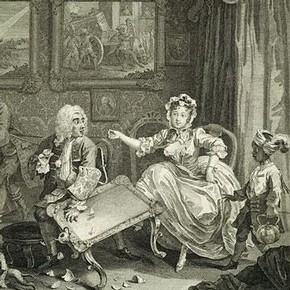 The artist William Hogarth (1697-1764) often included black subjects in his satirical images of 18th-century life. Plate II from his popular 1932 series 'A Harlot's Progress' includes the figure of a black child servant. The series tells the story of Mary (or Moll) Hackabout, a simple country girl who arrives in London, seeking work, presumably as a servant. Instead she is drawn into prostitution, is arrested and eventually dies of syphilis. In this image Moll is surprised with her lover by her wealthy master. She attempts to cause a distraction by knocking over a table of tea things, enabling her lover to escape. The young black servant, in feathered turban, kettle in one hand, goggles at the scene.

It has been suggested that the figure of the servant reflects Hogarth's beliefs about the 'destabilising' influence of transatlantic trade. The presence of the servant, the monkey and the mahogany table of tea things all suggest a colonial source for the merchant's wealth. The dehumanising silver 'slave collar' that the servant wears suggests that Moll too has become a slave, not only to her merchant master but also to luxury and fashion. A culture of exploitation, Hogarth seems to suggest, underpins this picture of fashionable living. 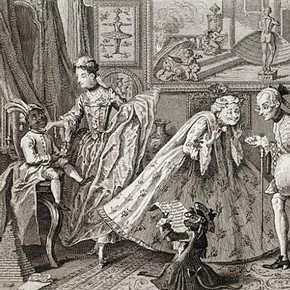 This relationship between commodities and enslavement is repeated in another print by Hogarth. 'Taste in High Life'  viciously satirises the clothes and behaviour of fashionable society in the early 1740s. The figures depicted wear ludicrously debilitating dress, emphasising their physical enslavement to fashion. The central female figure wears an excessively large hooped skirt, her companion displays a huge fur muff and long pigtail and the black boy servant, again in feathered turban, is dressed in a coat with tails so long he would surely be prevented from walking. Pictures on the wall behind show further punishing devices for creating a fashionable figure. The room is full of collectibles and whilst the couple admire a miniature teacup and saucer, a third woman admires the seated black child as if he too were a decorative art object. The position of her hand, which is touching his chin, suggests the unsettling intimacy to which a domestic servant might be subjected.

Both prints by Hogarth associate the black child servant with the ritual of tea-taking. In Moll's parlour the upset table causes an expensive tea service to crash to the ground and 'Taste in High Life' makes a visual analogy between the admired teacup and saucer and the black child. Tea and ceramic tea services from China became available in England in the late 17th century but it was during the 18th that the popularity of tea-taking became established, initially amongst the affluent and then, by the end of the century, by the population at large. Chinese tea was accompanied by West Indies sugar and it is possibly the spectre of the slave labour which lay behind its production which caused the black servant to be included in popular representations of tea-taking.

As the popularity of tea-taking grew so too did the demand for tea utensils and ceramic manufacturers were quick to respond to the new market. The new technique of transfer printing enabled high quality images to be printed onto ceramics and reproduced in quantity, saving time and making porcelain available to a wider range of people. The technique was most extensively used at the Worcester Porcelain Factory, particularly by the engraver Robert Hancock (1730-1817). 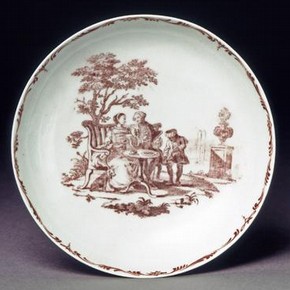 The most popular of all on-glaze transfer-printed designs was one by Hancock known as 'The Tea Party', which, in its most common version includes a black child servant. This image was reproduced on a multitude of ceramic objects - tea canisters, cups, plates, sugar bowls, snuff boxes - and was widely copied by other manufacturers. The design depicts a fashionable and well-dressed couple sitting on a high-backed settee in a garden setting with a table of tea things in front of them. To one side of the settee a turbaned black boy servant bows slightly as he pours water from a kettle into a teapot. On the other the composition is balanced by the figure of a seated dog.

Engravers drew inspiration from a wide range of sources and it is not clear where Hancock found this image, although it is in the French style. Hogarth may well have been a source for the figure of the black servant for he, like Moll's, carries a kettle and is dressed in a similar fashion, down to the tassel which hangs down his back. Hogarth's influence is most apparent in a design associated with the Tea Party. 'The Maid and Page'  was used to decorate the opposite sides of bowls and pots and the page has been directly lifted from Moll's parlour. His expression of shock remains unchanged despite the new scene - a maid arranging a tea table out of doors - which should give no cause for alarm. 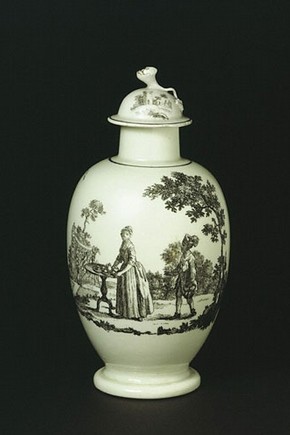 William Hogarth and Robert Hancock ensured that images of black servants entered a much wider spectrum of British homes than could actually have afforded to employ such individuals. They also cemented the visual relationship between the figure of the black child servant and scenes of tea-taking. It is perhaps no coincidence that the later part of the 18th century - the period in which these images proliferate - was witness to increasing debate about Britain's use of slave labour. The tea table became a focal point in this debate, a fact borne out by the publication of William Cowper's poem 'The Negro's Complaint' in 1788, 'which his abolitionist friends in London 'ordered … on the finest hot-pressed paper, and folded it up in a small and neat form, [and] gave it the printed title of "A Subject for Conversation at the Tea-table"' (Gerzina, 1995, pp. 186-7) also in abolitionist campaigns to boycott West Indies sugar.

The image of the black servant has endured. In particular it has caught the imagination of artists of our period. A drawing by Lubaina Himid (1954-) in the V&A's collections reveals both the influence of the image of the black child servant and of the work of William Hogarth. The drawing was made in preparation for a 1986 installation entitled 'A Fashionable Marriage', which took a scene from the Hogarth's 'Marriage A-la-Mode' and reproduced it as a group of freestanding plywood figures. The scene, which pictures a countess enjoying the attentions of her lover and a group of hangers-on, includes two black servants; a turbaned kneeling child and a young man serving hot chocolate. In the original scene they are marginal figures, both literally (they are depicted on the margins of the social circle and of the picture) and figuratively (they are black and members of the servant class). However, in Himid's installation they become the central characters. In the preparatory drawing the boy appears as a young man, still in orientalist dress, but now kneeling next to a globe and a pile of 'war toys', including batons, helmets and guns. He points to the top of a rocket which he has defused by breaking off the tip. In contrast to Hogarth's apparently subordinate boy servant, this African man is explicitly insubordinate and world security is held within his palms.

Clearly, the figure of the black servant was a product of its time. Formed under the conditions of slavery it presents black Africans as infantilised and servile figures. Historical evidence, which includes accounts of the lives of black individuals such as Barber and Sancho, challenges the racist assumptions behind this much-reproduced image. Moreover, work by contemporary black British artists such as Lubaina Himid, continues to find new ways to excavate stories of agency and resistance from this imperially-informed genre.