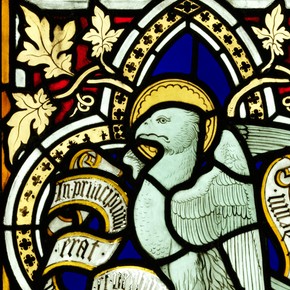 The Eagle of St John, stained Glass Panel, signed by Thomas Willement, 1845. Museum no.C.151-1980, given by Holy Trinity Church, Carlisle, UK. This panel comes from a window with scenes from the life of Christ supported by the symbols of the four Evangelists. Each bears a scroll with a Latin text from the Old Testament. This one, which translates as 'Thou shalt not suffer thine holy body to see corruption', refers to the Resurrection of Christ.

The 19th century in Europe opened with a widespread interest in the religious art of the medieval church. Artists and scientists worked together to revive the techniques of medieval glass production and decoration. Once again many churches were filled with large and colourful story-telling windows. This development was part of what is known as the 'Gothic Revival'.

The revived medieval techniques that are most characteristic of this period are the use of pot-metal glass along with lead lines to form the main design.

Pot-metal, glass coloured all the way through, had not been in much use since the late 16th century. Attempts to re-create this type of coloured glass, first at the end of the 18th century and then in the 19th century, were carried out in the glass making centres. Eventually the properties of this glass were understood and 'antique' glass, made in the medieval manner, was avidly used by artists working in the Gothic Revival style.

Through long study of surviving medieval glass windows, artists also began to appreciate again the beauty of composing a design with little pieces of coloured glass joined together by thin strips of lead.

Thomas Willement was one of the first Gothic Revival artists to embrace the new developments in stained glass design and production. In this panel he used pot-metal glass and lead lines to outline the design, instead of simply painting onto clear glass with enamel paints, which was the 18th-century practice.