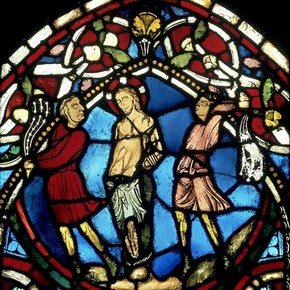 'The Flagellation of Christ', stained glass panel, France or England, about 1200–1220. Clear, coloured and flashed glass, with paint. Museum no. 5460-1858. Judging by its subject matter and shape, the panel formed the upper section of a tall narrow window devoted to part of the Passion of Christ (the Crucifixion and the events leading up to it). Its original location is unknown.

The earliest stained glass panels in the V&A date from about 1140-1144. Although a few earlier examples exist elsewhere, it was only after the mid 12th century that figurative stained glass was widely used throughout Europe.

This panel is made up of small, irregularly shaped pieces of coloured glass. The glass is coloured by adding metallic oxides to the molten glass. This type of glass is known as 'pot metal'.

The coloured glass is then cut to shape, following a 'cartoon' or pattern, and the pieces are held in place by strips of lead. Details such as eyes and folds in the drapery are painted on with a fine brush. The paint is a simple pigment composed of iron or copper filings and a ground glass compound.

If you look in the border, you can see streaks in the red glass where the white is showing through. This indicates that the glass is 'flashed'. Red pot-metal glass is so dense that little light can pass through. To overcome this problem, the glassmaker would 'flash' thin layers of red glass over a thicker piece of clear glass. The red was sometimes uneven, or it could be scratched through to reveal the clear glass below.

We do not know the origins of this panel, but it must have formed part of a window that was devoted to the story of the Passion of Jesus Christ, a popular subject for narrative window cycles. The shape of the top shows that it would have been located at the top of a pointed window, known as a 'lancet'.

The style of the painting and the forms of the figures are similar to other works in glass in England, such as at Canterbury Cathedral. However, there are also similarities with works in France, so we cannot narrow down its country of origin.

The 'Passion' is the story of Christ's suffering and death beginning with his arrest on Holy Thursday and ending with his burial ('entombment') on Good Friday evening. When Christ was brought before the Roman governor in Jerusalem, Pontius Pilate, he was questioned and then condemned to death. He was tied to a post and whipped ('flagellated'). This was the usual practice under Roman law for those condemned to crucifixion.