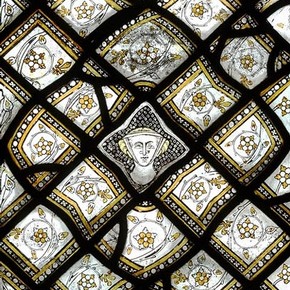 Grisaille stained glass panel with a female head, Paris, France, 1320-1324. Clear glass with paint and silver stain. Museum no. Circ.95-1930. This panel is composed of clear glass painted in grisaille and silver stain, with the bands of yellow creating a strong trellis effect. The fleurs-de-lis within the foliage indicate that it comes from a royal church, in this case the abbey church of Saint-Denis, Paris.

This panel is known as a grisaille panel. 'Grisaille' is a term used for panels of clear glass with simple, often monochrome only, decoration. The panel is composed of clear panes of glass painted in black/brown pigment with an interconnecting pattern of stylised foliage on long stems. Each pane has borders painted with a silver compound which, once fired in the kiln, produces a yellow/orange colour that sinks into the clear glass. This technique is known as 'silver stain', hence the term 'stained glass'.

The interconnecting foliage and stems, together with the yellow borders that join the quarries (the irregular-shaped panes of glass) in a lattice-like structure, show that the glazier conceived of the panel as part of a unified whole. Later in the medieval period, and especially after the Reformation, grisaille windows were often composed of pieces of glass painted with single images that are not connected to one another. Such quarries were probably mass-produced and came from stocks in the glaziers' workshops, whereas these here would indicate a specific commission.

It is only fairly recently that this panel and six others (one in the V&A, Museum no. 940-1900, the others now in France and the USA) have been thought to come from the abbey church of Saint-Denis in Paris. Like many other religious institutions in France, Saint-Denis was closed by the French Revolutionary government in the 1790s. The stained glass windows in these institutions were removed. Those that survived were scattered, and some eventually ended up in private or museum collections.

The panels came from the chapel of St Louis, off the north aisle of the church, which was one of several chapels added on this side of the nave between 1320 and 1324. The chapel of St Louis was dedicated to the former Louis IX, who ruled France from 1226 until his death in 1270. Miracles occurred after his death, which led to his canonisation in 1297.