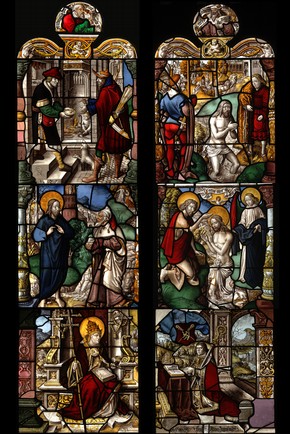 The narrative depicted by the stained glass began at the cloister entrance, in the south-west corner, with the scene of the Annunciation (the moment when the Archangel Gabriel tells the Virgin Mary that she will bear a son). The visitor then walked clockwise around the cloister viewing the stories relating to the Life of Christ.

The windows were arranged so that these scenes fell into three sequences. The west walk was devoted to the Childhood of Christ, the north walk to the Miracles and Teachings, and the east walk to the Passion of Christ (the Crucifixion and the events leading up to it).

In this reconstructed window the Old Testament 'type' of Jacob tempting Esau to sell his birthright is above the New Testament 'antitype' of the Devil tempting Christ. The 'type' of Naaman being healed of his leprosy by the purifying waters of the River Jordan is above the 'antitype' of Christ instituting redemption through baptism by water. It is not known whether the donor (Heinrich von Binsfield, abbot of Kornelimunster Abbey) and patron saint (Pope Cornelius) panels were originally with this particular window.

The pairing of events from the Old Testament with scenes from the Life of Christ could be found in late medieval printed blockbooks, for example the Biblia Pauperum (Bible of the Poor) and the Speculum Humanae Salvationis (Mirror of Human Salvation). These books were widely circulated as religious education texts.

Another source used by stained glass workshops was the new medium of printed copper-plate engraving. The panel showing the Baptism of Christ in the River Jordan is derived from an engraving made by the artist Martin Schongauer. His work was greatly respected for its clarity of composition and was sold widely in Europe 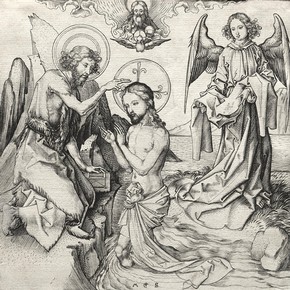 The Baptism of Christ in the Jordan, engraving by Martin Schongauer, Germany, 1450-91. John L. Severance Fund 1952.78T. © The Cleveland Museum of Art 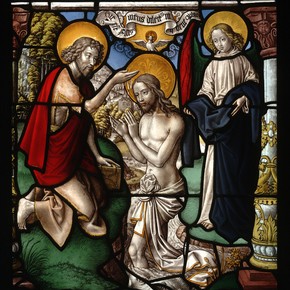 This short film shows the processes involved in creating a replica of a piece of stained glass in the V&A's collections. The original panel is also from Germany, from the choir of Erfurt Cathedral in Thuringia, but is earlier than the Mariawald glass, as it is dated about 1375 (Museum no. C.200-1912 ).

This subject was written by Terry Bloxham, 2009.

The V&A would like to thank The Cleveland Museum of Art for permission to use images.