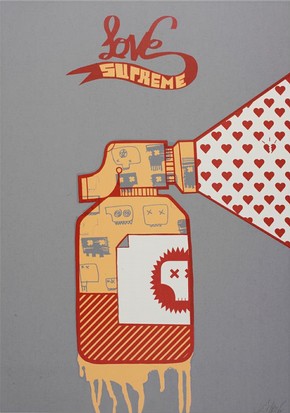 'Love Supreme', screenprint by Sickboy, about 2004. Museum no. E.382-2005. Purchased through the Julie and Robert Breckman Print Fund. © Sickboy and Pictures on Walls

Street Art is a diverse, constantly evolving art form, one that moves across the derelict buildings, bus shelters and hoardings of cities across the world. Graffiti galleries on the internet take the street art scene from local to global, in your face but transient. The genre is as difficult to pin down as is to define - shifting rules apply. Street art has its roots in history, echoing cave paintings and stencilled slogans and images in political campaigning. The work collected by the V&A is figurative, rather than based on writing.

The V&A collected these works in an effort to capture an ephemeral contemporary aesthetic and a form of printmaking that have influenced mainstream graphics. Most notably recent advertising has been using the language of street stencils, plundering underground visuals in an effort to appeal to the young consumer.

There exists an energetic production of websites and magazines that archive this work, created by a network of peers. The one defining feature of the genre is its accessibility. It is unexpectedly available for view on the boarded up windows on your high street, or shared on the internet for all to see. Although street art is a genre defined by its outsider status, some galleries are now exhibiting it, bringing it in from the outside.

The V&A has traditionally collected new forms of printmaking, as well as ephemera and various forms of graphic art. Artists seen here use varying methods of image-making, ranging from simple stencilling to digitally printing multiple stickers, all of which can be grouped together under the heading 'printmaking'.

These works, alongside examples of other forms of printmaking, ephemera and graphic art, can be seen at the V&A's Prints and Drawings Study Room .

For books on street art, including books by artists seen here, visit the National Art Library . 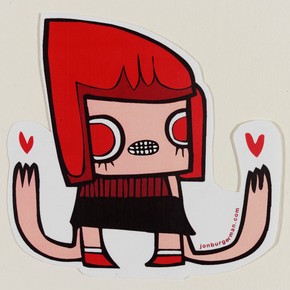 Tell me about your educational background/training?
I studied on an art foundation in Bournville, Birmingham and then moved on to Fine Art in Nottingham University. It was a one year course stretched out over three gently paced full-time years, we loved snoozing in the afternoon. I enjoyed the course as there was a lot of freedom to experiment in different media and with different ideas, it felt like there was a lot of opportunities to do stuff.

How did you come to choose the medium /media you work in?
Several factors conspired towards that; Ease of working in it, affordability and the low technical expertise required.

What/who influences you?
Lots of different things, it's hard to pin point it to any one particular field. Like most people I find it hard not to be influenced and inspired by what surrounds us. Art shows, books, movies, computer games, music, Saturday morning cartoons, adverts, posters, sweet wrappers, leaves and root vegetables are all currently things I take influence from.

What is your relationship with the 'traditional' art world, if any?
It's easy to say what I'm not rather than what I am. I don't feel like I'm a designer, illustrator or animator. An Artist is an easier term to be labelled with as it's so vague, and I guess that makes sense, as most of the time I feel pretty vague.

How do you publicise your work?
I have websites, show work in galleries, have work published, make products, give out stickers, doodle on walls, etc ... It's a mix of work and promotion, the two meld together and hopefully get a little muddled up.

What projects are you working on at the moment?
I've been designing a collection of vinyl and plush toys with Hong Kong based manufacturer Flying Cat (see http://www.jonburgerman.com ). These should be released over the course of 2006. I've also been preparing for a solo exhibition in Paris happening in May 2006.

Describe your style.
Hand drawn characters, creatures, doodles and scribbles. The works are sometimes interwoven and connected, playing with the 2d space and generally messing around. I don't mind if there's mistakes or imperfections in my work and even though it's often scanned into the computer I don't want it looking too clean and 'photoshoped'.

Stickers and books featuring Jon Burgerman are held in the V&A collection.

Tell me about your educational background/training?
I attended art college.

How did you come to choose the medium/media you work in?
Compulsive appropriation. Anything that makes a mark is useful.

What is your relationship with the 'traditional' art world, if any?
I'm some sort of artist I reckon, I regard the art world, it is ignorant of me.

How do you publicise your work?
I stick it onto walls where people might see it.

What projects are you working on at the moment?
More drawing, more photocopying, more stickering.