Prints and drawings, including fashion illustrations, architectural drawings, design drawings, watercolours, posters and much more, not on display in the galleries, can be seen in the Prints & Drawings Study Room. To make it easier for teachers and lecturers to access the most popular material with groups, we have developed themed study room resources which contain original prints and drawings.

This study room resource examines the development of book illustration. 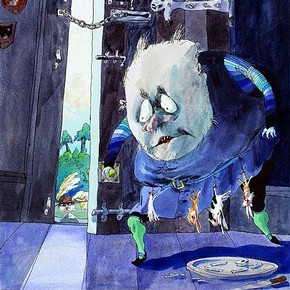 We set Year 8 students of Art & Design at Royal Russell School, Surrey, the project brief of writing and illustrating a children's storybook. The book was to be for one of two age categories, 5 to 7 year-olds and 8 to 11 year-olds. The number of words was not to exceed 500. The theme of the books was 'animals', which they were allowed to interpret in any way they thought appropriate.

The Art Department ran the project in conjunction with the English Department and in the preliminary stages this cross-curricular link was extremely important. As the students started to produce their story-lines, they were given extra help in organizing their stories so that there was a definite beginning, middle and end. They considered the language level appropriate to the age group for which they were writing. Once they had outlined the basic story, students were ready to start the process of relating images to the text.

The students were then asked to think about some of the elements of illustration, such as scale, media, layout and format. 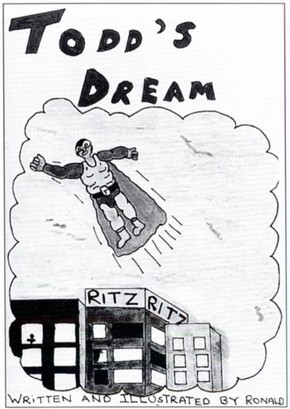 While work was progressing on story-boards, we decided to use the Prints & Drawings Study Room to examine the work of professional artists and illustrators.

Great debates took place on which part of the text should be illustrated, and why, and how to find the subjects or models for the stories. Family pets suddenly found themselves being drawn and books about wildlife disappeared from the shelves of the school library. As there were 60 students in the year group, we booked three sessions back-to-back on two consecutive weeks so that the number of students in the Prints & Drawings Study Room at any one time did not exceed 10. The activities focused on looking at different styles of illustration, which included some quite recent work. The students also started to decipher the story told in each illustration even when there was no text to give any clues. They were asked to assess the era of the different styles of illustration, based purely on the visual and literary styles of the work. The students began to unravel some of the social statements concealed within the illustrations. They particularly liked looking at Victorian illustrations, and they found the idea that `children should be seen and not heard' very odd!

They began to appreciate that many of the illustrators used their own environment as the background for their work, that illustrations could work at many different levels and also that there was more than one way of drawing.

The next exercise required them to record directly from the exhibits so that they had some research material to take back to the classroom. While one group was busy in the Prints & Drawings Study Room, the other two groups were recording artefacts that carried stories in other parts of the Museum. The objects ranged from an altarpiece depicting the life of St George to the comic strip style of decoration showing the story of the West Chamber on a vase in the China gallery. Sculpture and textiles also came under close scrutiny, as well as paintings.

On the visits I enjoyed adding to my own knowledge about book illustration. An added bonus of using the Prints & Drawings Study Room was that being in a different environment had a very positive effect on the way we related to each other. The students enjoyed working in the same room as adults who were also pursuing research work. They entered into their work with great gusto and took pleasure in the praise they received from others in the Prints & Drawings Study Room when they produced good work. This was an interesting development that I had not anticipated and is rarely experienced in the classroom. 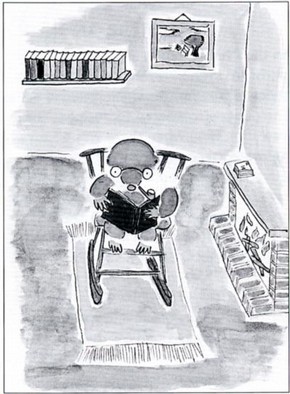 Back in the classroom the sense of real involvement with the project was obvious. Students themselves called for more time for homework and wanted to make a better job of it.

The project ran for approximately 20 hours in total, including homework time, over the course of a term. This was much longer than I would normally set for 12-year-olds but the high level of interest carried them through. Having set a deadline to finish they had to produce story-boards and character sheets, test their material, organize a rough layout of the book and sort out the final text and illustrations. They were also given the option of word-processing their text and several of the children who have quite severe dyslexia problems really welcomed this. It meant that they could spell-check their text and present their work in a way which they could feel proud of.

The final stage of the project was the assessment. I placed the students in the role of book critics and asked each to assess the work of at least two of their classmates. They had to evaluate the work in terms of overall presentation and whether the language level was relevant to the age group. They then had to make appropriate suggestions about how the author could improve the book if they had the opportunity to do so. At this point a shortlist of books for a `Booker' prize was drawn up by the staff, although the students did have some say.

Two books from each age category were taken to the Junior School and read by the authors to the children in the age range for which they were written. The potential customers, who were not necessarily aware of their part in the judging, decided on the winner for each group and prizes were awarded to the winners and to the runners-up.

The impact of the project

For my part, I feel that many positive things came out of this project. By taking the students out of the classroom they were exposed to material that they could not have had access to if we had stayed in school. This material, often in a completely different format to conventional books, made them look much more closely at other areas of story-telling. I will be extremely surprised if they ever look at a book in quite the same way again.