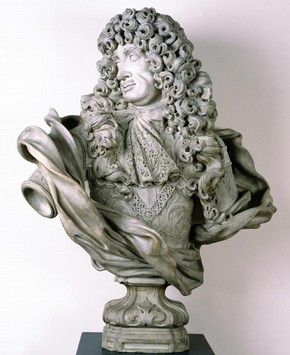 In 1649 Charles I was executed. During the period 1649 to 1660, England was a Republic governed by Oliver Cromwell, the Lord Protector. The restoration of Charles I's son, Charles II, to the throne in 1660 ushered in a period of great opulence in English art, architecture and design. Charles II and his followers had spent the years of exile in France and The Netherlands and on their return brought with them a taste for the latest European styles. Foreign-trained artists and craftspeople working in England also used flamboyant forms and rich materials.

Flowing, curvaceous forms were characteristic of the Restoration style. Elaborate carving and high-relief decoration created a sense of movement that was gracefully contained within the symmetry of the overall design.

In the mid-17th century a new technique of producing spirally twisted forms by turning the wood on a lathe was developed. This was used to create supports for furniture and architectural woodwork.

Fruit, flowers and leaves had long been used to decorate objects. In the 17th century, however, a growing interest in botany led to the creation of increasingly realistic natural motifs.

The acanthus leaf is a motif that features in many styles. Its scrolling growth made it particularly popular in the Restoration period. The leaves were used as a band of decoration around objects, as architectural features or to create flowing, ornamental forms.

As heir to the throne, Charles II spent 12 years in exile in Europe where he was able to absorb new developments in Continental style. On his restoration in 1660 he set about refurbishing his royal palaces, particularly Windsor Castle. Charles valued the arts as a way to assert the renewed power of the Stuart dynasty. He actively encouraged foreign artists and craftspeople to come to England and was a great supporter of the architects Christopher Wren and Hugh May. The king's patronage ensured that the new Restoration style flourished

Sir Christopher Wren is one of the most famous architects in British history. He was also a renowned scientist and mathematician and it was his study of structure and geometry that led to an interest in architecture. In 1665 Wren travelled to Paris where he was able to study the new, sophisticated styles of Classical architecture that were developing in Europe. His big opportunity came after the Fire of London of 1666 when he was appointed to rebuilt numerous city churches including St Paul's Cathedral. The dramatic buildings Wren created transformed the London skyline.

John Evelyn was a diarist, writer and collector. Between 1643 and 1652 he travelled extensively in France and Italy. He stayed in all the major cities, studying languages, art, antiquities and gardening. After the Restoration he served Charles II and James II and wrote a number of books. He was an avid collector, particularly of prints and medals, but his most famous possession was a cabinet adorned with hardstone panels and bronze plaques. Evelyn's diaries, not published until the early 19th century, give a great insight into the Restoration period.

Squerryes Court in Westerham, Kent, was built in 1680 by Sir Nicholas Crisp. It is not as opulent as many of the houses built for the nobility, but is typical of the kind of manor house that developed in the Restoration period. The relatively simple, yet refined style was influenced by Dutch architecture. Squerryes Court is a perfectly symmetrical building, two storeys high with an attic in the roof. Constructed of brick, it has a classical pediment and columned portico.
www.squerryes.co.uk

On his restoration Charles II set about remodelling Windsor Castle in a style that would match the magnificence of the palaces he had seen in Europe. The architect Hugh May was responsible for the designs of the new State Rooms which were created between 1675 and 1685. The Royal Chapel was one of most spectacular Restoration interiors in the country. The elaborate colonnade, ornate twisted columns and vast floral swags framed scenes of Christ's miracles and the Last Supper by the Italian painter Antonio Verrio. Above, a cloud-filled ceiling showed the Resurrection. The interior of the Royal Chapel was destroyed in the course of the remodelling of Windsor that took place in the early 19th century.

Ham House, in Richmond near London, is one of the most perfectly preserved 17th-century houses in Britain. It was built in 1610 by Sir Thomas Vavasor, but was enlarged and refurbished in the 1670s by the Duke and Duchess of Lauderdale. John Evelyn described the sumptuous interior as being 'furnished like a Great Prince's'. The Queen's Closet has ornate gilt carving and walls hung with rich brocaded satin. The scrolling leaves and flowers that decorate the fireplace surround are executed in scagliola, a type of imitation stone.
www.nationaltrust.org.uk/ham-house

Read more about the Baroque style