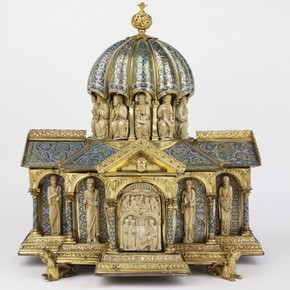 Romanesque is a modern term describing the art and architecture produced in Western Europe in the period 1000-1200. The style used the art of the Roman Empire as a principal source of creative inspiration. It also drew upon Scandinavian and Islamic traditions, as well as those of the Christian centres at Jerusalem, Constantinople and Rome. The style was international and can be traced all over Western Europe.

Repeated ranks of round-headed arches were a characteristic feature of Romanesque architecture. They echoed the magnificent buildings of ancient Rome. These arches were ornamental as well as structural, and could be used to frame statues and other images. Round arches appeared on smaller objects as well as on buildings. They provided borders for scenes, or indicated important figures such as rulers and holy people.

Plants with stems curling up like scrolls of paper appear often in Romanesque art and architecture. When reinterpreting this ancient motif, stone-carvers produced work that drew upon a range of cultural traditions. Romanesque scrolling foliage shows similarities with Scandinavian and Celtic knot-work patterns, as well as plant ornament from the Islamic world.

Romanesque artists handled the human form in an expressive manner. Hands are often large and prominent in Romanesque art. They might highlight the interaction between figures, or draw attention to something important. Sometimes the fold and fit of clothes are used to suggest the shape, position and movement of the solid body underneath. In other cases, the folds form an appealing abstract pattern.

Fantastic beasts were a frequent subject in Romanesque art. Special books, called bestiaries, described the appearance and behaviour of different creatures, along with their meaning in Christian religion. They included fantastic animals as well as real ones. Ewers, which were used in noble houses as well as churches, often took animal form.

Hidegard was the founder and abbess of a nunnery near Bingen in Germany. She was a mystic, who also composed music, wrote about the natural world and went out on preaching tours. She was also responsible for the creation of some of the most enigmatic images in Romanesque art. The manuscript illuminations that accompanied her mystical writings vividly reproduce the flashing lights and strange figures of her visions.

Hugh, later St Hugh the Great, was abbot of Cluny from 1049 to 1109. He was one of the leading figures in Europe, as godfather to the Holy Roman Emperor Henry IV and close friend of Pope Urban II. Under Hugh, a massive new church was constructed at Cluny. It was one of the most important Romanesque buildings in Europe, though little now survives. Late in his life, Hugh oversaw the decoration of the nearby priory of Berzé-la-Ville with spectacular wall paintings.

Henry, brother to King Stephen of England, became Bishop of Winchester in 1129 and was Papal Legate in 1139 - 43. Winchester was the richest bishopric in England. Henry build palaces and castles as well as commissioning works of art in different media. He encouraged the use of black Tournai marble in England, probably because it reminded him of the multicoloured marbles he had seen abroad. In 1151, she shocked churchmen in Rome when he bought pagan statues to take back to his palace.

After the Norman conquest of 1066, the major churches built in England reflected the style of northern France. Durham Cathedral is the earliest building to make prominent use of chevron (or saw tooth) decoration around arches and doorways. Chevron became a characteristic feature of Romanesque architectural ornament.
www.durhamcathedral.co.uk

Romanesque architectural sculpture was centred upon doorways, spreading outwards across the façade. The west façade of the church of Saint-Gilles-du-Gard resembles the Roman triumphal archways built to celebrate military achievements. Its sculpture illustrates the idea of Christian salvation as a triumph over evil.

The Shrine of St James in Spain is one of the most important pilgrimage destinations in medieval Europe. The Romanesque cathedral in which it was located was built to receive great numbers of pilgrims. A statue of St James greets them on the central divide of the great middle doorway on the west façade. He is seated looking out at the viewer with a calm, expressionless gaze that suggests heavenly serenity.