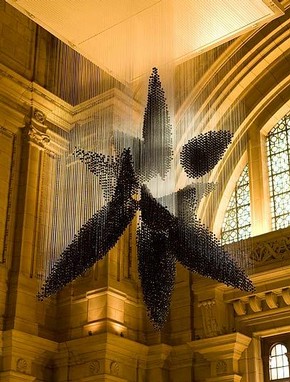 The Swarm chandelier was designed by Zaha Hadid, one of the most highly regarded architects working today. Her buildings are often extraordinary, sculptural forms that push the boundaries of engineering and technology. Like them, Swarm is an abstracted organic form.

Swarm is made in an edition of eight by the young British furniture manufacturer Established & Sons. It is composed of 16,000 suspended black crystals, each painstakingly suspended by hand on individual wires.

Because it has no internal light source, strictly speaking it is not really a chandelier. Rather, it is an example of a recent phenomenon whereby leading designers and architects produce objects that are less about their functionality than they are expressions of their conceptual or theoretical exploration.

One of Hadid's principle concerns throughout her career, which stretches back to the 1970s, has been capturing a sense of dynamic energy in the shapes of her buildings. The Swarm chandelier is similar. Its form suggests a freeze-frame of an explosion, with fragments spinning away in all directions from the centre. Or, perhaps the dynamic thrust is inward, rather than outward, and the swarming crystals are like particles magnetically clustering together, that are about to implode into a black hole. Alternatively, the black crystals are like a swarm of many birds or insects that behave as a united entity, moving together as a single ever-changing organic form. The architect is not specific about her intentions, but the idea of flowing energy directing the shape of the object connects all these ideas, as it does the forms of her buildings.