The history of musical etiquette 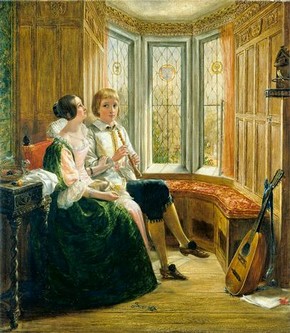 Social conventions have applied to both playing and listening to music, but over the years they have operated very differently.

In the 16th century musical ability was seen as an expression of good birth and good education. Lord Herbert of Cherbury regarded playing the lute as a more civilised pastime than drunken debauchery. The Tudor monarchs Henry VIII and Elizabeth I were both renowned for their skill, the king on the lute and harp and the queen on the virginals.

This attitude continued into the following century. Roger North, a gentleman architect and amateur musician writing in the 1690s, recommended the viol, violin, organ, harpsichord and double bass for men, and the spinet or harpsichord, lute and guitar for women. However, he thought the harpsichord better for a lady's posture than the lute.

During the 18th century, members of the nobility continued this tradition. In Hungary Prince Nikolaus Esterházy, a gifted amateur, employed Joseph Haydn to compose pieces on the baryton, his favourite instrument. In Britain, William Wellesley, 3rd Earl of Mornington was a talented performer and Thomas Erskine, 6th Earl of Kellie a well known composer. 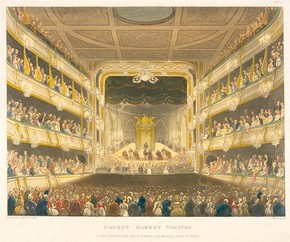 However, many preferred to hire musicians rather than play themselves. The Duke of Chandos, for instance, employed an orchestra of musicians who also functioned as servants at his country seat at Cannons, Middlesex. In 1749 Lord Chesterfield, who regarded himself as an expert on etiquette, instructed his son: 'If you love music hear it; go to operas, concerts and pay fiddlers to play for you; but I insist upon you neither piping nor fiddling yourself. It puts a gentleman in a very frivolous, contemptible light.'

For people like Lord Chesterfield, opera and concerts were social occasions, where people went to be seen, to circulate and to gossip. With the music simply as a background for dancing and conversation, they would have been noisy and boisterous in comparison to present-day musical events.

At home, music continued to be a polite accomplishment, particularly for young ladies in need of a husband. The Victorian age is associated with musical evenings and no house was complete without a piano, whether a grand piano in the drawing room or an upright piano in the parlour. Also, women were now allowed to play the violin. In 1839 the journal Musical World said, 'we think so highly of ladies and the violin that we rejoice at every opportunity of their being introduced to each other'. 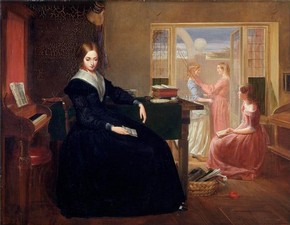 In both private houses and public concerts, the audience was expected to listen in silence, just as it is today. This could be tiresome. Charles William Day, in his Hints on Etiquette and the Usages of Society (1836), wrote:

'It is generally the misfortune of musical people to be such enthusiasts, that … they seldom know when to leave off … The listeners get fidgetty [sic] and tired, although they are usually too polite to say so. … A song now and then is very desirable, as it is a relief to conversation, but half a dozen consecutively … would become a bore.'

Day also reminded his readers that the job of the accompanist was to accompany and not to drown out the singer. Fortunately, he wrote, 'when highly gifted musicians are found in private society we have generally observed their delicacy to be in proportion to their excellence.' One such performer was Frédéric Chopin, who captivated an audience and delighted in meeting Queen Victoria at Stafford House in 1849. He had a less rewarding evening with the Duke and Duchess of Hamilton, particularly when one of the visitors contributed with 'the most dreadful tunes' on a concertina and left him with the impression that they were all mad

Nevertheless, even if the audiences were not always sophisticated, there was plenty of money to be made by performing in Britain, especially London, with its long tradition for privately financed public concerts. 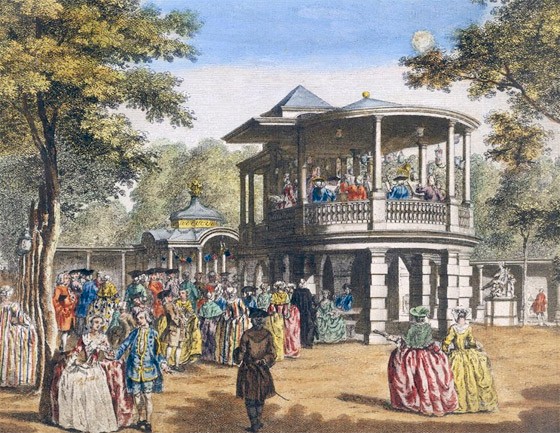 'Vauxhall Gardens showing the grand walk at the entrance of the garden and the orchestra with musick playing', Johann Sebastian Muller, about 1751. Museum no. W.27BB-1947