The Modern Shop: Architecture & Shopping between the Wars 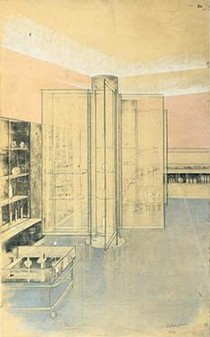 In the 1920s and 1930s architects produced a number of striking shop designs in Britain. Influenced by the 1925 Paris Exhibition and other Continental examples, many shops and chain stores rebuilt their premises, or at least modernised their façades. Architects became interested in shop design, using marble, neon and chrome, and critics praised the way in which the Modern Movement revitalised this sphere of design. Many of these innovative interiors and façades are now sadly gone.

The Influence of the 1925 Paris Exhibition

An international exhibition was proposed for Paris in 1914 but postponed because of the First World War. The proposal eventually became the Exposition Internationale des Arts Décoratifs et Industriels Modernes, held in 1925. French department stores such as Printemps and Galeries Lafayette joined in enthusiastically, building pavilions in the exhibition grounds. Many of the visitors were entranced by the luxurious French Moderne design. They quickly and cheaply copied the look, using motifs like stylised flowers, frozen fountains and angular outline shapes in their own designs.

Shop owners in the early 20th century had an ever-greater amount of merchandise for sale and display. Also, the growing number of department stores needed taller buildings and large open-plan spaces. Architects used the latest technologies of steel frames and large sheets of plate glass to meet this demand. Electric lighting and reflectors, concealed above the ceilings of display windows, replaced gas lighting, making window displays more attractive. Fashionable styles, from Beaux-Arts classicism to neo-Georgian, and even quirky styles like Art Deco Venetian and Tudor Revival, were used.

Many multiples in Britain in the interwar period adopted a standard or uniform design in their shop branches. This was done to promote corporate identity and encourage brand loyalty in their customers. Distinctive lettering and recognisable motifs on the façades were used to achieve this. Standardisation also saved on design costs, as a single design could be adapted to fit a number of different sites and locations. Many companies used their own in-house architects to do this work, rather than employing expensive outside architects.

Through the 1920s shop fronts, and shop design in general, became of increasing interest to British architects. Magazines and books provided new ideas in shop design, often taken from examples in Holland, France, Czechoslovakia and Germany. Later, in the 1930s, an influx of émigré architects to Britain, including Erich Mendelsohn, Ernö Goldfinger and Walter Gropius, brought a further proliferation of European ideas. American retailing methods and shop design were another source of inspiration, for both architects and entrepreneurs.

The Emergence of Modern Shop Design in Britain

The 1925 Paris Exhibition and the coverage it received brought to public attention many new ideas in shop design from Europe. These first appeared in elite one-off shops, but later filtered down to provincial level and to multiples. There was a move towards cleaner and simpler lines. Façades were smooth and curved without fussy mouldings. New materials like Vitrolite, a type of opaque glass, gave the glossy finish of polished stone without expensive craftsmanship. Block or box letters, some in stainless steel, were applied directly to the fascia, often as the only decoration.