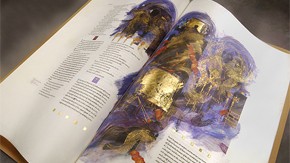 For many years Donald Jackson, Senior Illuminator to Her Majesty's Crown Office, dreamed of creating a modern illuminated Bible to celebrate the new millennium. In November 1995, he presented the idea to Saint John's Benedictine Abbey & University in Minnesota. Work started in 2000 and is scheduled for completion in 2007, at a total cost of over £2 million. It is taking place in a scriptorium in Monmouth, Wales, under the artistic direction of Donald Jackson and his team of scribes and illuminators.

The production of the Saint John's Bible is a combination of the ancient and modern. It emulates the spirit of the great medieval Bibles, using animal skin, handmade quills and natural, hand-ground inks and pigments. Yet at the same time it incorporates the latest computer technology and contemporary texts (the New Revised Standard Version). The seven volumes of the Bible will eventually be bound in 200-year-old Welsh oak boards and permanently housed in the Hill Museum & Manuscript Library at Saint John's Abbey & University.

The materials
Vellum or calfskin was chosen as the best writing surface for the Saint John's Bible. It is extremely strong and after treatment provides the perfect surface texture on which to write and paint. Mistakes can be removed using a sharp knife. To restore the writing surface, the abraded area is brushed with powdered sandarac, a resin from a North African conifer.

Quills made from goose wing feathers are used for writing the main text. Turkey and swan quills are sometimes used for heavier letters and chapter headings.

The black ink used throughout is mixed from Chinese stick ink. Pigments (vermilion for red and a mixture of azurite and ultramarine for blue) are used to indicate the start of paragraphs, the verse numbers and marginal notes for the New Revised Standard Version. 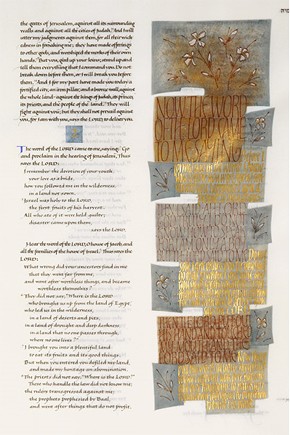 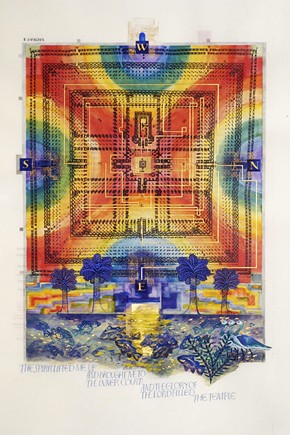 The script and the calligraphers
The Saint John's Bible is written in a script designed by Donald Jackson. Because of the large amount of text, the writing has to be small. A good clear script in a two-column format was finally chosen. It is easy to read to the modern eye and has a strong enough texture to work with powerful illuminations.

The first task for the calligraphers that joined the project was to learn the new script. They began by making a detailed examination of its style and texture, producing dozens of practice sheets. Once underway, it takes the calligraphers between seven and a half and thirteen hours to complete the 108 lines on each page.

To ensure that each page matches the one facing it, care is taken that the two pages are written by the same calligrapher. The vellum pages pass through many hands before completion. Footnotes, book headings, chapter numbers, capitals and Hebrew text are added at different stages by different calligraphers.

A committee was formed to advise the Scriptorium on the theological aspects of the text and illuminations. Called the Committee on Illumination and Text, it is based at Saint John's Abbey & University and consists of Old and New Testament scholars, as well as historians, art historians and artists.

The committee selects the passages from the Bible to be illustrated. Donald Jackson then makes preparatory sketches and sends them with explanatory notes to the committee for review. Several exchanges are sometimes made before work can begin on the illumination.

Computer-aided design
A computer was used to plan the layout of the Bible. It had a malleable font to create a distribution of letters and spacing that mimicked the stride and rhythm of Donald Jackson's handwritten script. Once the NRSV copyright holders had agreed the design of the text treatments, production of the Bible began.

Decorative elements
Certain sections of the Bible are singled out for special emphasis. These are sections of text that are used regularly in worship. They are referred to as Special Treatments and are often written in larger lettering and decorated with gold and colour. They appear as illustrations within the main body of text or in the margins.

Donald Jackson chose plants and insects from the woods and prairies around Saint John's Abbey & University to inhabit the margins and some interpretive illuminations. They are used as a metaphor for the wonder of God's creation and to emphasise the unique connection between this Bible and Saint John's.

Motifs from rubber stamps are used throughout the Bible to decorate the margins, and in some instances to mask show-through of images on the reverse of the page. These stamped patterns are also used in the full page illuminations of the Bible.

The term illumination comes from the Latin illuminare to make light or illuminate. When used of manuscript painting, it refers to the glowing colours such as gold or silver.

The Scriptorium, Monmouth, Wales
A scriptorium or writing room is the term generally used for a place in a monastery or church where books are made. Donald Jackson, for whom the project has been a lifelong dream, established his contemporary scriptorium as a centre for his team of visiting scribes and illuminators. They come to produce and discuss their work and to bond as a team.

All the objects reproduced on the website are on loan from Saint John's Abbey & University or Donald and Mabel Jackson.

The Saint John's Bible edition. Special issue of The Scribe: Newsletter of the Society of Scribes and Illuminators 75 (summer 2000).