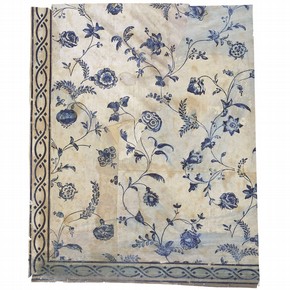 Textile wallhangings of various kinds were the precursors of paperhangings, so it is not surprising that the earliest and most consistent influence on wallpaper design has come from textiles. It is important to make a distinction, however, between wallpapers made to match fabrics, and vice versa, as is common practice now, and wallpapers which derived their patterns from textiles and were intended to imitate them.

There are odd examples of the former in the 18th century, for example Horace Walpole (in a letter dated 12 June 1753) describes a sitting room 'hung with a blue and white paper in stripes adorned with festoons, and a thousand plump chairs, couches and luxurious settees covered with linen of the same pattern'. John Sigrist's trade card from the 1770s also offers to make papers to match fabrics, but generally speaking wallpapers were designed to imitate the styles, patterns and textures of fabrics, and effectively to represent textile wall coverings.

In Holinshed's Chronicle (1577), Sir William Harrison's 'Description of England' includes an account of the kinds of wall coverings then in use:

'The walls of our houses on the inner sides in like sort be hanged with tapestry, arras work or painted cloths ... or else they are celled with oak of our own, or wainscot brought hither out of the east countries, whereby the rooms are not a little commended, made warm and much more close than otherwise they would be.'

In consequence, wallpapers were designed to look like the materials they were substituting. What is thought to be the earliest known wallpaper in England was found in the Master's Lodge in Christ's College, Cambridge, and has a formalised pomegranate design derived from a contemporary Italian velvet or damask. Although traditionally dated to around 1509, it is more probably late 16th century.

A number of the earliest wallpapers are described in advertisements as being 'after the manner of real Tapestry': in the early 18th century the Blue Paper Warehouse was offering 'Forest-Work ... after the Mode, of real Tapestry'. The term 'forest-work' implies a pattern of foliage. In France, papiers de tapisserie - single-sheet pictorial papers, each part of a larger design imitating a tapestry - continued in use into the 1760s. These decorations, with their landscape subjects, hunting scenes and so on, were the precursors of the panoramic papers which appeared around 1800. 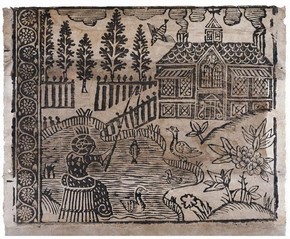 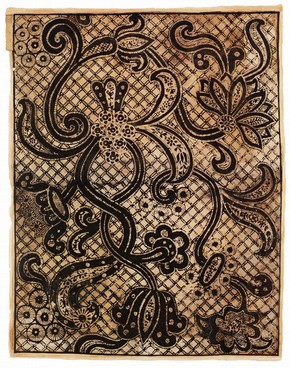 Tapestries themselves were already being imitated by painted cloth hangings, and these were in turn imitated by printed sheets for wall decoration. Several of these latter designs survive, all from the period around 1680-1700 and all very similar in style, with block-printed outlines, some plain, some with stencilled or hand-painted colour. Each of these surviving designs is pictorial: a stag hunt, a house and garden with a robed figure, a woman in a garden beside a fountain, and a seated woman fishing in a pond, with a house beyond. The papers have been discovered in various locations - in the drawer of a chest, lining a deed box at Clandon Park, and at Colonial Williamsburg; only one example has been found in use as a wallpaper - the Stag Hunt design in a first floor front room at The Shrubbery, Epsom.

The 1738 edition of Chambers Cyclopaedia of Arts Sciences has no entry for paperhangings but has the following comment under 'Tapestry':

'Some use "Tapestry" as a general name for all kinds of hangings whether woven or wrought with the needle; and whether silken, woollen, linen, leathern, or of paper (in which they are countenanced by the etymology of the word formed from the French: tapisser; to line, Latin: tapes, a cover of a bed etc.).'

Other textile wallhangings included embroideries, chintzes, silks, cut-velvets and damask. The first trade cards advertising paperhangings offer imitations of textile wall coverings such as 'Irish stitch' [flame stitch], 'Damask' and Turkey work' [English imitations of oriental pile carpets], and others 'after the mode of real Tapistry', and by the later 18th-century 'chints'. The early wallpaper designs are directly imitative of their textile source, to the extent of attempting to reproduce the characteristic stitching of black-work embroideries, the angular patterns of flame stitch, and the delicate filigree of lacework. In almost every case the motifs were floral.

A number of 16th- and early 17th-century lining papers and wallpapers were direct copies of the contemporary embroidery known as 'black-work', in which patterns - usually of flowers and fruit - were stitched in black and silver thread on a white ground. This was easy to reproduce by woodcut printing. The various stitches which made up the in-fill and the different textures of the pattern were carefully simulated by cross-hatched lines.

Although the style seems to have been popular, to judge by the number of embroideries and related papers which have survived, few examples of black-work papers have been found on walls. The majority of extant examples have been found lining drawers and boxes. However, a fine example of a single-sheet design resembling lacework and dated around 1680 came from 14 Market Place, Kingston upon Thames, and a version with some stencilled colouring was also found at the Shrubbery, Epsom around 1680. The same pattern, with the background omitted, was also used to line a wooden box.

The distinctive zigzag pattern of flame stitch in embroidery was also copied by the makers of paperhangings, who advertised it as 'Irish stitch'. It seems to have been commonplace for the makers of paperhangings to copy their textile sources as closely as possible, even to the extent of using a single graduated colour for each element of the pattern, as in the textile original. The surviving flame stitch patterns, for example, are printed in warm reddish tones.

A handsome paper dating from around 1730 is block printed and stencilled in direct imitation of crewel work, a kind of wool embroidery with a design based on Indian printed cottons characteristic of such textile hangings. The paper is on a similar scale to the embroidery it copies; the latter would probably have been used as a bedhanging. 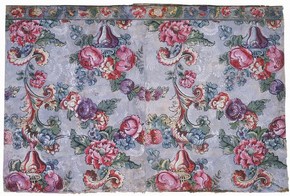 Calicoes and chintzes were often used as wall coverings. Pepys records (5 September 1663) that he had bought his wife 'a chinte ... that is paynted Indian callico for to line her new study, which is very pretty'. Upholsterers and sellers of paperhangings such as Thomas Bromwich (around 1740) advertised that they would hang rooms with 'Chints, Callicoes, Cottons, Needlework & Damask', all of which could be 'Matched in Paper to the utmost exactness'.

By the early 18th century the paperstainers were producing chintz-style floral wallpapers. An early example survives as a fragment with pink and blue flowers from Hampden House, Buckinghamshire. A finely detailed, delicately coloured piece, dating from around 1730, was found at 29 Sackville Street, London, in a back room on the first floor which had probably been either a closet or a bedroom.

Sackville Street was redeveloped in 1730 and the houses occupied by prosperous members of the professions and minor nobility; No. 29 was taken by William East, a barrister who also had a house in Berkshire. Very similar large-flowered papers are pictured in the trade cards of both Edward Butling (around 1690) and James Wheely (around 1754), and were clearly both popular and fashionable. At Paxton House, Chippendale supplied '16 pieces of fine Chintz paper for the Bedchamber and Closet the pattern made on purpose to match the Cotton £6. 8. o'. 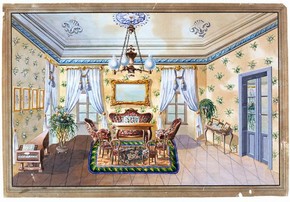 Amongst the many papers found at Uppark (Sussex) was a late 18th-century paper, with a spare and delicate pattern of trailing lue flowers, with a simple cable-pattern border, more closely resembling embroidery or Spitalfields silk patterns of the mid-century. By the mid-19th century the full blown naturalistic floral patterns found on glazed cottons were replicated as wallpapers.

Papers imitating brocaded damasks ranged from formal designs such as a green and yellow design from Wichenford Court, Worcestershire, around 1730-40, to vivacious rococo styles exemplified by a blue-ground paper of 1755-60 with a design of flowers, vases and rococo scroll-work, with matching border, from a house in High Street, Brentford.

Textile patterns of all kinds provided inspiration to the paperstainers. Stripes, flower-sprigged patterns, and combinations of the two were perennially popular. Chippendale supplied '13 pieces of Blue Stripe and Sprig paper @ 6/-' to Sir Ninian Home for a bedchamber at Paxton House, Berwickshire, in 1774. 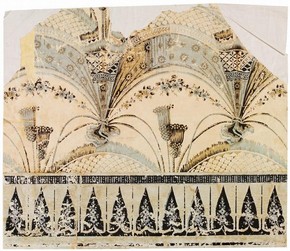 A similar pattern was pasted over the red-flowered flock at 6 St James's Place, London W1. Sprigged patterns are amongst the simplest designs derived from textiles and have never lost their appeal. Derived from printed cottons and sprigged muslins, the 18th-century block-printed examples were succeeded by machine-printed designs in the mid-19th century, and are still a staple of middle-market wallpaper design today. By the 1830s and 1840s these light, simple, pretty patterns were commonly used in bedrooms, but in Germany and Austria the Biedermeier style also favoured this kind of decoration for more public rooms.

French manufacturers, notably Réveillon, produced designs imitating Lyons silks. Lyons, capital of silk weaving, was also the most important provincial centre for the French wallpaper trade, so a cross-fertilisation of ideas and influences was perhaps inevitable. Réveillon used multi-coloured flocks to copy silk patterns, in contrast to the largely monochrome English flock papers. He also copied silks in distemper-printed papers, mixing the colours with varnish to give the finished paper a silken sheen. Irisé (a method of blending colours to give a subtly shaded effect) was also used for papers which were designed to reproduce the effects of a silk wall covering. These trompe l'oeil techniques reached their high point in the early 19th century, when the French excelled at producing papers which effectively imitated drapery. 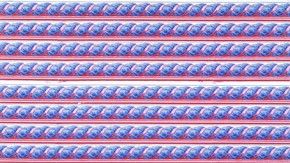 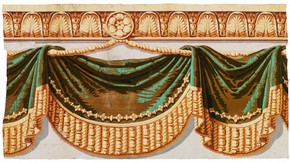 It became the fashion to decorate the walls with papers that appeared to be panels of silk, velvet or satin, pleated, in vertical folds, looped, tied or swagged, and trimmed with cords, tassels and braid. The effect at a little distance was startlingly realistic. Paper borders in similar styles were also produced. These could be used, to less lavish but equally convincing effect, with a plain or lightly patterned wall-paper. The drapery panels were almost exclusively French and were more commonly used in Continental houses.

A watercolour of the drawing room of the Villa Christine in Nice (then Nizza, part of Savoy), painted around 183o, shows walls hung with swagged 'drapery' that is almost certainly a wallpaper from Dufour & Leroy of Paris, produced in 1825-6. By the mid-19th century English manufacturers were also producing borders of pleated and swagged 'fabric', often using flock to simulate velvet. Subsequent illusionistic styles included all-over fabric patterns such as lace.

A number of rooms furnished with textile-patterned wallpapers were recorded by amateur watercolorist Mary Ellen Best who painted views of her various homes in England and on the continent. For her drawing room in York she chose a paper with a design of tasselled braid; a few years earlier she had depicted her room in a new hotel in Rotterdam, with a wallpaper imitating the newly fashionable buttoned, padded upholstery. The effect was comfortable and cosy, in a richly furnished room.

Later in the 19th century, papers imitated everything from carpets and tapestries, to watered silks and woven fabrics. The embossing and stamping techniques first introduced in the 1840s allowed French manufacturer Paul Balin to produce convincing paper imitations of silks, gold-threaded embroidery, and other Renaissance textiles - examples of technical virtuosity and elegant luxury. Some of the finest were exhibited at the Vienna Exhibition of 1873.