The Adoration of the Magi

The Adoration of the Magi 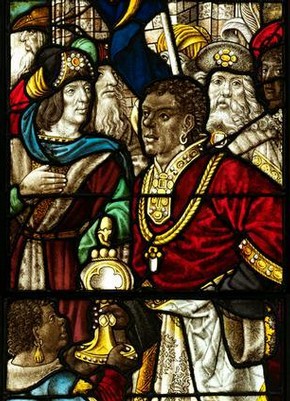 The Gospel of St Matthew records the story of wise men guided by a brilliant star to Bethlehem. They presented gifts of gold, frankincense and myrrh to the Christ Child. The story gained enormous popularity in the early centuries of the Christian church, and still exerts a powerful influence today.

The later tradition that there were three wise men depends on the fact that they brought three gifts. By about 750, they were known as Caspar, Melchior and Balthasar. Gradually, the wise men evolved into kings, based on a similar story of royal gift-giving in the Old Testament (Psalms 72:10). They were said to come from the kingdoms of Tarshish, Sheba and Seba. Seba was thought to be an ancient name for Ethiopia, and in the 14th century the Ethiopian king began to be portrayed as black.

A legend states that St Helena, mother of the first Christian emperor Constantine, discovered the bodies of the wise men/kings in India in the in the 330s and took them to Constantinople (present day Istanbul). Her son gave them to the Bishop of Milan. In the 1160s the Holy Roman Emperor, Frederick I Barbarossa, brought their bodies to Cologne in Germany.

Ever since, the wise men/kings have been especially venerated in Cologne. Their relics are contained in a shrine in Cologne Cathedral. On their feast day, 6 January (Epiphany), thousands of pilgrims visit the shrine.