The Book of Hours of Louis XII 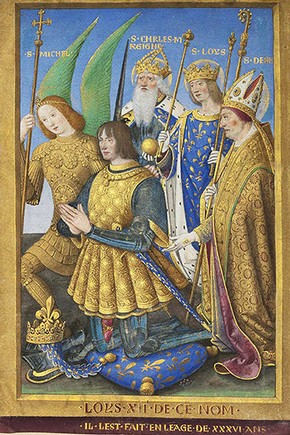 The Hours of Louis XII was one of the greatest French illuminated manuscripts of the Renaissance. A prayer book, it was decorated in tempera and gold on parchment by Jean Bourdichon (1457–1521) for the French ruler Louis XII (reigned 1462–1515) at a time when his court was a principal centre of European art and culture. Bourdichon was court painter to four kings of France (previously to Louis XI and Charles VIII and, subsequently, to Francis I). He probably produced this prayer book to celebrate Louis' coronation in 1498.

It was formerly incorrectly known as the Hours of Henry VII, whose daughter Mary Tudor (1496–1533) was the third wife of Louis XII, and may have brought the book to England when she returned home as a widow in 1515. Its dramatic miniatures are startling in their scale and originality, and the full-page scenes have painted frames, like those of oil paintings.

The figures loom large on the page, and are situated close to the front of the scene. The portrait of Louis XII, now in the J. Paul Getty Museum, would have been the first illustration in the Hours. It was originally the right half of a two-page opening that showed Louis kneeling in veneration opposite a miniature (now lost) of the Virgin and Child, or the Pietà (the Virgin with the dead Christ on her lap).  This page shows the recently crowned king wearing parade armour. His portrait reflects an official likeness, probably originated by Bourdichon.

By the end of the 17th century, the book's original body of around 36 large miniatures was removed and its text broken up. Miniatures and text fragments found their way into various collections, including those of Samuel Pepys, George II and William Beckford. By the late 19th century several were in the British Museum. In 1973 Janet  Backhouse, the distinguished curator of illuminated manuscripts at the British Library, recognised that these and other miniatures and fragments belonged together. Sixteen imposing miniatures, nearly half the original suite of images, have been discovered to date. One spectacular miniature, The Nativity, was acquired by the V&A in 2003. 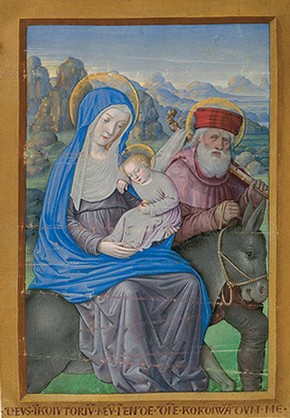 'Flight into Egypt', illuminated manuscript from the Book of Hours of Louix XII by Jean Bourdichon, 1498/9, France. From a private collection, courtesy of Sam Fogg, London.

What is a Book of Hours?

Books of Hours first appeared in the 13th century, and have been characterised as the medieval 'best seller'. The considerable number which survive, especially from the 15th and early 16th centuries, indicate their popularity with well-to-do, literate patrons. They were traditionally hand-written and decorated, on vellum, but some printed editions were later published.

A Book of Hours is essentially a collection of Christian prayers for recitation at different times or 'hours' of the day. These were written in Latin, the language of the medieval church, and were a simplified version of the eight periods of prayer observed by monks and nuns, from Matins in the morning to Compline at night. However, these prayer books were intended for individual use by lay people.

Books of Hours vary to a degree in content and order, and may include special prayers tailored to the individual requirements of their owners. Many have little or no decoration, but by the early 15th century the fashion had developed for luxurious volumes, superbly written and lavishly decorated with miniature paintings. Those made for members of the French royal family include some of the largest and most spectacular ever made. The Hours of Louis XII is one of these.

Further information about the Book of Hours of Louis XII

In 1973, the late Janet Backhouse, the distinguished curator of illuminated manuscripts at the British Library, rediscovered a spectacular Renaissance manuscript which had disappeared from history more than three hundred years before. She recognised that an incomplete and disorganised volume of text leaves given to the British Library in 1757, a group of three full-page miniatures purchased in 1895, and four miniatures in other collections, were all fragments of a major French Book of Hours. Over the last thirty years a further nine illuminated leaves of this manuscript have come to light. This volume, probably executed in 1498/9, is now known as the Hours of Louis XII. Since the recent acquisition of several of its full-page miniatures by the J. Paul Getty Museum and the Victoria and Albert Museum, both institutions have collaborated to re-assemble its surviving parts from collections in Britain, the United States and France. This display was held at Los Angeles between 18 October 2005 and 8 January 2006, and in London between 2 February and 1 May 2006. It is accompanied by a fully-illustrated publication, with essays on the manuscript, its genesis, techniques and history, by Janet Backhouse, Thomas Kren, Nancy Turner and Mark Evans.

Jean Bourdichon (1457/8–1521) worked in Tours during the late 15th century, and was official painter, successively, to four kings of France: Louis XI, Charles VIII, Louis XII and Francis I. In 1481 he succeeded his master, the celebrated Jean Fouquet, as Peintre du Roi. Bourdichon was highly regarded by Charles VIII, who appointed him as valet de chambre, and provided dowries for his daughters. Although documented as a panel painter, designer of coins, stained-glass and silver and gold plate, he is best known as a manuscript illuminator. His sole documented work is the Grandes Heures of Anne of Brittany (Paris, Bibliothèque Nationale, MS lat. 9474), completed in 1508. On the basis of this manuscript, a significant oeuvre of illuminations has been attributed to Bourdichon. He is last recorded in 1520, receiving payment for the decoration of tents for the opulent encounter of Henry VIII and Francis I at the Field of the Cloth of Gold. The Hours of Louis XII was probably made to celebrate the king's coronation in 1498, and its opening miniature depicts him kneeling on a pillow decorated with fleur-de-lys, under the protection of four patron saints of France: the Archangel Michael, the Emperor Charlemagne, the Capetian king Louis IX (1215–70), and the martyr St. Denis. Louis XII was the cousin of his predecessor Charles VIII, and married that king's widow, Anne of Brittany, as his second wife. As a consequence of his military campaigns in Italy from 1499–1503, Louis became the first northern monarch to imitate the Italian practice of issuing coins bearing the ruler's portrait, and adopted the title 'Père du Peuple' - a variation on the classical formula 'Pater Patriae'. During his reign, the French court was re-established as a principal centre of European art and culture, and its royal imagery was translated into a Renaissance mode: a process to which Bourdichon substantially contributed.

The Hours of Louis XII was formerly, incorrectly believed to have belonged to Henry VII of England, whose daughter Mary Tudor (1496–1533) became the third wife of the French king. She may have brought it with her when she returned home as a widow in 1515. The manuscript was definitely in England by the end of the 17th century, when its complement of around three dozen large miniatures was removed, and its text broken up. Fragments gradually found their way into various collections, including those of the naval administrator and celebrated diarist Samuel Pepys (1633–1703) and King George II (1683–1760). In 1817, its text leaves are mentioned in the Bibliographical Decameron of the prolific bibliophile, the Reverend Thomas Frognal Dibdin (1776–1847):

'…among the Royal MSS. in the British Museum, (Bibl. Reg. 2 D. XL) there is a thin folio volume of Hours, of exceedingly delicate vellum, with a noble bottom and side margin, having a small text of only 18 lines….which exhibits vastly pretty side borders of fruit and flowers; worth the attention of any artist to copy, who is in pursuit of specimens of this nature …'.

Lithographs of several of these leaves were published in 1849 in the early facsimile compendium The Illuminated Books of the Middle Ages, by Henry Noel Humphreys and Owen Jones.

In 1835 the German art historian and curator Gustav Waagen (1794–1868), a principal early authority on Northern Renaissance art, first noticed the miniature of Louis XII of France Kneeling in Prayer (now J. Paul Getty Museum) in the legendary collection of William Beckford (1760–1844), the builder of Fonthill Abbey. With characteristic acuity, he attributed it to Jean Fouquet or a follower of his. The Scottish landowner John Malcolm of Poltalloch acquired the miniatures of The Virgin of the Annunciation, Pentecost and Job on the Dungheap (now British Library) in 1891–3, and a few years later they entered the British Museum with the rest of his superb collection of Old Master drawings. The calendar leaves for February, June, August and September were bought from a London bookseller in 1917 by the Philadelphia lawyer John Frederick Lewis, whose widow gave his collection to the Free Library of Philadelphia. Six more miniatures from the Hours came to light in England between the Second World War and the early 1970s: The Nativity (Victoria and Albert Museum), Saint Luke Writing (National Library of Scotland), The Visitation (Bristol City Museums and Art Gallery), Bathsheba Bathing (J. Paul Getty Museum), The Flight into Egypt (private collection) and The Adoration of the Magi (Musée du Louvre). The Presentation in the Temple (J. Paul Getty Museum) came from the New York dealer H.P. Kraus, and a further miniature of The Betrayal of Christ belonged to Georges Wildenstein (1892–1963), whose collection of manuscript leaves was later given to the Musée Marmottan in Paris.

A masterpiece of Renaissance painting

The Hours of Louis XII established a new convention of scale for books of hours. Its dramatic full-page miniatures are startling in their originality, with three-quarter length figures which seem to burst forth from their painted frames, like those of oil paintings. These are inscribed, in capital letters, with the opening line of the prayer which continues overleaf in the body of the text. It is now clear that this long-dispersed manuscript provided the model for the Grandes Heures of Louis' wife, Queen Anne of Brittany, finished in 1508, for which Bourdichon received payment of 1,050 livres tournois: the equivalent of about 4 years' salary of a member of the royal household. The Queen's book has long been recognized as a principal work of French Renaissance manuscript illumination. In comparison, the Hours of Louis XII was less ornate, and the disposition of its full-page miniatures, which mostly faced the closing page of the previous section of text, rather than the opening words of the following prayers, was not entirely satisfactory. However several of the miniatures in the Hours of Anne of Brittany repeat, with little variation, compositions from the King's book. In these cases, the doll-like figures in the later manuscript lack the vigorous monumentality of such earlier compositions as The Virgin of the Annunciation, Saint Luke Writing and The Flight into Egypt. The lighting effects in the King's book are brilliantly orchestrated, attaining a high point in its miniature of The Nativity. Here, the golden divine illumination is echoed in the starry sky and highlights the figures, background landscape and structure of the manger, in purposeful contrast to the flat beam of mundane white light thrown by Joseph's lantern. Its most startling miniature is the voluptuous image of Bathsheba Bathing, which exemplifies a distinctly northern aesthetic of the nude. The Hours of Louis XII heralds a new departure in Bourdichon's stylistic development, at the moment when French court painters were directly confronted by the novelties of Italian art.