The Ceramics galleries: old and new

The Ceramics galleries: old and new 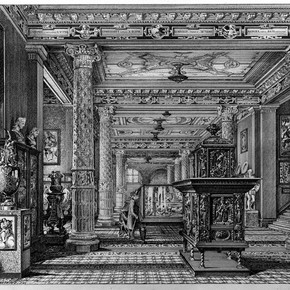 The V&A's first ceramic galleries shown in an engraving by John Watkins, 1876

The first ceramic galleries of the South Kensington Museum (now V&A) opened in 1868 in what are now the Whiteley Silver Galleries (Rooms 70a and 65-69). Signs of the former use of these galleries are still visible - notably the high-level painted frieze bearing the place-names of centres of ceramic manufacture from 100 - 1715 A.D. Ten columns clad with Minton 'majolica' reliefs continued the design theme begun a few years earlier in the elaborate West or Ceramic Staircase.

The reliefs on the two columns nearest the Ceramic Staircase have recently been reinstated but fourteen stained glass windows by William Bell Scott are no longer in place. The windows illustrated scenes of past ceramic manufacture appropriate to the dates of the cased displays sitting alongside.

The ceramics collections were moved in 1909 to the new building designed by Sir Aston Webb which forms the grand southern frontage of the Museum. The ceramics galleries (133-145) were purpose-built on the top floor (level 6) with roof glazing allowing the tones of the various ceramic bodies and glazes to be clearly distinguished from each other under natural light whenever possible. 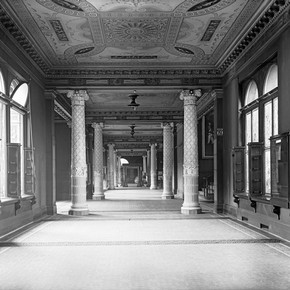 The first ceramic galleries looking towards the West or Ceramic Staircase. Photograph taken in 1910 following the move of the ceramics collections. Some of the Bell Scott windows are visible to the right.

The collections were packed away during the Second World War but their arrangement following post-war reinstatement remained essentially the same until the current major redevelopment. In bronze-framed wall-cases and serried ranks of Victorian and Edwardian rectangular cases with hardwood frames and legs, the collection was until 2005 arranged geographically, with Middle Eastern ceramics at one end and Chinese at the other flanking the European and English galleries between.

Within this framework, earthenware and stoneware was kept separate from porcelain and within each of these areas, wares were arranged by country, type of ware (e.g. tin-glazed earthenware, cream-coloured earthenware) and production centre or factory.

The French ceramics were displayed in a similar way in Room 128 (since 2003 the Architecture Gallery), with earthenware at one end and porcelain at the other. Being directly below Room 143, the French collection was thus rather strangely detached from the main run of ceramics galleries. 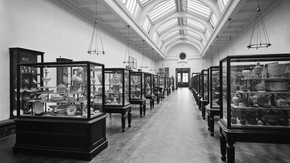 The new ceramics galleries (2009/10) in Rooms 136-146 seek to redress several problems which had arisen over the years with the previous arrangement outlined above. The presentation had become somewhat cluttered, confusing and tired. Despite periodic attempts at replacing very minimal post-war labelling, clear interpretation was lacking which in turn led to reduced footfall in the galleries.

Charming though the old wooden cases were, their locks were prone to jamming and the heavy end panels with their non-safety glass had to be lifted right off by curators to gain access to the objects. Above all, these cases proved vulnerable to theft and this became the catalyst for change. 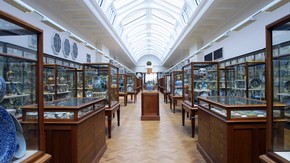 The new galleries tell the significant 'stories' of ceramic history, involving for the first time a juxtaposition of Asian and European ceramics to explain their inseparable influence on each other. The processes involved in turning raw clay into an infinite variety of ornamental and useful wares are fully explained and facilities provided for an artist-in-residence to demonstrate how it is done. A room has been devoted to architectural ceramics and a new temporary exhibition gallery has been created where originally the ceramics and glass curatorial upper level offices once stood.

Ceramics have also always had a prominent presence in the Museum's Art and Design (formerly 'Primary') Galleries such as the British Galleries, Jameel Gallery of Islamic Art, and Toshiba Gallery of Japanese Art to name a few. 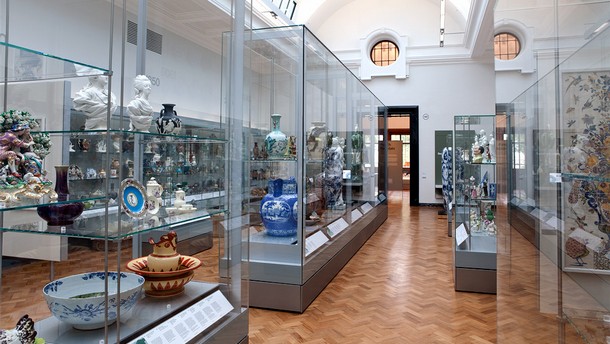